Is This S'pore's Most Expensive House?

The mansion mired in a legal battle between the Brunei Sultan's brother and
the country's national investment agency could well be Singapore's most expensive residence. 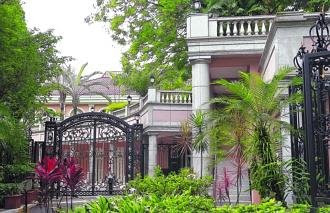 The palatial residence of Arwaa Mansion is certainly fit for a prince and comes with a suitably intimidating value. It was built by merging two pieces of property with different addresses. This photo shows the part of the mansion at 46B Nassim Road. -- ST PHOTO: LIM WUI LIANG

Owned by Prince Jefri Bolkiah, the younger brother of Sultan Hassanal Bolkiah, Arwaa Mansion at 46B and 48 Nassim Road is said to be worth at least a jaw-dropping $120 million.

That figure for a home, even in land-scarce Singapore, is not something you hear about every day. Even property pundits that The Sunday Times spoke to were hard-pressed to think of a residential address that could fetch that kind of value.

Based on the Urban Redevelopment Authority's numbers, the average cost of a good-class bungalow was $13.8 million last year.

What could possibly make the Brunei royal's Nassim address worth that princely sum? Size, location, possibly even its pedigree ownership.

Industry observers believe that the palatial property, which stands on top of a hill, has such a staggering value because of its sheer size.

The mansion sits on a land area of about 110,000 sq ft. The area was the result of merging two pieces of property with different addresses. Imagine 92 five-room HDB flats combined.

'It is part of Singapore's most desirable and prestigious residential area,' said Savills Singapore's director of prestige homes Steven Ming.

'But each property value is unique,' he said.

And this none-too-humble villa is special because, well, it belongs to a prince.

'You would assume that only good-quality stuff went in there, so there is a premium attached to it,' said one industry pundit.

The mansion made news last Friday after it was reported that the Brunei Investment Agency, which manages the Brunei government's General Reserve Fund and external assets, wants Singapore's courts to get the 53-year-old prince to hand over the property.

Homes in the $100 million club are few and far between.

Said Credo Real Estate managing director Karamjit Singh: 'Over the years, governments and corporations that have owned large properties have been selling them and they get re-developed and sub-divided. So such big properties are very rare.'

'Some are sitting on land that has been passed down for generations and it goes into the $100 million category because you can build 20 storeys on it,' said Mr Ku Swee Yong, the director of business development and marketing for Savills.

He singled one out: Mitre Hotel in Killiney Road, which some have estimated could fetch $200 million for its nearly 40,000 sq ft of land. Its prime location and plot ratio mean it has good redevelopment potential.

Size isn't the only thing that matters when it comes to how many zeroes go into a property's value. In areas like Katong, property can fetch a premium since plot ratios there are higher than those in town, like in Nassim. That means more units can be built.

Dr Della Suantio Lee, the wife of Mr Lee Seng Gee, the eldest son of late philanthropist Lee Kong Chian, was said to have sold a 115,300 sq ft piece of property in Meyer Road to the Hong Leong Group for about $200 million last year.

Even fengshui plays a part, albeit a much smaller one.

'Some wealthy Chinese businessmen will consider how wide the gate at a bungalow is, whether it's sloping up or down or whether it faces a good house,' said Mr Ku.
Posted by Richard Yeo at 6:12 PM No comments:

CAPITACOMMERCIAL Trust (CCT) expects financing to become more expensive after it raised US$1.2 billion to fund an acquisition of an office tower this year.

The manager of about three million square feet of commercial space in Singapore agreed in March to buy a 23-storey office block known as 1 George Street in Singapore's business district for $1.17 billion. The trust said it will fund the acquisition with debt such as convertible bonds and medium-term notes.

'We raised the debt at the right time before the increase in rates, but going forward, we see that as a greater challenge,' chief executive officer Lynette Leong said at a real estate conference in Singapore this week.

CapitaCommercial Trust's shares have fallen 21 per cent this year on concern that borrowing costs for the trust may rise, prompting Citigroup to downgrade the stock earlier this month.

Asia's real estate funding costs are likely to remain high over the next 12 months after rising as much as 700 basis points in the past year, Sameer Nayar, head of real estate finance at Credit Suisse Group, said this week.

CapitaCommercial said in April it plans to sell $280 million of bonds, with an option to raise another $90 million. It also issued $150 million of medium term notes and took on loans for the acquisition. -- Bloomberg
Posted by Richard Yeo at 1:18 AM No comments:

Thakral Seeks Up To $99m For Rest Of Sovereign Units

THAKRAL Land is selling the remaining 17 apartments it owns at The Sovereign, a freehold condo in Meyer Road that it developed more than a decade ago. 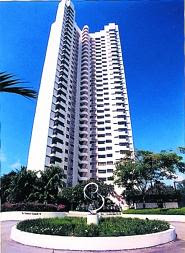 En bloc potential: The 15-year-old property is built up to 1.8 plot ratio, lower than the maximum 2.8 allowed currently

Thakral is open to selling the units individually or to a single party. Market watchers reckon a bulk buyer who takes the whole 17 apartments would get some discount.

All the units are leased or about to be leased. Based on current monthly rents of $3.20 to $4.50 psf, the net yield works out to around 2.5 per cent, says Jones Lang LaSalle's Singapore and South-east Asia managing director Chris Fossick, whose firm is sole marketing agent for the 17 apartments, each of which has four bedrooms.

A party that buys all 17 units may also hold the key to a potential collective sale of the condo, which has a total of 87 units. The 17 units that Thakral is offering represent 19 per cent of share value and about 26 per cent of the total sq ft area.

There is redevelopment potential as the site's current Masterplan plot ratio - ratio of maximum potential gross floor area to land area - is 2.8, which is higher than the 1.8 plot ratio tapped by the existing property.

The unutilised plot ratio may be tapped by building an additional block or tearing down the existing project and redeveloping the 143,918 sq ft site into a brand new condo.

The 30-storey Sovereign, at 99 Meyer Road, received its Temporary Occupation Permit in 1993.

It is next to a 115,300 sq ft plot of land at 97 Meyer Road sold by Della Suantio Lee last year to Hong Leong Group for around $200 million. The price worked out to around $760 psf of potential gross floor area, including development charges (DC), according to an earlier report.

Dr Lee is the wife of Lee Foundation chairman Lee Seng Gee.
Posted by Richard Yeo at 1:14 AM No comments:

SPH's Paragon Valued At $2b

SINGAPORE Press Holdings' Paragon shopping centre in Orchard Road is now worth $2 billion, about 10 per cent up from its valuation of $1.82 billion a year ago.

'Rents are firm, increasing as of last June. Occupancy is at 100 per cent,' said Lydia Sng, executive director of valuations for property consultancy Knight Frank, which carried out the latest valuation yesterday. The earlier valuation of $1.82 billion on June 28, 2007, was also done by Knight Frank. 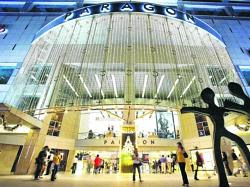 The Paragon: Undergoing a makeover as part of a continuous effort to enhance the retail environment and shopping experience for customers

The Paragon is undergoing a $45 million makeover to update its facade and increase retail space. The renovation is slated for completion in October.

SPH said earlier that the makeover was part of a continuous effort to enhance the retail environment and shopping experience for Paragon customers.

In addition, the commercial space above its retail podium will be expanded - at a cost of $37 million, including the payment of land premium. This is scheduled to be completed by end-2008.

The total cost of the facade makeover and the addition of commercial space is $82 million.

Paragon remains open and operates as it normally does during the renovation period.

SPH will be releasing its financial results for the third quarter ended May 31, 2008, on July 11.
Posted by Richard Yeo at 1:08 AM No comments: