假设这项拟议中的收购行动在2006年4月1日完成，A-REIT的每单位可派发收入将增加0.15分。
Posted by Richard Yeo at 10:32 PM No comments:

After five years of construction, the Kim Chuan Depot is now ready to provide support for the upcoming Circle and Downtown MRT Lines. 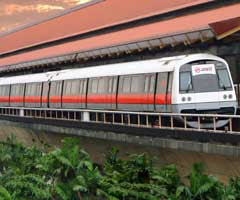 The underground structure will provide stabling of the trains, maintenance and operational control of the two rail lines.

Kim Chuan Depot is Singapore's first underground depot - in fact, 17 metres down under.

Measuring 11 hectares, or the size of 17 football fields, the depot is also the world's largest. 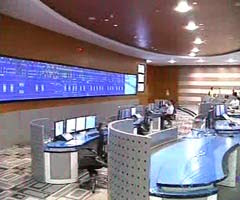 The $290 million depot will house several state-of-the-art facilities like its Operation Control Centre which will be manned by nine operators at any one time.

Their role is to supervise the day-to-day operations of the trains and stations.

They can also communicate with passengers onboard trains, monitor CCTV images, or shut down the system if there is an emergency.

Commuters will have a smoother ride too, with the help of what's called a cripple siding located between the two rail tracks.

Ong Boon Ann, Land Transport Authority's deputy director for Circle Line Systems, said: "When there's a defective train, a train that malfunctions, it can be moved to be parked at the cripple siding. This way, it will not impede any on-coming trains." 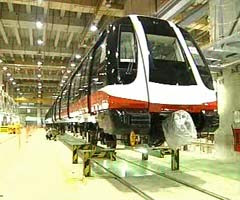 Trains will be sent for maintenance at a workshop in the depot, and to facilitate checks, they will be hoisted by a special lifting system, considering that each train comprises three carriages and weighs about 120 tonnes.

The Land Transport Authority says 16 trains have arrived at the depot so far. Another 24 will be delivered by the end of this year, three months earlier than planned. The depot can accommodate 77 trains.

The facility has a 23-metre high automatic storage and retrieval system, a first for a train depot.

The depot also has a central warehouse for the Circle Line, storing three to five years worth of materials and spare parts needed for the maintenance work.

The place is packed with subterranean activities, but the ground level will not be neglected. About three hectares of land left empty will be used for light industrial development which can have buildings of up to nine storeys. - CNA/ir

Share your views and comments on the latest transport proposals here
Posted by Richard Yeo at 10:57 AM No comments:

$19m Waterfront Oasis TO Be Built In Woodlands 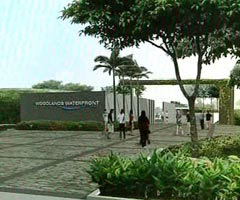 The Urban Redevelopment Authority (URA) has unveiled a S$19m design plan to build a coastal promenade and park in their neighbourhood.

Woodlands will certainly live up to its name with URA's "Woodlands Waterfront" proposal, where more lush greenery, trees and woods will be planted.

A nine-hectare park will be created from vacant land along the coastline, featuring playgrounds, picnic areas and nature trails to cater to different recreational needs.

Right next to the park is a 1.5-kilometre long promenade that will offer unobstructed views of the Johor Straits. 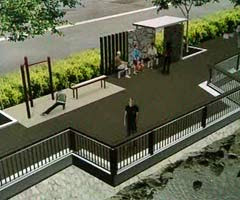 To allow visitors to be closer to the water, an old jetty connected to the park will be refurbished as well.

On why the waterfront idea was mooted, head of the project at URA, Wan Khin Wai, said: "In Woodlands today, you'll find that this is one of the towns that are located along the coastline. However if you're inside of it, you can't appreciate the coastline. So, this project offers residents (the chance) to get to the coastline and have recreational activities there." 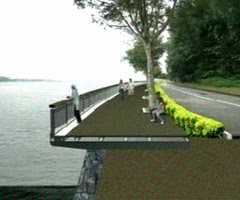 "Singapore is an island, surrounded by water on all sides. The waterfront is an important asset. So, in the planning of parks and waterbodies plan, we have capitalised on all these so that we can generate recreation space for Singaporeans to enjoy."

A Woodlands resident, Mrs Chow, is looking forward to the new amenities. "The plan's very good because so far, we don't have any of these things around our area. If you want to have this kind of places, we have to travel all the way to the east side."

The Woodlands Waterfront is also something Dr Tony Tan, an ex-MP of the area, will definitely look forward to as it was his dream to have it.

"He shared his dream of using the waterfront....bring in water sports, water activities, and let the residents enjoy the waterfront and have a good view of Johor Baru, our closest neighbour. It has been one of his (Dr Tony Tan's) dreams for Sembawang," revealed Health Minister Khaw Boon Wan, who is an MP for Sembawang GRC. - CNA/938LIVE/ir
Posted by Richard Yeo at 10:51 AM No comments:

FOR the past two years, Miss Ginny Goh, 28, has been leaving her home in Sin Ming an hour before she has to report for work in her Shenton Way office.

The tax consultant waits about 10 minutes to catch a bus for the 15-minute ride to the nearest MRT station in Bishan. From there, it takes her another 20 minutes to travel to Raffles Place MRT station.

But with two new MRT lines in 2020, commuters like Miss Goh will be able to shave 20 minutes off their daily commute to the city, said Transport Minister Raymond Lim on Friday.

The Thomson Line will join Woodlands to Marina Bay, while the Eastern Region Line will connect Changi to Marina Bay via Marine Parade. They will pass through neighbourhoods such as Sin Ming and Siglap that are currently not served by the MRT.

Miss Goh welcomes the news, as walking to the new train station will 'definitely be more convenient' than having to take a feeder bus.

The inconvenience of having to wait for a bus to take them to the nearest MRT station is a common grouse shared by commuters living in such areas.

Mr Tong Chek Suan, 40, a mechanic who lives in Changi Village, says he usually waits up to 25 minutes for Service 89 which goes to Pasir Ris MRT station.

During peak hours, Mr Quek can take up to 45 minutes to get from Changi Village to Tanah Merah MRT station, a trip which takes 19 minutes during off-peak hours.

Commuters like Mr Benson Ang, 46, a businessman, prefer taking the MRT to buses because 'it's more efficient. The waiting time is more fixed'.

Others, like Miss Gwendolyn Loh, 32, a corporate communications manager whose Sin Ming neighbourhood will see a MRT station, are rejoicing for a different reason.

'Now my flat will increase in value!'


Getting to the city

THE two new MRT lines will benefit residents of neighbourhoods such as Changi Village and Sin Ming. The Sunday Times tested out the current routes to the city from those two locations to see how long they take and how much they cost.