Singapore saw the sharpest declines in office rentals in the first quarter amid the global downturn, compared to other Asian markets. 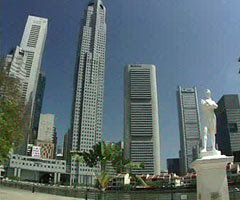 Singapore saw an 18.6 per cent drop in rents for the first three months of 2009, compared to the previous quarter. This is the biggest decline in the region.

The second sharpest fall was recorded in Hong Kong, where rents dropped by 14 per cent on-quarter.

Despite the weak performance in the first quarter, CBRE said there are signs that demand is stabilising and business sentiment is turning slightly more positive.

Nonetheless, the consultancy firm said market outlook remains challenging and the decline in rentals is expected to continue.

It believes the pace of decline will slow and leasing activity will begin to pick up, especially when companies become more certain about their short-term business plans. - CNA/so
Posted by Richard Yeo at 12:29 AM No comments:

Price said to be about $1,180 psf, which puts it below the purchase price

THE China buyer who failed to make outstanding payment to MCL Land for 20 units at The Fernhill when the project received its Temporary Occupation Permit recently has sealed a deal to sell 19 of the units. 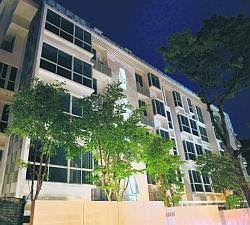 The Fernhill: Developer MCL will book profit on units involved in Q2 if it receives payment from Concordia by May 26

MCL Land in its filing with the Singapore Exchange yesterday did not give the price fetched by the China investor Concordia Overseas Pte Ltd, which MCL did not identify in its statement.

However, BT understands the price was about $1,180 per square foot, below Concordia's purchase price.

The Fernhill is a five-storey freehold project with a total of 25 units at the corner of Orange Grove and Fernhil roads. Concordia Overseas, controlled by Hong Kong resident and Singapore PR Chan Ki, had bought all 25 units on a deferred payment scheme (DPS) from MCL in January 2007 for $1,410 psf, paying an initial 20 per cent of the purchase price to MCL. Concordia later subsold five units to foreigners at an average price of about $2,200 psf, leaving it with the remaining 20 units.

Some sources were surprised that MCL's statement yesterday indicated that Concordia had sold only 19 units. They had learnt that Concordia inked a sale and purchase agreement late last week to sell all its remaining 20 units to a group of local investors and the lumpsum investment was said to be about $39 million.

'The units may have been sold individually, with each investor in the group taking a few units,' a property industry observer suggested.

The completion of the sale of the apartments by Concordia to the new buyers is slated to take place ahead of the expiry on May 26 of a 21-day notice that MCL will serve today to treat its sale and purchase agreement with Concordia as having been repudiated by the latter.

This was after Concordia failed to pay up an outstanding amount - equivalent to 65 per cent of its purchase price on the 20 units - by yesterday, 14 days after the due date for the payment.

If Concordia manages to pay up by May 26, MCL cannot forfeit the 20 per cent of the $1,410 psf purchase price that it collected from Concordia back in 2007, and re-sell the units. The Hongkong Land subsidiary will then recognise the revenue and profit from the sale of the units in its second quarter results.

Going by information in its Q1 results statement last week, it should be able to book US$31 million in revenue and US$9.3 million net profit on the 20 units in its Q2 results.

In its Q1 results statement last week, MCL Land said that for The Fernhill, it booked profit on only five units for which it received the outstanding purchase price by the payment date.

BT reported earlier that the buyers of these five units had picked up their units in the subsale market from Concordia at an average price of nearly $2,200 psf. MCL did not extend DPS to these subsale buyers.

While Concordia will be incurring a loss from the subsale of the 19 units, it reaped handsome gains on the five units it subsold back in 2007.
Posted by Richard Yeo at 12:27 AM No comments:

ONCE found only in places like shopping malls and hotels, bubble lifts are going up in the world at Housing Board blocks. 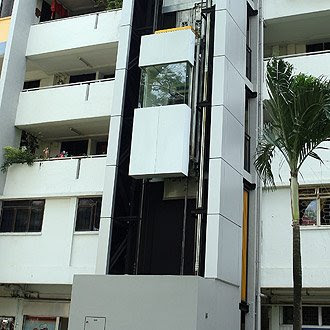 Residents of Block 46 at Owen Road have been enjoying the view from their very own glass lift. -- ST PHOTO: LAU FOOK KONG

Since January, residents of Block 46 at Owen Road, near Farrer Park, have been enjoying the view from their very own glass lift - the first of its kind in an HDB block.

As part of HDB's Lift Upgrading Programe (LUP), four other blocks in the precinct will be fitted with ten such lifts, which will be ready for use by July.

These lifts are different from conventional ones as they have transparent glass panels along their walls. Instead of being enclosed, they have a shaftless design.

As part of a pilot trial by HDB, the bubble lift will find its way to 19 HDB blocks in areas such as Jurong East Street 24, Buffalo Road in Little India and Sims Drive in Aljunied.

Depending on the residents' receptiveness as well as the lift performance, bubble lifts might be popping up all over Singapore.

Read the full story in Thursday's edition of The Straits Times.
Posted by Richard Yeo at 12:17 AM No comments:

Green Technologies To Win You Over

SINGAPORE'S nascent green building industry is set to get a boost from a new event in October which will showcase the best of the Republic's technologies. 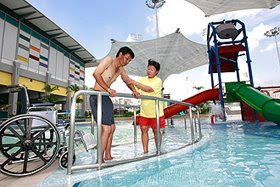 The Building and Construction Authority (BCA) yesterday announced that it will hold the inaugural International Green Building Conference on Oct 28.

The three-day event aims to attract 1,000 participants from around the region.

BCA director of technology development Tan Tian Chong told reporters yesterday the event will help realise Singapore's goal of greening 80 per cent of all its 15,500 buildings by 2030 from the current 1 per cent.

This was one of the targets outlined in a blueprint on sustainable development unveiled by the Government last week.

'Such events will continue to raise the awareness and adoption of environmentally friendlier, more sustainable designs, materials and construction methods among builders and developers in the region,' he said.

The conference will be held in partnership with BEX Asia, a green building exhibition organised by events firm Reed Exhibitions, which expects to attract 5,000 participants from more than 16 countries.

Mr Ashvinkumar Kantilal, president of the Singapore Institute of Architects, another event partner, said yesterday that architects have seen a big rise in the number of developers requiring green features in their buildings.

'The buy-in from the industry has been very rapid, as building owners recognise the potential savings from building green,' said Mr Kantilal, adding that this has been aided by cash incentives given out by the BCA to building owners.

The success of Singapore's Green Mark scheme, used to rate a building's environmental performance, has even led Malaysia's building industry to work with local players here to develop its own green building scheme, he added.

The BCA will also be opening Singapore's first zero-energy building at the conference. The complex will have a net zero energy consumption over a year, made possible by solar panels covering an area of 1,300 sq m which will be integrated on the roof of one of the buildings.
Posted by Richard Yeo at 12:14 AM No comments:

Overseas Union Enterprise (OUE) and its master tenant at the Grangeford condo have been instructed to restore the apartments to their original condition. Ideal Accommodation, the master tenant, had subdivided apartments into smaller units resembling a dormitory layout. 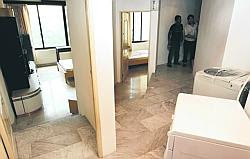 The view inside: Ideal Accommodation split 140 of the 170 Grangeford apartments leased out by OUE into 600 units resembling a dormitory layout

'Urban Redevelopment Authority has investigated and taken enforcement action against the persons responsible for the unauthorised use of Grangeford Apartments.

'Enforcement notices have been served on the persons responsible to discontinue the unauthorised use and restore the apartment units to their approved condition,' a URA spokeswoman told BT.

OUE and Ideal could face penalties if they do not act within the time frame stipulated by URA.

BT understands the enforcement notice was served towards the end of last month.

The paper reported last month that a fully owned subsidiary of OUE had signed a two-year lease with effect from Jan 1, 2009 with Ideal for 170 apartments at the condo at Leonie Hill. Of these 170 apartments, Ideal split 140 apartments into a total of 600 units. Most had no access to rubbish chutes. Kitchen and living room areas were boarded up to create new units. Tenants of some units have to share toilets.

Last month, URA had indicated that change of use of Grangeford's apartments from residential use to boarding house/dormitory use was not allowed.

OUE bought Grangeford through a $625 million collective sale struck during the market peak in 2007. With the property slump, OUE decided against redeveloping the project for the time being and opted to lease out the existing 193 apartments instead. It managed to rent out 22 apartments before it signed a master lease with Ideal for the 170 apartments.

BT noted in its reports last month that owners of apartments in other developments have also carried out similar subdivisions, though on a much smaller scale.

With the swine flu alert, the issue has become more critical as the overcrowding could pose a health hazard and contact-tracing could be difficult on account of transient tenants, as a letter writer living in People's Park Complex pointed out in The Straits Times Forum pages on Monday.
Posted by Richard Yeo at 12:10 AM 1 comment: 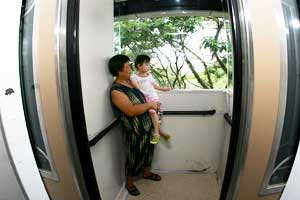 政府在2001年推出电梯翻新计划，让1990年前建造的组屋每层楼都有电梯停留，并定下让所有符合翻新条件的组屋在2014年完成翻新工程的目标。
Posted by Richard Yeo at 12:03 AM No comments: