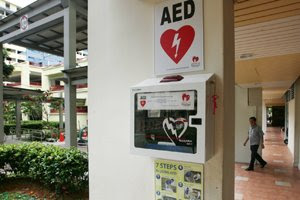 新加坡心脏基金曾在2007年表示，希望每四户人家中就有一人懂得实施心脏复苏术。不过据了解，主动以个人身份前往接受心脏复苏术培训的人并不多。
Posted by Richard Yeo at 11:23 PM No comments:

高盛最近的报告也认为，尽管成交量反弹，“稳固的房地产市场依然遥不可及”。高盛高华分析师表示，“考虑到库存，经测算，成交量维持同比50%增长，房价在四季度才能稳住。”
Posted by Richard Yeo at 11:21 PM No comments:

程立澜认为，只要中国经济稳定下来，同时有利房地产政策维持不变，那么预期房地产销售量还将会持续回弹。他预期房价最快在今年底或明年初就会反弹。
Posted by Richard Yeo at 12:14 AM No comments:

New malls may be springing up along Orchard Road this year, but old favourites are sprucing up their act. Paragon shopping centre has undergone a $45-million revamp, for example. The 10-year-old mall, known for its luxury goods, now sports a three-dimensional facade with multiple pop-out glass panels and multi-faceted aluminium panels.

These changes are expected to be completed by the third quarter of next year. Tod's leads the pack as it will unveil its duplex next month.

Paragon's general manager, Ms Linda Kwan, says the new design was prompted partly by luxury retailers looking for space to expand and do something different. In May, Jimmy Choo will open its flagship store in the mall and Coach is set to do the same in November.

Ms Kwan says: 'Paragon has secured stronger positioning as an upscale shopping mall with its diverse mix of international brands.'

Another shopping destination, Meritus Mandarin hotel's retail arcade, Mandarin Gallery, is undergoing a $200-million expansion and will reopen by the fourth quarter of this year. The mall will dazzle with duplex boutiques that have floor-to- ceiling windows lining the building facade.

Two other retail spaces getting a new look this year are The Heeren Shops and Park Hotel Orchard.

The open-air area in front of The Heeren will make way for a 15m, single-storey glass structure. McDonald's and New York New York cafe are among the eateries to be housed in it.

At Park Hotel Orchard, some tenants such as Starbucks have moved out. Replacing them are high-end boutiques which will take up 7,710 sq m in its retail podium.
Posted by Richard Yeo at 12:11 AM No comments: