But it is too early to call a recovery, cautions OCBC Investment Research 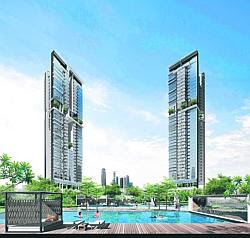 8@Woodleigh was launched just two weeks ago. Woodsville 28 was launched in July 2008 but most units languished until the buying momentum returned to the market this year.

Over at the freehold Vista Residences - on Jalan Dusun and Jalan Datoh at the corner of Thomson Road - prices start at $960 psf. The project will be officially launched tomorrow, but Far East released 88 units at a weekend preview, and 85 per cent of them were snapped up. 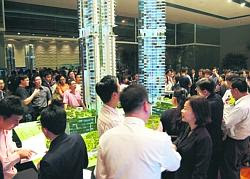 Strong showing: Vista Residences will be officially launched tomorrow, but Far East released 88 units at a weekend preview, and 85% of them were snapped up

While units at Vista Residences have sold for more than homes in the nearby The Arte - a City Developments project where units were launched at an average price of $880 psf in March - the difference in pricing is due to the difference in unit sizes and floor plans, analysts say.

'Vista Residences offer smaller size units that command higher psf pricing and also smaller balcony space than The Arte,' OCBC Investment Research analyst Foo Sze Ming said in a note yesterday. 'As such, we caution that the strong buying momentum at higher psf pricing for the new launch should not be viewed as a new uptrend for property prices.'

Mr Foo said that it is too early to call a recovery in the property market. 'We remain unconvinced by the recent 'recovery' in the physical property market,' he said.

'We believe buying strength over the recent weeks could have been driven by the spillover effect from earlier pent-up demand that drew cash rich local investors back into the market. In our view, potential catalysts for price increase will have to come from an inflow of foreign funds into the property market, as well as a pick up in employment opportunities.'

Foreign funds were the driving force of the property boom in 2007, but have not come back to the market in a big way.

Looking ahead, more mass-market and mid-market launches are expected in the coming weeks, including Oasis@Elias, a 388-unit, 99-year leasehold project at Elias Road by Chip Eng Seng, and The Gale, a 329-unit, freehold project at Flora Road by Tripartite Developers.
Posted by Richard Yeo at 11:54 PM No comments:

Existing Home Prices In Spain Fall As Much As 4.5% In Q2

(MADRID) Asking prices for existing homes in Spain dropped by as much as 4.5 per cent in the second quarter from the previous three months, Idealista.com said yesterday, as lenders granted fewer mortgages and unemployment increased.

The prices asked by sellers in Spain's biggest cities fell on average by 1-3 per cent, Idealista said in an e-mailed statement. The biggest decline, in the cities of Cadiz and Ciudad Real, was 4.5 per cent.

House prices soared 120 per cent between 1997 and 2007 as falling interest rates, rising employment and economic growth averaging 3.8 per cent a year boosted Spaniards' spending power. Price gains began to slow in 2007 as the global credit crisis took hold and started falling in July 2008 as overbuilding caused the supply of homes to outstrip demand.

Units in mass- and higher-market projects snapped up.

STRONG sales in the property market continued over the weekend as mass- and upper-mid- market launches drew crowds of buyers. 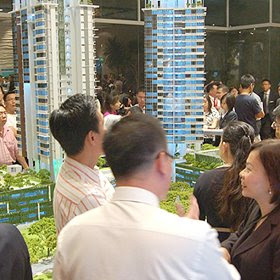 Far East Organization sold 74 of its initial batch of 88 units at a preview of its Vista Residences over the weekend. -- PHOTO: FAR EAST ORGANIZATION.

Opposite the condo at Devonshire Road, Allgreen Properties' One Devonshire has sold more than 95 per cent of its 36-storey, 152-unit freehold condo since its launch about two weeks ago.

In the Thomson Road area, Far East Organization sold 84 per cent - or 74 homes - of an initial batch of 88 units at a private preview of its Vista Residences over the weekend.

The 280-unit freehold project offers a range of accommodation from one bedroom to penthouse units starting from $960 psf.

'This is undoubtedly due to the stock market rally, more positive sentiment, and is enabled by the interest absorption scheme,' he said.

The scheme allows buyers to pay a deposit and postpone monthly home loan payments until the project is completed.

'This is attracting the investors to come out in droves,' he added.

In the mass market, sales continued with Frasers Centrepoint announcing yesterday that its two projects, 8@Woodleigh and Woodsville 28, were sold out.

At Pasir Ris, half of the 142 units at Chip Eng Seng group's Oasis@Elias previewed over the weekend were sold, said its marketing agent CB Richard Ellis.

On the east coast, the 94-unit Parc Seabreeze in Marine Parade is selling well with the project close to 70 per cent sold, said HSR, which is marketing the project. Units are fetching from $1,050 psf to $1,550 psf.

Mr Colin Tan, Chesterton Suntec International's head of research and consultancy, noted that there had been 'pent-up demand' resulting in strong sales activity, but added that this was 'not sustainable'.

'Unlike the boom years, where foreigners made up a huge number of buyers, it is mostly locals who are on this buying spree,' he said.

Property expert Nicholas Mak expects a moderation of buying activity in the coming months, especially as developers continue to revise their prices upwards.
Posted by Richard Yeo at 11:45 PM No comments: