HSBC has cut its growth forecast for the Singapore economy this year to 5.8%, from the 6% projected previously. This is because of an anticipated slowdown in the second quarter. 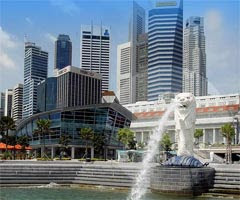 HSBC said two large consecutive drops in industrial production have triggered concerns about the second quarter's gross domestic product (GDP), although the declines were mainly due to the volatile pharmaceutical sector.

However, there are some potential bright sparks.

In addition, the strong trend of rising public housing prices will also help to offset the negative wealth effects of a weak equity market.

So HSBC believes there is a very good chance for the economy to bounce back in the third quarter.

The Singapore government's official forecast is for the economy to grow between 4 and 6 per cent this year.

The Trade and Industry Ministry is scheduled to release its advanced estimates for Singapore's second quarter economic growth next Thursday. - CNA/ms
Posted by Richard Yeo at 1:20 PM No comments:

Positive consumer sentiment and the Great Singapore Sale have provided some support for the retail property market in Singapore, according to property consultants DTZ.

It said given the general uncertain global outlook, tenants have resisted committing to higher rents, and this has kept the retail sector stable during the second quarter. 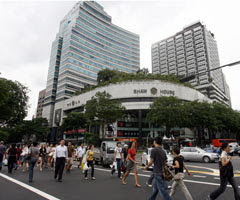 Going forward, analysts said they see at most a marginal increase of 2 to 3 per cent in rents for the rest of this year.

313@Somerset is part of the new wave of malls making a splash in Orchard Road. All together, some 5.4 million square feet of new retail space will be available by 2012.

Analysts said these new malls will lead the retail property rental market, while older ones will see rents stabilise at current levels, with little upside.

Donald Han, Managing Director, Cushman & Wakefield, said: "The new malls are looking at rentals higher than existing malls at Orchard Road. They're looking at anything from 20-30 per cent higher. Prime retail space is always in demand."

Cushman & Wakefield noted that there is little risk of oversupply as international retailers clamour for a piece of the Singapore market.

And although inflation may dampen domestic consumer spending, analysts said external demand from strong tourist arrivals is likely to offset that.

Mr Han said: "Into the next six months with the F1 arriving in September, we'll only see a higher number of tourists on shore, which will effectively see higher tourism receipts, (a) positive spillover in spite of high inflation numbers over the next six months or so."

With more malls fighting over the same tourism dollar, analysts said malls are starting to work harder to attract customers.

Turner Canning, Associate Director, Retail Consulting, Cushman & Wakefield, said: "(There is) a lot of criticism (that)... a lot of malls are cookie cutter, (with) similar shops, just in different configurations. You're going to see that changing. It's a global trend that malls are becoming more themed."

Bringing in new retail choices is also another trend.

This is in line with efforts by the Singapore Tourism Board to rejuvenate Orchard Road, turning it into one of the world's premier shopping belts.

Analysts also said there is no fear that the Orchard belt will cannibalise suburban malls, as they serve different markets.

Ms Chua said: "The suburban malls... are in the heartlands, near residents. (They are) easily accessible. They serve residents' daily needs, like groceries, daily wear necessities, personal services. These are complementary. In fact, the rentals in suburban malls can be as high as those in Orchard." - CNA/ms
Posted by Richard Yeo at 1:18 PM No comments:

I refer to last Friday's report, 'Illegal storey in house: Buyers lose case', about the couple who lost their case against the sellers of a 1 1/2-storey property. The Building and Construction Authority (BCA) had informed the parties that the property had an illegal storey added to it.

This was a case that was in the making for a long time.

Innocent parties have wasted resources when they are not familiar with the building rules and regulations and believe that the property they are purchasing has duly complied with such regulations.

The illegal structure may not be a mere transgression of building rules - where a backyard shed is built right up to the rear perimeter wall.

Situations may arise where neighbours are so much nearer to you because walls and roof eaves are being built with less than the permitted distance set back from the boundaries of the property.

Or your property is now less private because your neighbour is looking down at you from his third-storey bedroom window.

If rectification work is required for these transgressions, it could be very costly.

In the last 10 years or so, there have been a lot of renovation work all over the island. I have seen many renovations or reconstruction of houses which do not seem to abide by BCA rules.

I believe this may be attributed first to inconsistent application of these rules by the regulators.

Second, too much reliance on certification by the architect/engineers who submit the building plans and endorse that the plans have conformed with all aspects of building regulations.

Third, too little groundwork by regulators to confirm that the actual construction adheres to these regulations.

As an example, in certain housing estates, properties can be redeveloped but the new structure should not exceed 2 1/2 storeys.

However, it is evident when you drive around the housing estates that several of these renovated structures are actually three-storey buildings.
Posted by Richard Yeo at 1:00 PM No comments:

A STRING of new private residential projects is hitting the market as developers move quickly to capitalise on encouraging recent home sales. 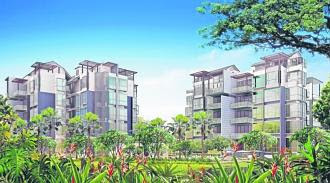 ON SALE: D'Pavilion, a freehold 50-unit project in Upper Serangoon Road, is priced at an average of $895 psf for this weekend's preview. It has two- to four-bedroom apartments and six penthouses. -- PHOTO: MCL LAND

More than 50 units have already been sold, said Mr Tony Bin, the chief executive of Centurion Properties, known until recently as Duchess Development.

Not far from Kovan Residences is another new project, D'Pavilion, priced at an average of $895 psf for the preview. This freehold 50-unit project in Upper Serangoon Road is within walking distance of Kovan MRT station. It has two- to four-bedroom apartments and six penthouses.

These launches come in the wake of healthy sales at the 348-unit Dakota Residences in Dakota Road. The developers, Ho Bee and ChoiceHomes, have sold about 150 units of the 99-year leasehold property for between $940,000 and about $3.38 million since they went on sale a fortnight ago.

The Sim Lian Group has also sold more than 200 units of the 308 launched units of Clover by the Park since its preview late last month. Transacted prices ranged from $582 psf to $877 psf. It has just launched for sale the remaining units at the 616-unit 99-year leasehold project in Bishan.

United Engineers is also ready to launch its condo-like Housing Board project in Ang Mo Kio Street 52, but it has yet to commit to a date.

Called Park Central, the project will have more than 550 units and comes under the HDB's Design, Build and Sell Scheme (DBSS).

A market watcher said the firm will have to launch it below the prices of the previous DBSS project in Boon Keng.

'They will have to learn from the Boon Keng project, which still has leftover units. When it was launched, many people came but not all later bought,' he said.

Launches will not be confined to mass- and mid-tier properties for long.

Next Tuesday, Hayden Properties will launch The Hamilton Scotts, its luxurious Scotts Road project with 54 apartments and two penthouses, which all come with private car porches.

Still, this new project and a few others such as the freehold 100-unit Newton Road project L'VIV, were already expected.

# Clover by the Park
Units: 616 units, of which 308 were launched earlier
Prices: Transacted prices for launched units ranged from $582 psf to $877 psf
Posted by Richard Yeo at 12:57 PM No comments:

Sales to PRs have rocketed in the past two years, say property agents, and the keen army of buyers is helping to keep prices buoyant in an otherwise-flat market. 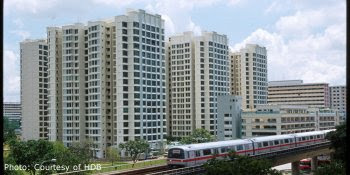 Property agencies PropNex and ERA Realty told The Straits Times that in recent months, about 20 per cent of total HDB home sales were driven by PRs.

This is a four-fold increase from two years ago, when PRs bought just 5 per cent of the homes sold, said ERA's assistant vice-president Eugene Lim.

Last year, PRs accounted for about 10 per cent of sales, said PropNex chief executive Mohamed Ismail.The sales figures are even more striking for smaller flats like three- or four-roomers, with PR buyers snapping up 45 to 50 per cent of the stock, added Mr Lim.

The three agencies command about 80 per cent of the HDB resale market.

Last year, 29,436 resale flats changed hands. If the volume holds for this year, it will mean about 6,000 flats could be snapped up by PRs.

The penny has dropped for Mr N.E. Shanmugam, who had been renting here for eight years.

He pays $1,200 for a three-room flat in Tampines and was initially looking for a bigger unit to move when his lease expired next month. But with rents shooting up, he faced a monthly outlay of $1,800 for a five-roomer.

'It didn't make sense. I'm better off buying my own home,' said the 56-year-old project manager, who is married with a one-year-old son.

Mr Shanmugam has just bought a five-room flat in Sengkang valued at $380,000. His mortgage will be $1,500 - well under what his rent would have been.

Singapore's burgeoning PR population - and their purchasing power - has been singled out as one of the factors driving HDB resale prices.

While private home prices inched only 0.4 per cent this quarter, HDB flat prices climbed 4.4 per cent, following a 3.7 per cent rise in the previous quarter.

Property agencies say about 70 per cent of the PR buyers are from China and India with the rest from countries such as Malaysia and the Philippines.
Posted by Richard Yeo at 12:55 PM 1 comment: