2,000 High-End Homes May Be Launched Soon

About 30 new condos may be launched by early next year, at least half of them in Orchard, Bukit Timah and Holland

SALES of new homes took a dive last month, but they might pick up soon as developers prepare to launch a string of projects over the next few months. 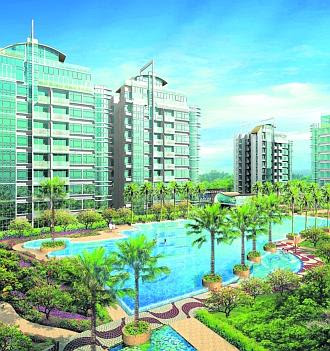 AMONG THE DEVELOPMENTS SCHEDULED to come on the market are The Cascadia in Bukit Timah (left) and Wilkie Studio in Wilkie Road. -- PHOTOS: ALLGREEN, CITY DEVELOPMENTS 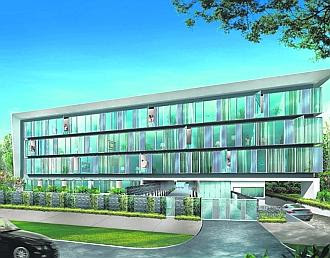 He estimates that more than half of the launches will be in the prime districts of 9, 10 and 11 - Orchard, Holland, Bukit Timah and Newton - as well as in luxury enclave Sentosa Cove. 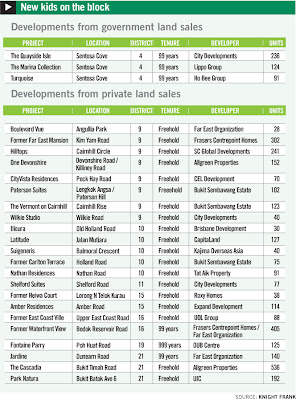 If all these projects are launched as planned, about 2,000 high-end homes could flood the market over the next six months, added Mr Mak. Broadly speaking, these are properties that will cost at least $2,000 per sq ft (psf), with a three-bedroom unit going for at least $2.5 million, he said.

'We are definitely counting on foreigners to come in and help absorb these homes, so we don't end up with an oversupply problem in the top tier,' he said.

Residential areas likely to be in the spotlight include Bukit Timah, Thomson, Holland Village and East Coast. This is because prices in these areas have not moved as much as those in areas such as River Valley, Newton and Orchard.

Mr Mak believes there will be few launches in the closely-watched mass-market segment until the middle of next year because developers started acquiring sites only recently.

'Most launches will come in nine to 18 months' time, and they are likely to be priced on the high side at $800 to $900 psf,' he said. 'Until then, most activity will be in the resale market, where a lack of new launches could push prices up significantly.'
Posted by Richard Yeo at 10:51 AM No comments:

THIS developer thought of a clever tactic that could save it nearly $300,000 in stamp duties in an en bloc buy. 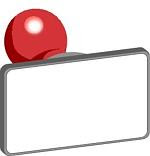 When challenged, it went to court, but lost and ended up having to pay the entire amount, plus costs.

It then decided to enter into a contract with each homeowner individually.

By not treating the deal as one transaction with a group, the company figured it could get the lower rates to apply 53 times over, and pay $286,200 less in stamp duties, court documents showed.

The Commissioner of Stamp Duties - who is under the Inland Revenue Authority of Singapore - took the stand that the en bloc sale was a single transaction, and so the company could enjoy the lower rates only once.

UOL Development then took its case to the High Court.

The court heard that the home owners had agreed to the collective sale as their units would fetch a higher price than if they had sold their properties individually.

When UOL Development was told that its offer of $61m had been accepted, it asked the lawyers representing the home owners, Wee Ramayah & Partners, for 53 separate letters of acceptance.

UOL Development then presented the 53 contracts - one for each unit - for stamping. Based on this, it said the stamp duty payable should be assessed on a per unit basis instead of collectively.

But Mr Liu Hern Kuan, who represented the Commissioner of Stamp Duties, pointed out that UOL Development's affiliated companies had previously acquired properties on an en bloc basis.

The properties include Eng Cheong Towers, Maryland Park and Bo Bo Tan Gardens and these affiliated companies had paid stamp duty based on the en bloc price.

On Monday, Justice Tan Lee Meng ruled that UOL Development had to pay stamp duty based on the en bloc price, and not on a per unit basis.

He pointed out that in the tender, the home owners had indicated that they wanted to sell their properties as a collective entity.

And when UOL Development made an offer to purchase, it had also not indicated that it was buying the 53 units separately.

He also said that UOL Development's move to ask for 53 separate contracts was for the sole purpose of lowering the stamp duty payable.

'The plan for 53 separate contracts had no sound commercial basis and was so contrived that it was clearly intended to reduce or avoid tax liabilities,' said Justice Tan.
Posted by Richard Yeo at 10:37 AM No comments: 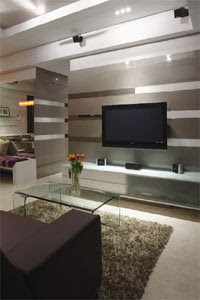 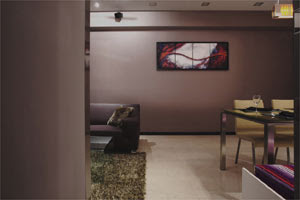 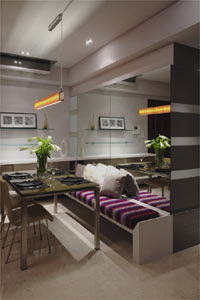 由于是顶楼公寓，楼上有舒适的天台，装有水力按摩池。为充分利用天台的好环境，设计师布置了休闲桌椅，以一面流水潺潺的水帘墙，将天台装修成休闲去处，成为屋主一家闲来流连的好地方。
Posted by Richard Yeo at 10:25 AM No comments:

仲量联行(JLL)的区域董事及投资部主管吕醒发说：“新加坡土地有限，尤其是地理位置优越的地点，如果现在不标下的话，以后就没有机会了。何况，在房地产价格持续攀升的势头下，新项目价格增长将能弥补费用和成本的增加。”
Posted by Richard Yeo at 10:17 AM No comments:

“比如亚历山大路991号前校舍，RichZone所开出的每平方公尺14.21元标价，相等于每平方英尺1.32元，即使加上装修费用，回报还是相当可观。装修后，公司可向租户收取每平方英尺4.50元左右租金。”
Posted by Richard Yeo at 10:14 AM No comments:

Indian International School To Open In January At Balestier

The announcement was made at the fifth anniversary celebration of the foundation.

One of the campuses will open in January in the Balestier area. There will be a primary and secondary school.

The other campuses are in Japan and Vietnam.

A four-hour performance was put on specially to mark the occasion by thousands of students from countries like Thailand and Malaysia.

"You compliment the range of educational options and opportunities available in Singapore from both public and private institutions and I believe it also strengthens the presence of quality institutions in Singapore," said Mr Jayakumar. - CNA /ls
Posted by Richard Yeo at 10:04 AM No comments: