The 93 per cent drop was on the back of a less painful 27 per cent fall in revenue to $104 million for the three months to Mar 31.

Although GuocoLand did not give details about the earnings fall, analysts said that a fair amount of profit had already been recognised for earlier projects while some developments have yet to be launched.

There is still plenty happening on all fronts. In Singapore, it has launched three developments - Le Crescendo, The View@Meyer and The Quartz.

GuocoLand said sales of about 90 per cent have been achieved at the first two projects. It has also launched the remaining units of The Quartz with about 57 per cent sold.

Its residential apartments at West End Point in Beijing are almost fully sold.

The firm had earlier bought a company - Beijing Cheng Jian Dong Hua Real Estate Development - which is undertaking the Dongzhimen project in Beijing.

This project is linked to several disputes centring on loans from various parties. Legal action has been launched in some cases.

GuocoLand also faces legal tussles, with the Hainan Trade Bureau claiming that ownership of a company, now under GuocoLand, should revert to its original owners.

Things seem more settled in Malaysia, where GuocoLand is planning to launch the Oval Apartments, a development in Kuala Lumpur City Centre.

In Vietnam, the company is finalising the sale of the Phase 1 units of the residential part of The Canary, a development next to Vietnam Singapore Industrial Park, north of Ho Chi Minh City.

The shares ended unchanged at $3.55 yesterday.
Posted by Richard Yeo at 1:34 PM No comments:

Broadcasting and radio communications firm Rohde & Schwarz has said Asia will be the source of technological innovations in the future, and that is why it has set up its first regional headquarters outside Germany in Singapore.

Research and development (R&D) will be the focus of Rohde & Schwarz's new regional headquarters in Changi Business Park. The communications firm said this is its largest investment outside of Germany.

Erich Freund, Managing Director, Asia Pacific, Rohde & Schwarz, said: "There are more and more standards coming up from Asia. I think by the power of the economy, China is at the forefront - you see a lot of Chinese standards for broadcasting, in mobile radio...

"WiMax is very much driven by some Asian countries like Korea and Taiwan. We definitely will see a lot of new innovations coming from this region, and I think Singapore will have a strong standing in that."

Currently more than 30 percent of the company's turnover comes from Asia.

Rohde & Schwarz is looking to double its R&D staff in Singapore, now standing at 150. Local engineers they recruit will also have the chance to work in the firm's Munich operations.

Lim Boon Huat, Managing Director, Singapore, Rohde & Schwarz, said: "The people we are going to hire will be for new skill sets as well (as) new domain areas, and that will be exciting for Singapore, because it gives our people a chance to develop high-end technology.

"Rohde & Schwarz is a technology company and I see... the synergy between Germany and Singapore... and this is where a lot of things can flow, ideas can flow between both sides."

The company is offering two full scholarships to engineering students at the National University of Singapore and Nanyang Technological University to study at the Technical University of Munich next year. - CNA/ms
Posted by Richard Yeo at 12:14 PM No comments:

The industrial trust said organic growth and investments will continue to be the main income drivers for this year.

"And for logistics, probably we will see it being relatively subdued." The trust said this is because of more supply coming up within the next two years.

The REIT also plans to go regional in the next two years.

The University of Adelaide plans to make its campus in Singapore its second largest within two years. By 2010, its student numbers will be doubled.

The University made this announcement at a dinner on Friday. The event was held to celebrate the 10th anniversary of its educational partnership with Ngee Ann Kongsi. 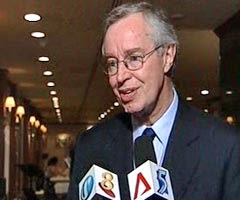 Professor John Taplin, Pro Vice-Chancellor, University of Adelaide, said: "The University has been involved in Singapore for 10 years. We have this partnership that has been operating successfully over the decade. And we think we're now ready to expand our programmes and our student numbers.

"We are based in Adelaide. We couldn't deliver the programmes in Singapore without having a partner here in Singapore that we could work with. Other Australian universities would also, I think, need a partner.

"Perhaps that's one of the lessons to be learnt from the UNSW (University of New South Wales) Asia experiment. There was no local partner and so perhaps they didn't identify some of the risks that are involved in setting up (a campus here)."

The newly-named University of Adelaide Ngee Ann is introducing new post-graduate programmes and research collaborations with Singapore. It aims to make its campus here a regional centre of excellence.

The University expects student numbers to jump from 456 to 900 by the end of next year. And it will recruit students from Singapore and other countries in the region.

Singapore is now the University's third largest source of overseas students. Most of them study in Singapore and this number is expected to increase substantially in the next decade.

Meanwhile, former Deputy Prime Minister Dr Tony Tan, who is the Chairman of Singapore's National Research Foundation, and an alumnus, launched the Singapore Adelaide Alumni Fund at the dinner.

The money will go to undergraduates who need financial assistance. Those eligible are Singapore citizens or permanent residents who are studying full-time at the University of Adelaide.

The Ngee Ann Kongsi has agreed to match every dollar contributed, up to S$250,000.

Australia is the top destination for Singapore students heading overseas for their higher education. Australia attracts 55 percent of Singaporeans studying overseas, compared to 19 percent in the US, and 18 percent in the UK. - CNA/ms
Posted by Richard Yeo at 12:06 PM No comments:

WHEN the Land Titles (Strata) Act was amended, the majority required to approve a collective property sale was changed from 100 per cent to 80 per cent on the following basis:

# A small minority (as we understand it) in places like Kim Lim Mansion blocked sales from going through;

# The change to the law was meant to facilitate redevelopment in very run-down condos; and

# The law was meant to allow intensification of land use in prime areas.


These original intentions have changed radically in that:

# Now more than 20 per cent have to oppose the sale process in order to save their homes;

# Condos in good condition have too often gone under the en-bloc hammer; and

# Condos in non-prime areas are going en bloc, and not always with the intensification previously envisaged.

Since thousands of homes have gone en bloc and there is now talk of collective sales in too many condominiums, can the Government consider raising the ratio to 99 per cent consent?

With the proliferation of resistance to collective sales in condos in Botanic Gardens, Bayshore Park, Clementi Park, Green Lodge, Dairy Farm Estate, Mandarin Gardens and more, each with its own website, there is obviously a growing sentiment in favour of staying put.

统计局此前公布数据显示，2月份全国70个大中城市房屋销售价格同比上涨为10.9。
Posted by Richard Yeo at 9:46 AM No comments:

Sharp drop due to lower contribution from projects in Singapore, China

GUOCOLAND Ltd yesterday reported a 93 per cent plunge in third-quarter net profit to $2.6 million for the quarter ended March 31, down from $34.4 million a year ago.

Guocoland said that this was mainly due to a drop in gross profit to $11 million from $45.9 million, due to lower profit contribution from property development projects in Singapore and China.

In its filing with the stock exchange yesterday, Guocoland said that it incurred an income tax expense of $6.9 million for the quarter, mainly due to an underprovision of $4.6 million for a completed and fully sold project in China arising from non-deductibility of certain expenses.

Guocoland also explained that in November 2007, it completed its acquisition of a 100 per cent interest in Hainan Jing Hao Asset Limited, which in turn held a 90 per cent stake in Beijing Cheng Jian Dong Hua Real Estate Development Company Ltd, the company undertaking the Dongzhimen project in Beijing (DZM Project).

To date, an aggregate of 3.22 billion yuan (S$650 million) of the purchase price of 5.8 billion yuan has been paid to the vendors of the DZM Project, Beijing Beida Jade Bird Company Ltd and its related corporations.

The balance has been withheld pending resolution of disputes, said Guocoland, which has projects in Singapore, China, Malaysia and Vietnam.

The company said that contraction in global economies, especially in the US, volatility in the global financial markets and rising global inflation would slow down the economies of Singapore and other Asian countries.

'The group has built up a solid base which will enable it to realise good growth and earnings from its landbank. Barring unforeseen circumstances, the group's results for the fourth quarter (ended June 30, 2008) will be substantially better than the third quarter (ended March 31, 2008).

Inventory has increased to $3.8 billion from $1.6 billion, mainly due to a jump in Guocoland's landbank arising from completion of the en bloc acquisitions of Sophia Court, Palm Beach Garden, Leedon Heights and Toho Garden condominiums in Singapore and the acquisition of the Dongzhimen site in Beijing.

Earnings per share for the quarter, fully diluted, came to 0.31 of a cent, compared with 5.55 cents a year ago.

At the close of the trading day, Guocoland shares ended unchanged at $3.55 apiece.
Posted by Richard Yeo at 9:42 AM No comments: