It says its 6.2% stake is long-term investment, not trading position.

OCBC Bank has rejected the respective takeover bids for The Straits Trading Company (STC) by the Lee family’s Knowledge Two Investment and the Tan family’s The Cairns. 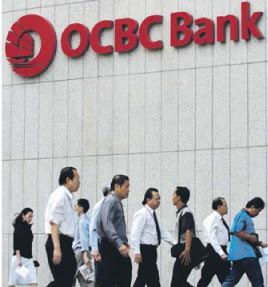 ‘The 6.2 per cent stake in STC held by OCBC represents a long-term investment, not a trading position, notwithstanding that it is classified, for accounting purposes, as ‘available for sale’,’ it said yesterday in its first response to the takeover battle for STC.

Knowledge Two raised its offer on Thursday to $6.55 per STC share, in response to The Cairns’s renewed offer of $6.50 per share on Jan 28. It had similarly pipped its rival’s initial offer of $5.70 early last month with a bid of $5.76.

Quipped a Lee insider, don’t forget ‘OCBC stands for only can borrow coins’.

The Cairns is a privately held investment firm controlled by family members of the late Tan Chin Tuan who was chairman and managing director of OCBC for two decades. Mr Tan had been a faithful employee of the Lee family who founded OCBC and he had been instrumental in acquiring a stable of companies and properties for them.

OCBC said that it has held the STC shares as a long-term investment for many years, and the investment has yielded attractive returns. Over the three-year period ended Dec 31, 2007, STC shares achieved a ‘total shareholders’ return’ (income from dividends plus capital gains) of about 40.7 per cent per annum, it said.

The bank noted that it had not sold any STC shares for many years, other than about 27 million shares in 2006 to comply with regulatory requirements.

It also pointed out that the combined stake of 33.4 per cent held by OCBC group, Great Eastern Holdings group and the Lee group of companies represents the single largest block of shares in STC.

‘If the three substantial shareholders all wish to realise their investments, such a sizeable single largest block could command a significant control premium from strategic buyers.’

Besides control premium, OCBC also sees the potential for the three to ‘exercise their influence’ on STC directors to continue or accelerate the unlocking of value for the benefit of all STC shareholders.

‘The financials of the STC group suggest that there exists significant room for leverage and accordingly some values to be unlocked from a more efficient capital structure.’

OCBC intends to seek board representation on STC and request that a financial adviser be appointed, after the close of offer, to recommend ways to unlock and enhance shareholders’ value.

OCBC noted that Knowledge Two has indicated that it would take similar steps to further unlock value in STC for the benefit of shareholders. ‘Knowledge Two’s intended efforts are aligned with those of OCBC.’

The bank closed its statement yesterday by saying that should there be any further development, it would further evaluate and decide accordingly.
Posted by Richard Yeo at 11:40 AM No comments:

THE property market has quietened considerably this year, but prices have yet to fall.

Nevertheless, if you have a modest budget of about $600,000 for a home, your choices are not just confined to HDB flats. 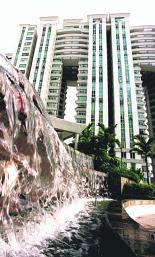 THE IMPROVED PROPERTY MARKET has lifted the prices of apartments at Maysprings in Bukit Panjang. Most units are now going for $650,000 and below, compared with $500,000 and less a year ago. -- ST FILE PHOTO

Some fairly new executive condominiums as well as older private condos or apartments are within reach, if you look hard enough.

These are typically 99-year leasehold properties in suburban locations such as Woodlands, Choa Chu Kang and Jurong.

Some city-fringe locations such as Geylang, where the red-light district is nestled, or small apartments in places such as Upper East Coast Road, may also offer some bargains. Landed homes, however, will require a bigger budget. So will new condo launches, unless you do not mind tiny studio apartments.

BUYERS tend to prefer buying new properties directly from developers, rather than old ones. They are drawn by the slick marketing promotions put out by developers and pay a premium for their new homes. But new properties may not be worth buying when you have a tight budget.

'In 2006, all the record prices were achieved by new launches,' said Knight Frank's director of research and consultancy, Mr Nicholas Mak.

'Units at Ardmore Park, an older development which is in a very good location and is well-maintained, were transacted at much lower prices than those in new high-end condos in not-so-good locations.'

It is the same in suburban locations, as buyers pay more for what is new, he said.

The 17-year-old, 616-unit Orchid Park Condominium in Yishun, which faces Lower Seletar Reservoir, also had some units that went for around $600,000.

Studio apartments, which can range from around 500 sq ft to 600 sq ft, can be bought for $600,000 or less. The only problem is that there are not many of them in suburban projects, Mr Mak pointed out.

NOW that HDB prices have risen and there is overwhelming demand for new HDB flats, buyers may do well to consider private homes if they can afford them.

'There will be growing demand for mass market properties as Singapore continues to create jobs,' said Savills Singapore's director of business development and marketing, Mr Ku Swee Yong. The opening of the two integrated resorts alone will create a significant number of entry-level jobs, he said.

'Our unemployment rate is at a 10-year low, which means that we will need foreigners for some of these jobs,' he said.

'As long as rental values remain strong, capital values should also trend up.'

For those buyers who may one day want to rent out their homes, a private property could be a better choice than an HDB flat.

First of all, not everybody can buy an HDB flat. Also, there are leasing restrictions.

Yields may be higher for some HDB flats than private homes, but a private condo unit may be easier to rent out as condos usually come with amenities and security, property consultants said.

On average, net rental yields for private homes across Singapore are at 3.6 per cent, said Mr Mak.

Government data shows that the median rental rate in the fourth quarter of last year for Maysprings was $2.38 per sq ft a month. For a 904 sq ft unit at Maysprings, the rent would work out to $2,151 a month, or a 5.2 per cent gross yield.

The median rate was $2.09 psf for Orchid Park Condominium and $2.98 psf for West Bay Condominium.

Whether you are buying a property to live in or to rent out, know that you have a fair number of choices even if your budget is only $600,000.
Posted by Richard Yeo at 11:34 AM No comments:

9 In 10 Find S'pore An Expensive Place To Live In

HOUSEWIFE Goh Lay Leng has seen her monthly grocery bills go up by 10 per cent, and that has prompted the mother of four to look for cheaper alternatives.

'Everything is increasing and we're spending more. My husband says there's hardly any money left at the end of the month,' said Madam Goh, 44.

Her engineer husband brings home about $5,000 a month and the family lives in a four-room flat in Pasir Ris.

A total of 91 per cent of the 353 respondents in a Sunday Times survey agreed with Madam Goh, saying that Singapore had become an expensive place to live in.

The survey had been conducted in late December to understand Singaporeans' attitude to money.

Nine in 10 also felt that Singapore was an expensive place to raise a family. Less than half were confident that their living standard would improve in the next two years.

They blamed the higher cost of housing, transport and basic necessities such as food, water and power.

Almost half said that they felt the financial strain of servicing mortgages or rents, although 36 per cent were contented.

The latest figures from the Department of Statistics show that the average household's income went up by 9.6 per cent last year, the biggest increase in at least a decade.

It rose to $6,280, up from $5,730 the year before. Families with higher incomes also had bigger pay hikes than those in lower-income households, widening the rich-poor gap.

Prime Minister Lee Hsien Loong said recently that he expected inflation this year to be 5 per cent or more. It was about 2 per cent last year.

MP Halimah Yacob said that the public's mood may have been dampened by the continuing prospect of high inflation. But she was also heartened that Singaporeans were practical and prudent.

'They think of investing in their children's education and old age and that reflects that they do recognise the need to plan for the long term,' she said.

Take 41-year-old Madam Zaina Mohammad. The part-time cashier and her Cisco officer husband's combined monthly income is just $2,000, but the couple make sure they deposit $50 every month into each of their three children's bank accounts for their education fund.

Like her, the priority for most Singaporeans is their children's future. If they had a million dollars, 27 per cent said that they would spend most of the money on education.

One possible indication as to why their children's education reigned supreme: More than half of those surveyed said that they were either not sure, or did not think that their children would be able to improve upon or afford their present lifestyle as adults.

Another indication of Singaporeans' prudent and practical traits: More than four in five chose to save their surplus income every month.

Despite rising prices, nearly all the people polled had no plans to pack up for greener pastures.

Ninety per cent agreed that Singapore was still a place worth living in. Also, two in five were glad that Singapore had become one of the richest countries in the world, because it meant better public amenities, a more cosmopolitan society and a vibrant nightlife and cultural scene.

Despite having to scrimp and save, Madam Zaina isn't going anywhere. 'It's peaceful here and it is our home after all,' she said.
Posted by Richard Yeo at 11:31 AM No comments: