THE Urban Redevelopment Authority (URA) is reviewing the activities allowable in restaurants, food shops and pubs located in private shophouses.

One of the considerations is to allow more flexibility in providing live entertainment on the premises of restaurants and pubs.

Currently, live music and performances are not allowed in restaurants at private shophouses near residential estates.

URA has allowed pubs to operate along some main roads on the fringe of residential estates, but live entertainment is not allowed either.

As such, any restaurant, bar or pub that wants to provide live entertainment will need to apply to URA for a 'change-of-use'. For instance, a pub might need to be designated a 'nightclub' instead, as the guidelines for nightclubs do allow for the sale of alcoholic drinks with singing, dancing or live entertainment.

And the operator will still need to comply with licensing controls of various agencies such as the National Environmental Agency, the Police Entertainment Licensing Unit (PELU) and even the Land Transport Authority, depending on the traffic conditions. However, the process of applying for these licences is not as odious as it may sound.

An operator of a bar close to a residential neighbourhood who did not want to be named said that he had applied for and received a licence for live entertainment from PELU quite quickly. However, he was not aware that he also had to apply to URA for a 'change-of-use'.

Indeed, URA reveals that for the last three years, it has approved five applications for 'change-of-use' from restaurant to nightclub and one application from pub to nightclub.

A restaurant operator that provides occasional live entertainment (who also did not want to be named) revealed that after checking with PELU, it found that it was exempt for having to apply for a licence at all.

According to the Public Entertainment and Meetings Act, it does appear that PELU exempts certain performances from requiring licences if, for instance, these end before 10.30pm and the event is not held at the same place for more than three consecutive days within a month.

More flexibility will favour the business community. However, as the operators that BT spoke with have found, the neighbourhood residents are not always happy.
Posted by Richard Yeo at 8:07 PM No comments:

CAPITALAND is divesting its 30 per cent stake in a company that owns Menara Citibank, a 50-storey office tower in Kuala Lumpur's Jalan Ampang, for RM176 million (S$75.5 million). Upon completing the divestment, the Singapore-based property giant will recognise a gain of about S$22.1 million. 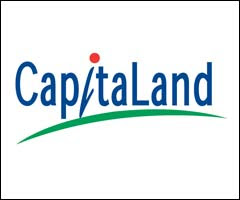 The company being divested is Inverfin Sdn Bhd, whose principal asset is Menara Citibank. CapitaLand and the other Inverfin shareholders - Citibank (50 per cent) and Lion Group (20 per cent) - are selling their respective shareholdings in Inverfin to IOI Corporation Bhd.

The total consideration for the divestment is RM586.7 million and based on the net asset value of Inverfin which values the property at about RM733.6 million, this works out to about RM1,000 per square foot of net lettable area for the freehold property.

CapitaLand Commercial Ltd CEO Wen Khai Meng said the group will recycle or redeploy proceeds from the divestment to tap on new opportunities in the growing Malaysian market.

Riding on this positive backdrop, CapitaLand has continued to expand its investments in Malaysia through Quill Capita Trust (QCT), which owns nine properties in Cyberjaya and Klang Valley. In addition, CapitaLand manages the US$30 million Mezzo Capital Fund, which has invested in five residential projects in Kuala Lumpur, and the US$270 million Malaysia Commercial Development Fund (MCDF).

MCDF holds stakes in two sites in Kuala Lumpur Sentral to build offices and serviced apartments with retail amenities, and has other projects located in quality residential and commercial precincts including Mont' Kiara and the Kuala Lumpur City Centre area.

Despite weaker property sentiment, the government has opted to leave development charge (DC) rates largely unchanged, except for an average 6.3 per cent cut for non-landed residential use.

There may not be sufficient evidence of declines in property values yet, market watchers said, but the rates could be cut at the next revision if stronger evidence emerges to show values are falling. 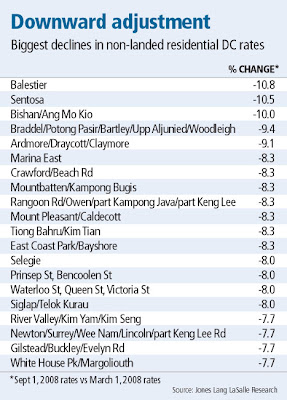 DC rates, which may be payable for enhancing the use of some sites, are revised twice yearly, on March 1 and Sept 1, by the Ministry of National Development in consultation with the Chief Valuer.

Jones Lang LaSalle's analysis shows that a site redesignated from one sector to another in the Jurong Lakeside area could see increases in DC rates of 35 per cent for landed residential use, 39 per cent for hotel use and 38 per cent for industrial use based on Sept 1, 2008 rates.

As for the minimal changes in DC rates for most use groups, CB Richard Ellis executive director Li Hiaw Ho said this was in line with the slow pace of public and private land transactions seen this year.

Knight Frank managing director Tan Tiong Cheng said: 'For the commercial (office, retail) sector, we do not have direct evidence to show land values have dropped. For residential, the collective sales market has quietened but there has been evidence at recent state land tenders to show a decline in land values.'

That could account for the chops in DC rates for non-landed residential use.

DC rates for non-landed residential use were trimmed in 116 of the 118 locations. The cuts ranged from 3.8 per cent (in the Pasir Ris/Loyang and Punggol areas) to 10.8 per cent in the Balestier area. Recent transacted prices for non-landed projects like The Marque, Vutton and Pavilion 11 might have been the reason for the DC cut. The rate for Sentosa was trimmed 10.5 per cent, perhaps based on prices achieved recently at condos like Marina Collection and Turquoise at Sentosa Cove.

Two adjacent geographical sectors covering Ang Mo Kio/Bishan and Braddell/Potong Pasir, saw respective cuts of 10 per cent and 9.4 per cent. The cuts could be due to a 99-year condo site at Lorong 2/3 Toa Payoh near Braddell MRT Station being sold in April at 23 per cent below the price paid for a condo site next to Ang Mo Kio Hub in September last year.

DC rates for landed residential, commercial and hotel uses were completely untouched across the 118 geographical sectors. For industrial use, the rate was increased 11.1 per cent in the Paya Lebar/Eunos area but unchanged in the other 117 locations.

CBRE's Mr Li said the latest DC rate revisions were 'pretty much an academic exercise as there aren't many en bloc sales or redevelopments of sites going on which would involve DC payments'.

'Nobody is getting excited; there's little practical effect.'
Posted by Richard Yeo at 7:54 PM No comments:

ANOTHER sign that the values of land and private homes are sliding arrived yesterday in the form of the new property development charges.

These charges, which reflect changes in land and property values over the last six months, were lowered for residential apartments and condominium units for the first time in five years. 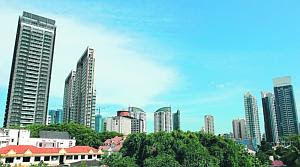 Aside from prime locations, city fringe areas similar to this one off Newton Road are always development rates have dropped the most. -- ST FILE PHOTO

Property consultants were not surprised. They had expected fees in this sector to stay stable or dip slightly, given that the only residential plots sold in the past six months were state-owned parcels that transacted at fairly low prices.

No area was spared, with rates for non-landed residential homes falling across the board by an average of 6 per cent islandwide. 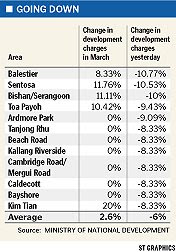 The move was the ‘first signal from official sources that some values in the property market are falling’, said Mr Nicholas Mak, director of research and consultancy at Knight Frank.

The Government levies development charges on developers who want to build a new, bigger development on an existing site they have bought.

The fees are categorised by sector and location. They are revised every six months by the chief valuer, based on transactions of land and property in the past half-year.

Lower charges imply that recent land and property deals have been transacted at lower prices, and also mean that it will be cheaper for developers to buy and redevelop a collective-sale site, for instance.

But property consultants do not expect the new lower charges to revive the deathly quiet collective-sale market.

‘The rise in construction costs is higher than the fall in development charges. So total development cost would still increase,’ said Mr Mak.

Developers may also hold out for further decreases in development charges in the next revision in March, he added.

‘All we need is another quarter of weak sentiment and chances are, six months from now, there could be more downward revision in the charges.’

‘In the next 12 to 18 months, development charges might move downwards moderately to reflect a scenario of realistic consolidation after the run-up in land prices in the past two years,’ he said.

This time around, the falls in fees for non-landed residential land ranged from 3.85 per cent to 10.77 per cent, depending on location.

Areas where rates dropped most included prime locations such as Ardmore Park and Sentosa, city fringe districts like Balestier, Keng Lee and Kallang, and suburban regions such as Bayshore and Bishan.

Apart from non-landed residential land, development charges barely budged in other sectors, reflecting the lack of activity and flat prices in the broader property market.

The fees for land to be used for offices, shops, landed homes, hospitals or hotels remained unchanged across all locations in Singapore.

For industrial land, charges rose only in the Ubi and Kaki Bukit area. They went up 11.1 per cent, possibly due to the recent sale of an industrial site in Ubi Avenue 4/Ubi Road 2 in April, suggested CBRE’s Mr Li.
Posted by Richard Yeo at 7:14 PM No comments:

LONDON - BRITAIN's economic downturn is likely to be deeper and last longer than expected and could be the worst for 60 years, finance minister Alistair Darling said on Saturday.

In a candid interview with the Guardian newspaper, the Chancellor of the Exchequer said the government had failed to get its message across and would battle to persuade a sceptical electorate it deserved another term in power.

The paper's website quoted him as saying economic times for the country were 'arguably the worst they've been in 60 years'.

He added: 'I think it's going to be more profound and long-lasting than people thought.' Economic conditions presented the ruling Labour Party with its toughest challenge since the 1980s, he said.

'We've got our work cut out. This coming 12 months will be the most difficult 12 months the Labour Party has had in a generation, quite frankly.' Two days earlier, Bank of England policymaker David Blanchflower told sources that two million Britons could be out of work by Christmas.

Britain's economy failed to grow in the second quarter of the year for the first time since the early 1990s and many economists believed it had already tipped into recession.

Mr Darling's comments suggested growing unease in the highest ranks of the government that the downturn would make it difficult for Prime Minister Gordon Brown to recover popularity and fend off a resurgent opposition Conservative Party.

'We've got to rediscover the zeal which won three elections, and that is a huge problem for us at the moment,' Mr Darling was quoted as saying. 'People are pissed off with us.'

The BBC called Mr Darling's interview an 'astonishing intervention' and commentators are likely to question the wisdom of his comments on the economy before a planned relaunch by the government.

Mr Brown is expected to unveil a package of measures next week to support the economy and the housing market in what he hopes will be the start of a sustained campaign to regain the political initiative. -- REUTERS
Posted by Richard Yeo at 7:11 PM No comments: