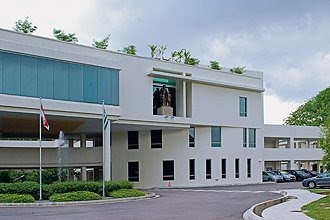 St Joseph's Institution (International) has about 40 expatriate children on the waiting list for its primary section, which has filled all its 320 places for the new academic year beginning in August.-- PHOTO: SJI

In fact, St Joseph's Institution (International) now has about 40 expatriate children on the waiting list for its primary section, which has filled all its 320 places for the new academic year beginning in August, said principal Andrew Bennett at the school's official opening on Friday.

The success of SJI (International) mirrors that of the two other similar schools here - ACS International and Hwa Chong International, both of which opened in 2005 and have seen enrolment grow five or six times since then.

On Friday, the chairman of the SJI (International) board, Mr Lawrence Da Silva, retraced the school's successful arc since it first began accepting students in 2007.

Its pioneer batch had just 112 students, and this has grown to 725, all of whom are enrolled in the school's 12-year programme, which leads up to the International Baccalaureate.

Demand is so strong that the school, in Thomson Road, expects enrolment to grow to 1,000 by next January.

In his speech at the event on Friday, guest-of-honour Dr Tony Tan, a patron of the SJI International Leadership Council, a group of old boys who raised funds and helped set up the school, pointed to one factor in its success.

Dr Tan, an old boy of SJI himself, said the school's Lasallian mission provides for a unique learning environment.

This mission aims to provide students with the skills and knowledge to lead productive lives, while inculcating sound moral values wthin the context of Singapore's multi-racial, multi-religious, multi-cultural society.

Read the full story in Saturday's edition of The Straits Times.
Posted by Richard Yeo at 11:50 PM No comments:

Round The Circle Line

CIRCLE Line trains will start rolling in two weeks, with the first five stations set to open their doors on May 28. 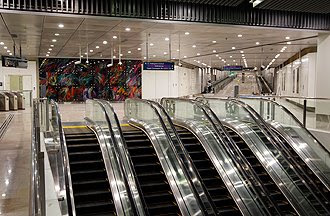 Escalators leading up from the Circle Line platform to take commuters to the North-East Line at Serangoon interchange. -- ST PHOTOS: TERENCE TAN

The estimated 55,000 commuters who will use the service daily can expect trains to run at a frequency of one every three minutes to four minutes during peak hours.

Besides serving residents and several nearby schools in areas such as Marymount and Lorong Chuan, the stations will also showcase works by local artists.

For now, seven three-car trains will ply the 5.7km stretch during rush hour.

More trains will come on board when the remaining 24 stations in the Circle Line open to the public from next year onwards.

On Thursday, The Straits Times took an eight-minute train ride from Bartley to Marymount and checked out each of the five stations.
Posted by Richard Yeo at 11:49 PM No comments: 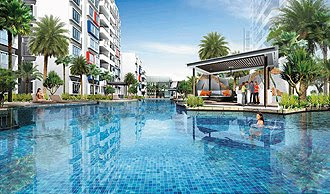 Buyers picked up 115 units of Mi Casa at a median price of $639 per square foot. -- PHOTO: FAR EAST ORGANISATION

They launched 1,083 units in the same month, up from 832 units in March, according to the latest monthly data released by the Urban Redevelopment Authority.

THE troubled $548 million Gillman Heights enbloc sale was due for closure on Friday, but a last minute hitch has stalled the deal.

The sale, which has dragged on for two controversy-racked years, was supposed to have been signed off by last night but the owners' lawyers told The Straits Times that the buyers did not complete the deal.

The buyers - a group called Ankerite and led by property giant CapitaLand - raised some issues out of the blue on April 30 relating to routine funds held by the condo's management.

Read the full report in Saturday's edition of The Straits Times.
Posted by Richard Yeo at 11:45 PM No comments: