THE Housing and Development Board yesterday awarded a Design, Build and Sell Scheme (DBSS) site at Lorong 1A Toa Payoh to a Hoi Hup Realty-led consortium that emerged as the top bidder when the tender for the site closed on Tuesday.

The winning bid of about $198.82 million works out to about $160 per sq ft per plot ratio - the highest of three bids for the 103-year leasehold plot.

A Hoi Hup spokeswoman said yesterday the group plans to build about 1,200 HDB flats on the site, of which about a third will be three and four-room flats and the rest five-room flats. 'We're looking at launching the project in early second-quarter 2009,' she said.

The average selling price is expected to be around $500 psf and will depend on whether Hoi Hup succeeds in securing exemption of bay windows and planter boxes from gross floor area calculations.

This will hinge on whether Hoi Hup can submit its formal application for the project to the Urban Redevelopment Authority in time to secure provisional permission before Oct 7.

After that date, bay windows and planter boxes will no longer be exempt from GFA calculations.

'We're looking at building a total of five blocks, of which two will be 46 storeys high and with a sky terrace on one of the upper levels (above the 20th floor). The remaining blocks will be 40 storeys high,' the spokeswoman said.

'We have to complete the entire project within four years.'

A Hoi Hup-Sunway consortium is also developing another DBSS flat project, called City View @ Boon Keng. This was launched earlier this year at an average price of $520 psf.

PROPERTY developer GuocoLand's earnings for the full year ended June 30 fell 43 per cent as it saw lower sales from its property development projects in Singapore and a one-third fall in other income.

The bottom line was also hit by a $63.9 million or 33 per cent fall in other income to $130.8 million. This came as interest income and net foreign exchange gains were more than wiped out by lower revaluation gain from investment properties and lower investment property provision writeback.

The group was also hit by higher income tax, mainly from its property development projects in China.

Finance costs also rose 22 per cent to $39.4 million due to higher bank borrowings and interest rates.

GuocoLand - which has operations in Singapore, China, Malaysia and Vietnam - did not provide separate numbers for its fourth quarter.

The group acknowledged that the property markets in the countries where it operates are slowing down as developers and buyers adopt a more cautious stance. But in the medium term, it expects these countries' economies to remain resilient and grow.

'Coupled with the implementation of regulatory measures and macro-economic policies to control inflation and prevent overheating of the economy and property markets, the attraction of Asia as a growth region should have positive effects on the demand for quality housing in these countries,' GuocoLand said in a filing to the Singapore Exchange.

For Singapore, the cautious sentiment in the property market is evidenced by a slowdown and delay in property launches and a lower take-up rate compared to 2007, GuocoLand noted. But the ongoing development and subsequent completion of the two integrated resorts and the Marina Bay Financial Centre should help economic growth in the next few years, the developer added.

GuocoLand also said that it has increased its inventories from $1.6 billion to $4.5 billion over the past year, mainly due to an increase in its land bank. Among other purchases, the company completed its en bloc acquisitions of Sophia Court, Palm Beach Garden, Leedon Heights and Toho Garden condominiums in Singapore.

GuocoLand shares lost six cents to close at a 52-week low of $2.06 yesterday. The stock has shed 63.5 per cent so far this year.
Posted by Richard Yeo at 5:55 AM No comments:

PROPERTY giant CapitaLand said yesterday that it will realise a total portfolio gain of $313 million from injecting four Raffles City assets in China as seed assets into its 50 per cent owned Raffles City China Fund. 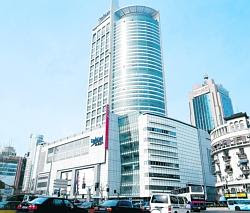 Shanghai skyscraper: The gain will comprise a $183 million net gain from the dilution of CapitaLand's interest in the four Raffles City assets as well as $130 million fair value gain for Raffles City Shanghai

The gain will comprise a $183 million net gain from the dilution of CapitaLand's interest in the four Raffles City assets as well as $130 million fair value gain for Raffles City Shanghai.

The US$1 billion (about S$1.4 billion) real estate private equity fund - the group's largest to date - will buy CapitaLand's effective 55.9 per cent stake in Raffles City Shanghai, and 100 per cent of the Raffles City projects under development in Beijing, Chengdu and Hangzhou.

The property group is expected to receive a total consideration of about US$841 million (about S$1.15 billion) which takes into account the agreed value of Raffles City Shanghai at 4.51 billion yuan (S$889 million) and the agreed land values of the other three Raffles City projects.

Net of its 50 per cent stake in the fund, CapitaLand will obtain an eventual net cash flow of about US$420 milllion (S$574 million).

Besides originating and retaining a sponsor stake in the fund, CapitaLand is also managing the fund and its properties.

'CapitaLand, through its 50 per cent stake in the fund, will continue to enjoy sustained rental income as well as appreciation in capital value of the prime assets,' the group said in a release yesterday evening.

CapitaLand Group president and CEO Liew Mun Leong said that the total transaction proceeds of $1.15 billion will strengthen the group's balance sheet and boost its ability to seize new opportunities in China.

On the stockmarket yesterday, CapitaLand ended three cents lower at $4.45. Morgan Stanley last week downgraded the stock to Underweight from Equal-Weight and revised downwards its price target for the share to $4.16 (from $5.94), pegged at a 15 per cent discount to its end-2009 estimated net asset value per share of $4.89 (from a $5.94 estimated NAV per share for end-2008 previously).
Posted by Richard Yeo at 5:51 AM No comments:

(WASHINGTON) US Federal Reserve chairman Ben Bernanke said yesterday the financial storm that began last year 'has not yet subsided', creating 'one of the most challenging' economic environments in memory. 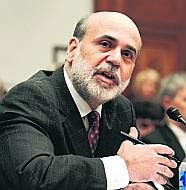 Mr Bernanke: A commodity-fuelled surge in inflation is complicating the efforts to prop up the economy

The mix has created 'one of the most challenging economic and policy environments in memory', Mr Bernanke said, according to a text of his remarks released by the central bank.

Mr Bernanke said the Fed has been working on three fronts in an effort to maintain economic stability - keeping interest rates low to prevent a collapse of economic activity, offering extra liquidity to banks and brokerages facing a credit squeeze, and revamping the regulatory structure to prevent a recurrence of the housing boom-bust cycle.

'By cushioning the first- round economic impact of the financial stress, we hoped also to minimise the risks of a so-called adverse feedback loop in which economic weakness exacerbates financial stress, which, in turn, further damages economic prospects,' he said.

Yet Mr Bernanke said the efforts to prop up the economy are complicated by a commodity-fuelled surge in inflation.

But he said the Fed's strategy 'has been conditioned on our expectation that the prices of oil and other commodities would ultimately stabilise, in part as the result of slowing global growth'.

He said the Fed's extraordinary efforts to pump liquidity into the financial system were 'intended to mitigate what have been, at times, very severe strains in short-term funding markets and, by providing an additional source of financing, to allow banks and other financial institutions to deleverage in a more orderly manner'.

This means moving beyond the banking system that is closely regulated by the Fed and having tighter rules for investment firms and brokerages that allows regulators to potentially step in and take control in a manner similar to that of a failed bank.

He said the rescue of Bear Stearns, in which the Fed and Treasury helped the failing firm's buyout by JPMorgan Chase, 'was severely complicated by the lack of a clear statutory framework' and that Congress should consider such a framework.

'A statutory resolution regime for non-banks, besides reducing uncertainty, would also limit moral hazard by allowing the government to resolve failing firms in a way that is orderly but also wipes out equity holders and haircuts some creditors, analogous to what happens when a commercial bank fails,' the Fed chief said.

He said another point to consider is 'a more fully integrated overview of the entire financial system', which he said 'has become less bank-centred'.

Earlier yesterday, billionaire investor Warren Buffett said the US economy is unlikely to improve before 2009, and that he expects the government to take action to support troubled mortgage financiers Fannie Mae and Freddie Mac.

Speaking on CNBC television, Mr Buffett said retail businesses within his Berkshire Hathaway Inc, insurance and investment conglomerate have been struggling and that the economy is now suffering from past excesses in the availability of credit.

'You always find out who's been swimming naked when the tide goes out. We found out that Wall Street has been kind of a nudist beach,' said Mr Buffett, the world's richest person, according to Forbes magazine. -- AFP, Reuters
Posted by Richard Yeo at 5:49 AM No comments: