It is seven months into the year, and while new private home sales have picked up from the lows seen earlier in the year, sentiments remain weak. 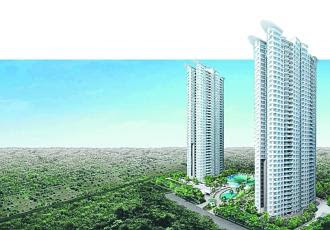 Showflats of newly launched developments like the 616-unit Clover by the Park in Bishan (left) are pulling in the crowds again, but most are very cautious about signing on the dotted line.

Some developers started to launch mass- to mid-market projects last month, drawing the crowds back to showflats. These include huge ones such as the 616-unit Clover by the Park in Bishan, the 724-unit Livia in Pasir Ris and the 521-unit Kovan Residences next to Kovan MRT Station.

But while the crowds are back, few are biting. Most are very cautious when it comes to signing on the dotted line. 'I visited showflats to get a feel of what's available but prices seem high to me. If I buy now, I am afraid that prices will fall further,' said a 32- year-old marketing manager.

Another potential buyer, who is 27, said he has decided to wait one to two more years after a recent futile search. Those new projects that he likes are beyond his reach.

Singapore's property market went up too much too quickly last year. Inevitably, there will be a correction or, as some market experts say, a possible reversal. Already, price growth has slowed to an estimated 0.4 per cent in the second quarter, down from 3.7 per cent in the first.

Mr Colin Tan, Chesterton International's head of research and consultancy, said: 'First, if you believe that there is such a thing called a property cycle, then the price decline is inevitable. The next question is: How deep will the decline be and how quickly will it reach the bottom?'

For now though, many developers are reluctant to lower prices.

'Developers will wait a while before lowering prices,' said DTZ's executive director and regional head for consulting and research, Mrs Ong Choon Fah.

Said a seasoned market watcher: 'Prices will fall. It's a question of how much. The US is likely to be in recession and it will hurt the rest of the world.

'Oil prices are rising. Inflation is a problem for Asia as it is unable to feed itself. This second half will tell you where things are going.'

Market watchers say many developers do not want to lower prices since they are quite well-capitalised.

Some of them had sold units at the height of the boom last year, so they will try to hold on. Other developers say they have deep pockets and can hold.

'There will not be a widespread price drop but certain developers, the small ones or the non-traditional ones, may lower their prices,' said the director of Savills Residential, Mr Ku Swee Yong.

Those that had launched earlier but have yet to get a contractor will be suffering, said the seasoned market watcher.

To hear developers put it, the lull is temporary as Asia remains very attractive to investors.

'On the whole, people still believe in Asia,' said Mrs Ong. 'Singapore has reinvented itself and is very different from 10 years ago.'

What it lacks now is confidence as the market outlook is still uncertain, she added. The problem, some think, is once you start lowering prices, where does it end, said Mrs Ong. 'Buyers may say that if you lower now, you may lower them again tomorrow.'

High-end prices have fallen nearly 10 per cent, according to Savills Singapore. Many say that if overall prices were to fall, the drop will likely not be steep.

How long will it last?

Some developers are hoping that the stand-off is short-lived as they quietly aim to launch their projects towards the end of the year. Some others are unsure and are prepared to ride out another quiet year or two.

'If good news happens, such as a prolonged easing of oil prices, I am quite sure a property recovery will take place towards the year-end, albeit at a slower pace,' said a developer who declined to be named.

'But if nothing's good in the market, I expect demand to remain sluggish and prices to ease further, especially the high-end ones.'

Well-located projects which are reasonably priced may be spared the poor demand, he said.

'Singapore is unique compared to most countries in the sense that our property cycles tend to have a very wide turning radius, that is, they take a long time to turn unless there is a catastrophe such as Sars or 9/11,' said Chesterton's Mr Tan. 'It is resisting any fall largely because long-term fundamentals are strong.

'If there is no recession, I expect the stand-off to be a long one as prices have risen quite a bit. But incomes have not kept pace.'
Posted by Richard Yeo at 12:23 PM No comments:

Low Keng Huat's plans to pour money into a 267,000 square foot development project in Vietnam must have raised a few eyebrows when it was announced earlier this month.

Against the backdrop of a 25 per cent inflation, 14 per cent interest rates and a Vietnamese dong that is expected to weaken a further 30 per cent before the year ends, market insiders are wondering if local property developers are simply whistling in the dark. 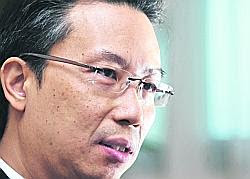 Low Keng Huat is not alone in digging its heels in the Vietnamese market, where property prices have fallen 30-40 per cent from their peak late last year.

Several weeks after the Vietnamese stock market lost 60 per cent of its value in June this year, CapitaLand - one of South-east Asia's largest property developers - announced plans to build 6,000 homes in Vietnam over the next three years.

Earlier this month, Frasers Hospitality told BT that it was looking for bargains in premium Hanoi and Ho Chi Minh areas, amid the carnage.

Despite the unabated enthusiasm for the Vietnamese market, the ride has been a bumpy one of late.

Developers in Vietnam have been hit hard by inflation across the board.

'The increased cost of construction have been quite substantial. There's been a 50 per cent increase because of more expensive raw materials and the sudden demand for contractors in Vietnam,' said Ang Wee Gee, Keppel Land's chief executive officer.

The cost of labour is also making itself felt.

'Labour costs have increased by 15 per cent since we signed a new agreement with labour unions in May this year, compared to the previous 5 per cent increase,' said Wan Yew Kwan, Low Keng Huat's general director for its Vietnamese hotel operations.

And the vagaries of doing business in an emerging market like Vietnam have gotten costlier.

'We've adjusted the wages of our Singapore staff in Vietnam upwards by 20-30 per cent because accommodation costs have gone crazy but we want them to live somewhere safe,' a spokesman for Mapletree Investments told BT.

A report by CB Richard Ellis Vietnam estimates that residential rental rates there will reach half that of Singapore and Hong Kong's this year.

Tenants are expected to pay US$40-45 per square metre for properties developed by international firms.

Choe Peng Sum, Frasers Hospitality's chief executive officer, noted, however, that rising prices have been underpinned by the fundamentals of rising demand.

'For the serviced apartment market, demand is still strong and supply is not excessive. We still see 80-90 per cent occupancy rates, even as guest rates have increased,' said Mr Choe, whose firm operates Fraser Suites Hanoi, a serviced apartment.

'Because the rates have gone up in tandem with demand, there has been no eating up of profits,' he said.

The sentiment is echoed by Keppel Land, which has the bulk of its Vietnamese interests in high-end residential areas in Ho Chi Minh City.

'The speculators have left and we are now seeing genuine buyers who are buying to stay,' said Keppel's Mr Ang.

While average selling prices (ASPs) might have plunged from their euphoric peak of US$3,500 per square metre late last year, Mr Ang is quick to point out that ASPs for their development in Ho Chi Minh City, The Estella, range from US$2,000 to US$2,500 per sq m, twice their expected ASP when Keppel bought the land last year.

'Our margins actually increased from the middle of last year. And ASPs for our projects are expected to hold,' he said.

Keppel Land, which has the largest Vietnamese exposure among local developers - valued at S$360 million in total - is convinced that stability is due to return to Vietnam.

'Economic indicators have turned a bit more positive. I'm confident that things will get better in six months to a year,' said Mr Ang, citing the country's improved trade deficits and a slower rate of increase ininflation.

The slower rate of gross domestic product (GDP) growth is also reassuring, with Vietnam clocking in its lowest GDP growth to date at 6.5 per cent in the first half of this year, compared to its breakneck rates of 8-9 per cent over the last decade.

Confidence in the Vietnamese government has also remained high with property developers.

'We think the government will be able to take care of the inflation and social unrest,' said the spokesman for Mapletree Investments, which currently operates two logistics parks near Ho Chi Minh.

So optimistic is their view that they are planning on venturing into residential development in Vietnam for the first time - as part of a 100 hectare business park township project.

Even rising interest rates have not dampened developers' interest in Vietnam, as most local house buyers are not expected to borrow heavily for residential purchases.

'The mortgage market is quite new in Vietnam. The Vietnamese are increasingly affluent and most of them are going to pay in cash,' said Keppel's Mr Ang.

Developers also appear to be taking the weakening dong in their stride.

'The Vietnamese's savings are going to be either in US dollars or in gold, so affordability will not be affected much,' said Mr Ang.

In any case, developments in residential, hospitality and office areas are currently billed in US dollars by developers, mitigating currency risk.

And where they are billed in Vietnamese dong, like the mid-level residential sales that Mapletree might soon have, such revenue will be immediately converted to US dollars on the spot rate, according to its spokesperson.

The Vietnamese dong interbank rate currently stands at 17,201 dong per US dollar, down almost 6 per cent from the beginning of the year.

Despite the recent turmoil, all developers have indicated that they are in Vietnam for the long haul.

CapitaLand, in its latest update on Vietnam, likened the property market there to China's 10-15 years ago, noting that it is a good time to get in for long term investors.

And while doing business in China 10-15 years ago might have been a daunting endeavour, Singapore firms have had a much easier time in Vietnam.

'There's still a fair amount of wheeling and dealing, but it is very businesslike on the whole.

'It is a great place for doing business as long as you do your due diligence and pick the right partner,' said Frasers's Mr Choe.

'You need a good reputation, a good network and holding power so that you can negotiate deals to your advantage. We pay very little capital upfront in Vietnam,' said Mr Ang from Keppel.

While Singapore's property developers might be whistling, they are certainly not in the dark.
Posted by Richard Yeo at 12:17 PM No comments: