A YIO Chu Kang cluster housing project, Amanusa, has been ordered to change its name after the Court of Appeal ruled that its developer had tried to pass it off as part of an ultra-luxe resort group. 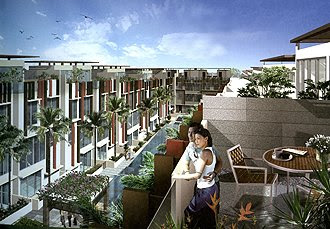 Amanusa buyers will not be able to back out of the sale on the basis of the name change. -- PHOTO: DTZ

In February 2006, Aman Resorts, which owns the Amanusa resort in Bali, learnt about Novelty's use of the same name through the latter's advertisements.

It asked Novelty to change its name, and when Novelty refused, it sued.

According to court documents, Aman claimed Novelty had tried to pass off its properties as Aman Resorts' 'with the intention of confusing or deceiving members of the public.'

The High Court had ruled against Novelty in May 2007; Novelty appealed, but lost again in the Court of Appeal, the highest court here.

Room rates at Amanusa start from US$700 per night. Aman Resorts also operates 15 other luxury resorts in exotic locales like Morocco and Bhutan.

Aman Resorts, which moved its corporate headquarters from Hongkong to Singapore in 1999, does not have any properties here.

Novelty's Amanusa, comprising 36 freehold three-storey houses built on a 56,000 square foot site off Old Yio Chu Kang Road, was priced at about $450 per square foot. Each unit reportedly sold for between $1.3 million and $1.8 million. The developer is behind other condominiums like Tanjong Katong's Taipan Jade and Newton's Iridium.

In his ruling, said Justice Rajah, said that Novelty's use of the Amanusa name had indeed created 'a likelihood of confusion arising from the misrepresentation'.

In addition, he said, Novelty's use fo the name 'is likely to tarnish the goodwill attached to the 'Aman' names because of the difference in quality of the accommodation provided' the two parties.

Amanusa buyers will not be able to back out of the sale on the basis of the name change. According to the judgement, buyers had signed off on a clause that they would go ahead with the transaction even if the name was changed to something else.
Posted by Richard Yeo at 9:16 AM No comments:


WHERE THE SALES COMMITTEE ERRED

# By not acting with due diligence and transparency in appointing the marketing agent, First Tree Properties, which has two shareholders, neither of whom is a licensed valuer. The appointment was done in haste and 'reflected a lack of conscientiousness';

# By failing to follow up on a higher offer for Horizon Towers made by Vineyard Holdings, a Hong Kong company;

# By not using the Vineyard offer as leverage in negotiations with Hotel Properties Ltd (HPL), the eventual buyer of the estate;

# By not getting advice from an independent property expert prior to the sale;

# By proceeding with the sale to HPL in 'undue haste' in a soaring property market;

# By ignoring conflicts of interest. Two of the sales committee members - Mr Samtani and Mr Tan - had bought additional units in Horizon Towers with the help of 'substantial' bank loans right before they were appointed to the committee. They did not disclose these purchases. First Tree was also eager to seal a deal before its mandate as marketing agent expired;

# By not consulting, or even updating, the majority owners on the sale, despite knowing that the property boom had pushed up the market value of the individual units and significantly eroded their estimated premiums from the collective sale.


WHERE THE STB ERRED

# By refusing to subpoena Mr Arjun Samtani to testify;

# By allowing the sales committee to assert 'legal privilege', that is, to not divulge the advice it had received from its lawyers;

# By not considering whether there was a possible conflict of interest in the sales committee members' purchase of additional units;

# By not asking whether the price was the best one 'reasonably obtainable';

# By concluding that the original sales committee had 'acted in good faith' in selling the property to HPL just because the committee had received and relied on legal advice.


WHERE JUSTICE CHOO HAN TECK OF THE HIGH COURT ERRED

# By taking a 'restricted view' of the duties of a Strata Titles Board in approving a collective sale;

# By deciding that the only issue to rule on was that of price, and that the STB had determined the price was fair.
Posted by Richard Yeo at 9:12 AM No comments:

THE Urban Redevelopment Authority says that a reserve list hotel site in Short Street has received a committed bid of $8.8 million from an unnamed developer and the site will now be put up for public tender.

The trigger price works out to about $200 per sq ft per plot ratio.

URA said that the site can accommodate between 90-100 hotel rooms.

Cushman & Wakefield managing director Donald Han said that based on market conditions, the final tender price may not be too far off from the trigger price.

'There has been a huge drop in hotel occupancy levels,' he said, adding that occupancy and revenue per available room are estimated to have fallen by 20 per cent in recent months.

Chee Hok Yean, executive vice-president at Jones Lang LaSalle Hotels, also reckons the trigger price is fair, given weak economic conditions, lower tourists arrivals and impending supply. 'The site is in a revitalised precinct and will have potential for a new concept lodging facility,' she said.

In October 2008, a hotel site at Kallang and Jellicoe roads was sold for $51 million or about $250 psf ppr. There was only one bidder in that tender.

Given that the Short Street site is well located, the trigger price does seem low.

Robert McIntosh, executive director at CBRE Hotels, said that with prices of new developments falling, it is not surprising that land prices should follow. He believes the potential developer of the Short Street site is likely to position the hotel as either a three-star or boutique establishment.

On the upside, he noted that construction costs have been falling 'rapidly'.

URA will launch the public tender for the site in about two weeks, and the tender period will be about eight weeks.
Posted by Richard Yeo at 12:06 AM No comments:

The minority owners of Horizon Towers have finally won the fight to block the $500 million collective sale of the development, ending a battle that lasted more than two years.

The Court of Appeal yesterday dismissed the en bloc sale after several owners appealed to it to throw out last July's High Court decision, which backed the sale of the property to Singapore-listed Hotel Properties Ltd (HPL) and its partners Morgan Stanley Real Estate and Qatar Investment Authority.

Yesterday's judgment is final - and means that the sale of Horizon Towers will not go through.

In the judgement, Justice V K Rajah also redefined the duties of a sales committee and the Strata Titles Board (STB) when dealing with collective sales. But some market watchers say that sales committees may find the new scope of duties difficult to carry out.

The judgment marks the first time that the Supreme Court has decided in favour of minority owners in a disputed en bloc sale, said the minority owners' lawyer Philip Fong, a partner with Harry Elias Partnership.

The Horizon Towers saga began in January 2007 when the majority owners accepted a price of just under $850 per square foot (psf) of gross floor area for the 99-year leasehold property in Leonie Hill.

But when the property market continued to boom after the deal was signed, many owners believed that the $500 million reserve price was too low. Residents who were against the sale argued that it was done in bad faith and said that a higher $510 million offer from Hong Kong firm Vineyard Holdings was not taken seriously.

STB and the High Court dismissed the minority owners' objections. The High Court decided that as long as STB finds that a purchase price is fair, it has fulfilled its duty and is entitled to approve an en bloc sale.

But yesterday, overturning the High Court and STB rulings, the Court of Appeal ruled that there were problems with the sale of Horizon Towers from the start. Justice Rajah said that the sales committee did not fulfil its duty because it did not secure the best price obtainable for the property.

In his judgment, he also spelled out the court's view of a sales committee's duties. Among other things, a sales committee is expected to follow up all expressions of interest and offers, and carry out sufficient investigations and due diligence to determine their genuineness. A sales committee is also tasked with creating competition between interested purchasers and 'waiting for the most propitious timing for the sale in order to obtain the best price'.

Likewise, Justice Rajah said that STB must play a pro-active role when it comes to disputed cases, rather than simply listening to the evidence and arguments of both sides and then ruling on their differences.

'Despite the reference to its 'mediation-arbitration' function, STB has a significant inquisitorial role to play,' he said. 'It is not confined to what is presented to it by the contending parties, but must seek out the facts whenever there is evidence that the SC (sales committee) has not disclosed everything about the transaction to STB.'

Market players welcomed the greater clarity on the duties of sales committees and STB, but said that the new guidelines could dampen the collective sale market. 'The imposition of the more defined duties and standard of conduct for a sales committee may deter owners from volunteering to serve on the committee,' said Karamjit Singh, managing director of Credo Real Estate.

Justice Rajah also pointed out that a primary objective of the collective sale scheme was to promote the rejuvenation of older estates and the optimal use of prime land to build more quality housing in land-scarce Singapore. But now, 'the lure of 'windfall profits' has been a siren song for many (especially absent landlords and speculators), to the detriment of those who do not want to lose their homes at any price', he said.

The Court of Appeal's ruling means that HPL and its partners will not be able to go ahead with their plan to build a 253-unit condo and eight detached houses on the site.

At $850 psf of gross floor area, the developers would have had to sell new units at about $1,500 psf to make a small profit - which might be possible for them to attain even in today's depressed property market.

The would-be buyers are not better off for having had the sale fall through, said one industry veteran. And likewise, the owners will get to keep their homes but will not get a much better price now than what HPL and its partners offered in 2007.

'At this stage, it does not appear that there is a clear winner or a major loser,' said the industry veteran.
Posted by Richard Yeo at 12:03 AM No comments: