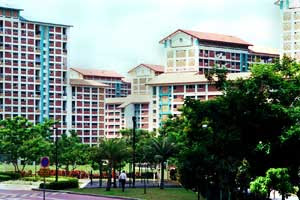 林东荣说：“罗弄泉站附近的金山岭公寓一年前每平方英尺的售价为950元，现在跌至800元，新的地铁站启用后，可能会回升到约850元。”
Posted by Richard Yeo at 10:26 PM No comments:

莫思思指出，昨天出售的两个商业房产受买家欢迎是因为它们已有现成租户，而租金回报率非常吸引人，中央工业大厦厂房和菜市通道的组屋商店的租金回报率分别为6.5％和7.95％。
Posted by Richard Yeo at 10:24 PM No comments:

截至本月21日，金成兴控股发行的约2亿零986万的凭单附加股，为集团带来了176万元的收入，其中24万9000元已用作偿还发行凭单的相关费用。与此同时，有311万6000个凭单被转换，为集团筹得了31万1600元资金。集团表示，将用这＋笔资金来偿还债务及作为营运资本。
Posted by Richard Yeo at 10:22 PM No comments:

But weak rebound likely, with housing starts near WW2 low

(BOSTON) The slump in the US housing market that caused the median value of homes to decline 24 per cent since 2006 may bottom next month without any prospect of a rebound for another year, according to estimates from chief economists at Fannie Mae and Freddie Mac, the Mortgage Bankers Association and national realtors and homebuilder groups. 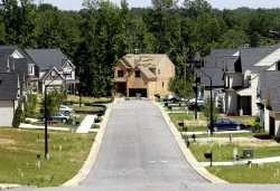 End of the road: New-home sales traditionally lead all other indicators in a recovery but it may not be the case this time, say economists

'There are very few V-shaped recoveries in the history of real estate, and this one is likely to be even slower because of the size of the bubble,' said Robert Shiller, the Yale University professor who, with economist Karl Case, created home price indexes in the 1980s now used by Standard & Poor's.

The rebound will be so anaemic that 2009 building starts will total about 496,000 homes, the lowest since the end of World War II in 1945, according to the economists' forecasts.

Foreclosures on pay option adjustable-rate mortgages and a backlog of bank-owned properties will slow any revival and keep housing from playing its traditional role of boosting economic recovery.

Residential construction and home sales led the way out of the previous seven recessions, with housing starts improving an average seven months and resales gaining strength about four months before the economy picked up.

The world's largest economy probably will grow 1.9 per cent next year, according to the average estimate of 56 analysts surveyed by Bloomberg. After each of the last seven contractions, it expanded more than 3 per cent on average in the first year of recovery.

Federal Reserve Bank of Dallas president Richard Fisher said earlier this month that the US is on the verge of rebounding with 'healthy signs - the stirrings of what I call green shoots.' So did former Fed chairman Alan Greenspan, who cited 'seeds of a bottoming' in housing during a May 12 speech at a National Association of Realtors conference in Washington.

'If you are looking at prices relative to income and rents, you could argue that we are at the bottom, and I'm cautiously optimistic that we may be,' said Thomas Lawler, a former Fannie Mae economist in Leesburg, Virginia. 'It's possible, however, that we could have a second wave of foreclosures and the very small amount of support the economy might have gotten will turn into the reverse.'

The recession started after US banks and Wall Street firms securitised mortgage loans made to the riskiest borrowers to earn fees only to see homeowners default, prices fall and the value of the bonds dwindle.

Homeowners like Craig Mitchell of Boise, Idaho, said they're paying the price for Wall Street's greed. Mr Mitchell, 66, said his video-editing business has dwindled in the recession. He said he's now being forced to sell his truck to make his mortgage payment while he seeks a buyer for the three-bedroom home he owns in a state with the fifth-highest foreclosure rate in the US.

Mr Mitchell may be waiting a long time for a buyer as the housing market tries to recover from the worst slump since the Great Depression.

While new-home sales traditionally lead all other indicators in a recovery, it may not be the case this time because the drop has been unlike any other since the 1930s, Mr Lawler said.

'History suggests that new-home sales bottom long before unemployment peaks, and perception of the economy starts to improve long before we see actual economic improvement,' Mr Lawler said. 'This time around we don't know if that will hold true.'

Prices in California fell for six years during the last major housing slump in the 1990s, and didn't return to their 1991 peak until 2006, according to the Federal Housing Finance Agency.

About US$40 billion of mortgages at US banks have payments 90 days or more overdue, more than triple the US$11.5 billion of homes the banks already hold, according to data from the Federal Deposit Insurance Corp in Washington. Another US$78.8 billion are 30 to 89 days overdue, the FDIC said. -- Bloomberg
Posted by Richard Yeo at 10:08 PM No comments:

Some developers have raised prices as a result.

BelleRive on Keng Chin Road and Martin Place Residences on Kim Yam Road are among the projects where prices have been raised. BelleRive's average price is now 13 per cent higher than when it was previewed in mid-April. 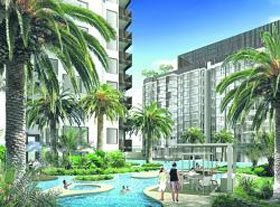 Frasers Centrepoint sold 60 more units last week at Martin Place Residences; new units were released over the weekend at prices that were about 5-7 per cent higher.

Last week, the property giant sold more than 40 units, up from the 30 a week earlier. Far East's home sales for the May 18-24 week include two units at Vida on Peck Hay Road which fetched an average price of $2,030 psf; the buyers did not take up the rental guarantee offered by Far East for the recently completed condo. The developer also sold nine units at Floridian in Bukit Timah at an average price of $1,220 psf.

In the upgrader housing segment, it sold seven units at Mi Casa in Choa Chu Kang, nine units each at Lakeshore near Jurong Lake and Waterfront Waves near Bedok Reservoir. Waterfront Waves is a joint development with Frasers Centrepoint.

Frasers Centrepoint also sold four units each at its Caspian condo in the Jurong Lake location and Woodsville 28 last week.

At Martin Place Residences, the developer released fresh units below the 14th floor sky terrace in the second and final block in the 33-storey condo.

Prices of the freshly released units start from $1,350 psf, higher than the $1,260 psf starting price in the earlier block during the preceding weekend's marketing campaign.

However, the latest pricing is still below the $1,700 psf starting price for the 33-storey freehold project when it was previewed last year. Inclusive of the units sold last week, 168 units in the 302-unit condo are now sold.

Frasers Centrepoint is offering an interest absorption scheme (IAS) for all its four projects on the market - in exchange for a 3 per cent price premium for Caspian and a 2 per cent premium for the rest.

Over in Bukit Timah, a Sing Holdings subsidiary is understood to have sold five units last weekend at BelleRive, taking total sales to 39 units in the 51-unit freehold project. BelleRive was initially priced at $1,350 psf average when it was previewed in mid-April; this was raised to $1,430 psf last week and upped further to $1,530 psf this week. This translates to a 13 per cent price hike in about six weeks.

The average pricing is for the apartments in the 15-storey project, and excludes the two penthouses. About 75 per cent of BelleRive buyers have taken up the IAS offered by the developer at no extra cost.

The units were picked up predominantly by Singaporeans. BelleRive's draws include its proximity to Anglo-Chinese School (Primary) on Barker Road and Singapore Chinese Girls' School along Dunearn Road.

In the Balestier area, Soilbuild is understood to have sold another 25 units at Mezzo over the weekend. The project is priced at about $850-900 psf on average; the cost is 2 per cent more for IAS.

Property giant City Developments also sold 14 units last week for The Arte at Thomson condo. The average price in the project is now $900-930 psf, compared with $880 psf when previews began in March. The 336-unit condo is 84 per cent sold.

Near Botanic Gardens, Straits Trading has upped the price of the remaining few units at Gallop Gables to $1,400 psf, from the $1,188 psf average achieved for units sold in the past six weeks. The price increase comes after the developer achieved the sale of its 40th unit in the completed freehold condo.

In the secondary market, some 50-plus units are said to have been sold last week at RiverGate condo near the Singapore River. These are out of 88 units listed in a sales campaign last week. The average price is about $1,400 to $1,500 psf.

The 88 units were from an original pool of 100 units purchased in 2005 by a fund managed by Ferrell Asset Management.
Posted by Richard Yeo at 9:55 AM No comments: 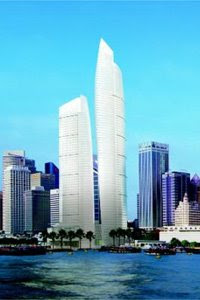 获得优异奖的5座建筑是私人共管公寓Parc Emily、樟宜机场的皇冠假日酒店、瑞吉酒店和瑞吉居、滨海南码头和地铁环线第一阶段工程。
Posted by Richard Yeo at 9:53 AM No comments: