PROPERTY company PropNex is dropping its lawsuit against a couple who refused to pay the seller's agent the 1 per cent commission after buying a home.

Both sides reached an agreement after a mediation session on Tuesday, which PropNex said yielded a 'win-win' conclusion. They declined to disclose the terms of the settlement. 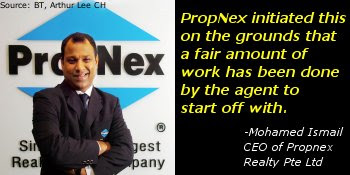 If the case had gone to trial, it would have turned the spotlight on the contentious issue of whether home buyers should pay a fee to sellers' agents.

PropNex associate director Ricky Low Yong Sern, who was the only agent handling the sale of a terrace house in Whampoa last year, had sought about $4,000 in commission or a service fee from the buyers, marketing specialist Loh Yi Min, 29, and his wife Ariel Wee, a 33-year-old polytechnic lecturer.

The couple bought the house - built over 30 years ago and classified as a Housing Board flat - for $400,000 in April last year. They did so without hiring an agent.

According to court documents, PropNex's Mr Low claimed that he had provided services to them.

But the buyers refused to sign the commission agreement, saying they had not agreed to pay him a fee.

PropNex chief executive Mohamed Ismail said of the first such lawsuit initiated by his company: 'It has been amicably settled, so we are withdrawing the case. PropNex initiated this on the grounds that a fair amount of work has been done by the agent to start off with. This negotiated settlement takes into consideration both parties' views.'

Ms Wee, however, called for rules requiring property agents to state clearly what services they were providing independent buyers that would justify the commission.

'And we really need to see whether the same agent can represent both the buyer and seller - it's a complete conflict of interest,' she added.

The issue of commissions payable by buyers who deal without agents has been hotly debated in recent years. The law does not fix agents' fees, but most property sellers pay their agents a commission of 2 per cent of the selling price, while buyers foot 1 per cent.

Many agents marketing HDB flats also charge independent buyers a 1 per cent fee, but this is not practised for transactions involving private property.

This difference, say agents, comes from the lower prices of HDB flats, which translates into a lower commission. The sale of HDB flats involves more paperwork, they add.

Disputes arise when sellers' agents tell independent buyers about the commission only just before sale papers are signed.

Agents, on their part, say independent buyers often leave the sellers' agents to handle the paperwork but refuse to pay a service fee.
Posted by Richard Yeo at 10:25 AM 1 comment:

THE fitness chain True Yoga will have to find a new position to assume in the business district after one of its outlets got its marching orders, but it might be a bit of a stretch given the shortage of office space.

True Yoga and other tenants, including chemist Watsons and the Denise wine shop, must leave the retail block at the OUB Centre at Raffles Place to make way for a $530 million office tower.

The yoga and fitness centre, which takes up more than 30,000 sq ft across four floors of the low-rise retail podium, will close at midnight next Thursday.

The other tenants must leave by the end of this month.

True Yoga has not yet secured another site, but its clients can use the group's other two outlets at Pacific Plaza and Ocean Towers in Raffles Place. It has also arranged for its fitness clients to use facilities at Planet Fitness for six months and further extended membership packages for another six months.

The podium sits next to the 60-storey OUB Centre office tower, which will not be affected by the redevelopment.

True Yoga said yesterday that it was first told of the landlord's plans on Jan 31 and given three months' notice.

It was then granted extensions on a month-to-month basis as there had been a chance the development plans might be delayed. OUE then confirmed on April 4 that there would be no further extensions, as construction would start next month.

'We have been actively looking for alternative locations,' a True Yoga spokesman said last night.

'It is not easy to locate a site of this magnitude within such a short time since the final notification on April 4.'

Some True Yoga clients were upset with the late notice of the closure.

Although the new office block will be ready only in three years, OUE has already started leasing talks with potential office tenants.

Such forward leasing action is common these days, given rising supply looming in the next 12 months and beyond.

A significant portion of OUE's $530 million outlay will go to the Government for increasing the site's allowable gross floor area and topping up the site's lease from 75 years to 99 years.

Three floors in the new tower will be devoted to retail and the rest to offices. The entire block will have a total gross floor area of 45,158 sq m.

The development comes amid a boom time for office development, particularly in the business district, though there are concerns of an oversupply after 2010.

Rents have surged in the past year, with prime Grade A rents now hovering between $17 per sq ft (psf) and $18 psf.

'There are now two market rates at work, depending on the occupation period,' said Mr Donald Han, managing director of Cushman & Wakefield.

Rents at OUB Centre Tower 2, if already ready, could be about $18 psf. Forward rental rates for the same building, however, would be lower - possibly $15 psf to $16 psf - considering rising supply, he said.

True Yoga was in the headlines last month when sovereign wealth fund Dubai International Capital snapped up a key stake in the firm.

'It is not easy to locate a site of this magnitude within such a short time.'
A TRUE YOGA SPOKESMAN, on the fitness centre having to find another location after being told to leave its 30,000 sq ft outlet at OUB Centre
Posted by Richard Yeo at 10:14 AM No comments:

A-REIT To Buy Business Park Building In Jurong For S$246.8m

It includes three office towers, an auditorium and a 2,000-capacity outdoor amphitheatre.

The site has another 16 years left to its 30-year lease, but this could be extended for another 30 years.

A-REIT said the proposed acquisition, to be funded by debt or equity, is in line with its strategy of enhancing its portfolio over time. - CNA/ms
Posted by Richard Yeo at 10:03 AM No comments:

Conglomerate Fraser and Neave (F&N) on Friday said it is looking to expand its food and beverage business in a bid to rebalance profit contributions from its other businesses. 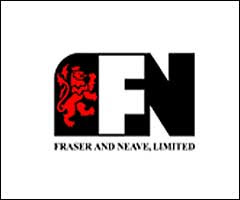 For the half-year ended in March, F&N booked a nearly 12 percent rise in earnings on-year to S$205 million. Revenue rose by the same margin to S$2.5 billion.

The property business is driving growth for F&N. Commercial properties led the way, thanks mainly to higher management fee income, and strong occupancy and rental rates.

Hui Choon Kit, General Manager, Treasury and Budget, Fraser and Neave, said: "Not only is the commercial property business doing very well, but from the presales of projects, we will continue to be able to deliver good earnings.

"So now the property earnings are very strong; 55 percent of PBIT (profit before income tax) comes from property."

Anthony Cheong, Group Company Secretary, Fraser and Neave, said: "This has been the result in property profits over the last few years, which has outstripped the performance of all our other business groups.

"Without wanting to hold back on property, we still see the need to rebalance the profit contributions from... the various core businesses, and one way of achieving a great leap must be through M&A."

The food and beverage business is one segment that F&N intends to expand.

Mr Cheong said: "As you know, I think we've received S$900 million from Temasek about a year ago, principally for the development of the F&B business, and you can expect that there is quite a lot of focus in that area."

F&N said that the current market presents excellent opportunities to make investments at more reasonable values. It is proposing to pay an interim dividend of 5 cents a share.

Meanwhile, the aftermath of Cyclone Nargis affected F&N's operations in the outskirts of Yangon.

Mr Cheong said: "The brewery building was damaged slightly and one sales office in Yangon was wiped out, but none of our employees have been injured, although a few have lost their homes.

"Because electricity and communication lines are down, we have great difficulty trying to get an update of the situation. But I think, one can expect that not very much beer will be drunk in the coming months. I think sales will be affected - we expect that.

"But the principal concern of course is recovery efforts and... to try and alleviate the plight of all those affected. I think the brewery is trying to do that as well by supplying water trucks to nearby villages." - CNA/ms
Posted by Richard Yeo at 10:01 AM No comments:

裕廊集团上个月以17亿1000万元，将手头上一些高楼现成厂房脱售给丰树投资，但却暂时不会按照原订计划，将这些资产纳入工业房地产投资信托中上市。
Posted by Richard Yeo at 9:39 AM No comments: