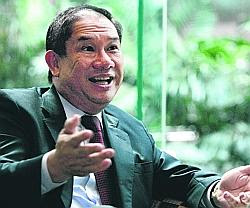 The distributor for automotive products and agriculture equipment said that The Surawongse will be sold at an average 120,000 baht (S$5,232) per square metre. Sizes of units range from 43 to 72 sq m.

If all units are sold, the development should reap 400 million baht, said Timothy Yong, Hup Hoon executive director, or double its construction cost of about 200 million baht.

Hup Soon has roped in a partner Chewathai Limited (CWT) which will put up 84 million baht in cash with this going towards paying the construction costs. The shortfall will be funded by bank borrowings.

'The debt/equity ratio of CHS will be kept low, and this will allow it to ride out any uncertainties in the Thai property market,' he said.

Already, 10 per cent of the project has been sold to staff, he said.

Construction is expected to take about 24 months and Hup Soon is confident that the project will sell well despite the country's volatile political situation and global economic crisis.

'Notwithstanding the negative sentiment caused by the domestic political situation and global credit tightening, The Surawongse . . . is a niche project aimed at local and overseas investors,' said Timothy Chia, Hup Soon deputy chairman.

'We are hoping to target the large number of working expatriates who require accommodation in the Silom and Surawongse area, and people who have lived in the Surawongse area for a long time and want to look for additional housing space for their extended families,' he said.

Mr Yong added that investors looking for an alternative investment in the current climate might see the project as a yield play.

'It's not a big amount, those with spare change might see it as an alternative asset investment and yield play,' he said, adding that he thinks that the potential rent could yield about 6 per cent.
Posted by Richard Yeo at 8:04 PM No comments:

LONDON - Britain's economy will shrink by 1.5 per cent next year and unemployment could rise as high 2.5 million in 2010, the National Institute of Social and Economic Research forecast on Monday.

These figures do not take account of any fiscal stimulus measures announced by the government in its pre-budget report later on Monday. The thinktank calculates that a 30 billion pound package could improve growth by 1 per cent next year.

'We expect the UK economy to shrink for six quarters in a row, with the economy not starting to recover until early 2010,' NIESR said.

Inflation was likely to fall below the Bank of England's 2 per cent target over the medium term, with a one in ten chance of deflation, so there was further room to cut interest rates, NIESR said.

If oil prices had not fallen sharply, growth would be even weaker, and employment could even reach 3 million if recent migrants did not leave Britain, it added. -- REUTERS
Posted by Richard Yeo at 8:02 PM No comments:

Call it down and out of Singapore.

Amid leaner economic times, companies here are cutting costs and one option is to reduce the number of expatriates.

At least one employer - Fortis Bank - has asked some of its foreign staff to pack their bags, and the recent job cuts announced by financial giant Citigroup could see more departures.

Indeed, several moving companies tell The Sunday Times that their business has been boosted in recent months.

Most of his clients are families heading back to the United States while others are returning to Europe and Australia.

Ms Angelika Si Hoe, director of moving broker Cross Roads, has seen a 20 per cent jump in the number of clients compared to the previous year - even though the year has not ended.

At least 10 per cent of these cases stem from layoffs in the last two months.

'Some are quite distressed when they come to me because they just lost their job and don't know where they are going to. It's very difficult for them as many have children,' she said.

White-collar expatriates typically hold employment passes. According to the Ministry of Manpower, there are 99,000 employment pass holders as of December last year.

Another indication of expatriates moving out is reflected in the housing market.

'They are exploring options and doing their sums. This is an indication that they want to get out,' he noted.

As most expatriate rental leases last two years, companies have been asking landlords if they are open to the idea of finding a replacement tenant for the remaining period, he added.

These inquiries, which currently number fewer than 100, are mainly from the finance sectors.

Some property agents have also observed that expatriates who are staying put are increasingly price-conscious. They are moving from the central areas to the suburbs where rentals are cheaper by at least 30 per cent.

On the education front, a check with four international schools - United World College of South East Asia, Tanglin Trust School, Singapore American School and Canadian International School - shows there has not been a significant impact on withdrawals and waiting lists yet.

They said the effect will be more clearly seen next year.

'Many expatriate schools start around August so we would be able to see if there's any trend only in mid-2009,' said Singapore American School communications director Beth Gribbon.

The same tale is told by international business networks here. Said Australian Chamber of Commerce executive director Annette Tilbrook: 'It is very early days and there is no obvious difference. We always have a reasonable outflux of expats at this time of the year. What we don't know is whether there will be replacements next year.'

An Australian expatriate, who wanted to be known only as David, is one of those leaving.

The 45-year-old came three years ago to start his logistics firm but is returning to Melbourne with his wife and daughter because business has dived by 60 per cent in recent months.

'I don't think anyone saw this coming. First, the petrol crisis, then this. This was the straw that broke the camel's back,' he said.

A regional sales director at an American technology firm has also been asked to go because of cost-cutting. The 34-year-old and his wife plan to spend the next few months backpacking before returning to the US.

'The job market we're going back to in the US is pretty bad so we're not intending to return immediately,' he said.
Posted by Richard Yeo at 12:03 AM No comments: