TRAFFIC and transportation plans to transform Singapore's city streets into a race circuit for the 2008 Formula 1 SingTel Singapore Grand Prix were unveiled yesterday. 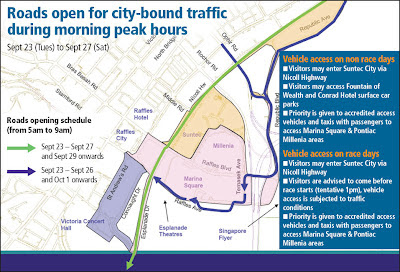 A series of road closures in the Marina Centre area will be implemented between Sept 20 and Oct 2 in three phases. Among the roads that will be either closed or restricted are St Andrew's Road, Raffles Avenue, Nicoll Highway, Esplanade Drive, Stamford Road and Temasek Avenue. Traffic wardens will be on hand to direct traffic.

'The best way to travel to the area is to use public transportation,' said Yam Ah Mee, chief executive of LTA, highlighting that congestion and delays were expected on the roads.

Stakeholders, such as those working in the area and delivery vehicles, will be given accredited labels for priority access into restricted areas. Public transportation services are also gearing up to cope with the high volume of commuters. Trains will be running every two to three minutes during peak and race dispersal periods, as opposed to the average three minutes currently. Operating hours for public transportation may also be extended.

However, 26 bus services will be diverted to nearby roads and the Marina Centre Bus Terminal will be closed during road closure periods. Non-basic bus services, such as the Night Rider and Premium Buses, will also be affected. Information regarding the diverted routes will be available at affected bus stops and on the websites of the public transport operators.

A complimentary shuttle bus service from Bugis and City Hall MRT stations will run between Sept 20 and 29, carrying passengers to four stops along North Bridge Road and in the Suntec City area.

The two existing taxi stands at Suntec Tower 2 and 3 will remain operational, while a third temporary one will be set up at Suntec City Driveway. Other operational taxi stands are at the Millenia Tower and the Conrad Hotel.
Posted by Richard Yeo at 11:56 PM No comments:

CITY Developments Ltd (CDL) has begun to preview its much-awaited Livia condo at Pasir Ris at an average price of about $650 psf for the initial batch of units, BT understands.

And next to Kovan MRT Station, the 512-unit Kovan Residences is being soft launched today and the average price is said to be $870 psf. Both projects are 99-year leasehold.

Market watchers reckon that the $650 psf average pricing for the initial phase of Livia's marketing effort is about 10 per cent lower than what the developer could have fetched 12 months ago. 'It might have been priced at $730-750 psf last year,' an industry observer suggested. The 724-unit condo is being developed at Pasir Ris Drive 1 on a plot that is part of the group's historical Pasir Ris landbank acquired decades ago.

CDL is developing Livia jointly with Hong Leong Holdings and Hong Realty. All three companies are part of Singapore's Hong Leong Group. Livia will have a total of 10 blocks, either 15 or 16 storeys high with units ranging from two-bedroom apartments to four bedders. There are also 12 penthouses.

Next to Kovan MRT Station, Centurion Kovan, controlled by UOB-Kay Hian stockbroker pair Han Seng Juan and David Loh Kim Kang, has been testing the waters for its 512-unit Kovan Residences. The average price is believed to be around $870 psf and industry talk is that some 20 cheques were offered to the developer after a well-attended dinner preview for Messrs Han's and Loh's stockbroking community contacts last Saturday. It is not known if options have been issued.

'Perhaps some of the potential buyers may have found the developer's proposed price a little challenging and made their counter offers with cheques,' a market watcher suggested.

Kovan Residences' soft launch begins today, BT understands. Officials from Centurion Kovan, part of the Duchess Development group, have not been returning BT's calls over the past few days.

Meanwhile, the project that started the current home buying wave, Ho Bee's 99-year leasehold Dakota Residences, is said to have sold 150 units since sales began a fortnight ago.
Posted by Richard Yeo at 11:54 PM No comments:

DRIVEN by rising corporate demand, Frasers Hospitality (Frasers) expects to grow its brand of serviced apartments to 8,500 by 2010. This will involve adding 5,000 apartments under the Frasers brand in the next two years.

China, India and Vietnam are three key areas of expansion for the hospitality arm of Frasers Centrepoint, a wholly owned subsidiary of Fraser & Neave. At least 80 per cent of the 5,000 serviced apartments will come under fee-based management, said its CEO Choe Peng Sum. Frasers will acquire the remainder with balance sheet funding.

'We have been very careful about over-leveraging and over-borrowing,' said Mr Choe. Frasers currently has a 50:50 debt-equity structure, but hopes to reduce the debt component to reach 40:60 or lower going forward.

'For serviced residences, we've seen a lot of pent-up demand,' said Mr Choe. According to him, multinational corporations have been sending teams overseas to set up new operations, and serviced apartments are aptly positioned to meet expatriates' extended-accommodation needs.

Yet, the number of serviced residences in major cities such as London and Tokyo add up to barely 10 per cent of total hotel inventory, he noted. On room rates, Mr Choe said: 'Singapore itself, we have seen year-on-year growth rates of about 26 per cent.'

With the large growth potential, Mr Choe shared that Frasers is looking at creating a separate brand of serviced residences to cater to a more dynamic group of corporate guests, or 'road warriors'.

Hiccups in some economies may create more chances for expansion.

The property market in North America has softened, said Mr Choe, and Frasers is sourcing for deals in New York. In Vietnam, falling property prices also generate investment opportunities. As to whether Frasers will set up a Reit for its properties, Mr Choe said that 'we are waiting for the right time'.

The US$135 million Fraser Suites CBD in Beijing has opened for operations.
Posted by Richard Yeo at 11:52 PM No comments:

曹炳森没有透露更多详情，但新品牌相信会首先在亚洲推出，以收费代管理合约形式进行。至于母公司星狮集团（F&N）刚宣布的新管理层以及把重心放在饮食业务方面计划，曹炳森表示，公司一向独立运作，新格局不会限制公司的拓展计划。
Posted by Richard Yeo at 1:32 PM No comments:

不过，如果是在2007年才进场，并以平均每平方英尺1520元买下泊宁轩单位的人，净租金回报率就只有3.5%了。但如果跟在本岛买下一间永久地契豪华共管公寓单位比较(净租金回报率估计只有大约2.3%)，这些投资者还是能够享有较高的租金回报率。
Posted by Richard Yeo at 8:56 AM No comments: