Buyers And Sellers At Stand-Off

Analysts caution that banks here may not rush into home foreclosures

THEY are flocking to the auction houses, hoping to find bargains. But each time the starting price is called out, there are audible sighs and shaking of heads. Still too high, say those who have been frequenting property auctions in recent weeks.

Expectations are growing for some fire sales in the local property market, which is increasingly weighed down by the global economic downturn. People who thronged two recent auctions told Today they were keen to sign on the dotted line, but the asking prices remained high, they lamented. 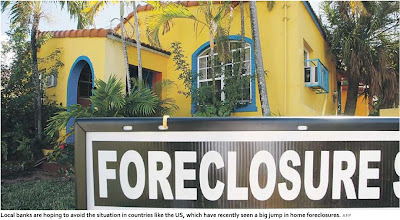 At a Colliers auction three weeks ago, only one out of 12 properties put up for sale was sold. It was a similar situation at an auction held by Knight Frank, where only one out of 17 properties went under the hammer while many attracted no bids at all.

So desperate was the auctioneer at one of the sales that she asked: “Are there any bids — or counterbids?”

A counterbid means an offer below the asking price.

One woman scouting for shop space said she had been visiting auctions and returning home empty-handed. What she is hoping for is a fire sale.

Analysts, however, caution that they do not anticipate such sales to be pervasive.

Said Mr Eugene Lim, ERA’s Asia Pacific associate director: “Isolated cases (of fire sales) will continue, but not very widespread. If it’s widespread, the market will crash ... That has not happened and I don’t see it happening for the time being.”

There has been keen interest in both the residential and commercial property sectors from buyers looking to pick up bargains in well-located areas, said Ms Grace Ng, an auctioneer and deputy managing director at Colliers. She added that there have been several enquiries for commercial properties in places such as Toa Payoh, Ang Mo Kio and Clementi, which are in the heart of the town centres and with good frontage.

“There is a healthy interest from buyers, but price-wise, there is still a gap between what sellers are asking and what the buyers are willing to fork out,” said Ms Ng. “The prices that the sellers are quoting are close to valuation, but buyers are offering below that level.”

Both sides are adopting a wait-and-see attitude and the stand-off could last a while yet, for distress sales are few and far between. Last month, only two of the30 properties on two auction lists were court-ordered sales.

A one-storey JTC detached factory with a three-storey office annex along Gul Road was sold for $3 million, 14.3 per cent less than the $3.5 million asking price.

The situation could change in the coming months, with more distressed sales coming on board.

“But these will only come when there is no choice,” said Mr Colin Tan, research director from Chesterton Suntec International.

Mr Nicholas Mak, Knight Frank’s director of research and consultancy, agreed. But he added that banks here might not rush into home foreclosures. “Banks don’t want to send unintended signals,” he told Today. “There’s no joy for banks to force a family out of their home.

“Banks would want to help clients restructure their losses so that they don’t have to resort to foreclosures, which would hurt their relationship with their clients.”
Posted by Richard Yeo at 6:02 AM No comments:

LONDON - BRITISH house prices rose unexpectedly in January for the first time in nearly a year amid signs that the property market may be beginning to stabilise, the country's biggest mortgage lender said on Thursday.

Halifax said house prices increased 1.9 per cent in January from the previous month. That offset December's 1.6 per cent decline and is the first monthly rise in house prices since February 2008's modest 0.1 per cent increase.

The monthly increase was unexpected, with most analysts predicting a decline of around 1 per cent.

Halifax's findings for January also stand at odds with other surveys into the housing market. Last week, the Nationwide building society said house prices fell a monthly 1.3 per cent in January.

Though Halifax, which is now part of the Lloyds Banking Group, stressed it is important not to place too much weight on one month's figures, it did say that there were some 'very early' signs that market activity may be stabilising, albeit at a low level.

'Nonetheless, continuing pressure on incomes, rising unemployment and the negative impact of the dislocation of the financial markets on the availability of mortgage finance are expected to mean that 2009 will be a difficult year for the housing market,' said Mr Martin Ellis, Halifax's housing economist.

Mr Ellis also noted that during the last British housing crash in the early 1990s, house prices increased for several months during the period.

Despite January's increase, Halifax said the annual fall - measured by the average for the latest three months against the same period a year earlier - swelled to 17.2 per cent in January from 16.2 per cent the month before. -- AP
Posted by Richard Yeo at 6:00 AM No comments:

HOUSING Board flats in Jurong West saw significant price rises last year.
A study by property firm ERA has found resale prices of Housing Board flats there appreciated faster than those in other suburban towns such as Tampines and Woodlands.

More home buyers have flocked to the town, which used to conjure up images of sprawling factories and sleepy suburbia, because of the Jurong Lake District masterplan which intends to transform the town into a vibrant place. -- ST FILE PHOTO

More home seekers have flocked to Jurong West because of the Government's Jurong Lake District masterplan which involves a major upgrade to the area.

The ERA study compared the median prices of resale flats in the first quarter and the fourth quarter of last year.

It showed that the median three-room resale flat prices in Jurong West rose by 19.4 per cent or $34,000 last year, compared with 12.3 per cent in Tampines and 15.7 per cent in Woodlands.

Prices of five-room flats rose the least, at 9.4 per cent, similar to Woodlands but still way above the modest 1.3 per cent rise in Tampines.

The bigger executive flats may be less popular these days, but in Jurong West last year, resale prices rose by 16 per cent, compared with 4.9 per cent in Tampines and 6.2 per cent in Woodlands.

The town, which used to conjure up unappealing images of sprawling factories and sleepy suburbia, is to be transformed into a vibrant place to live, work and play over the next 10 to 15 years.

The plan for Jurong Lake District includes turning the area around Jurong East MRT station into a commercial hub.

Prices of resale flats in Jurong East are generally higher than in Jurong West.

ERA and another property agency PropNex are marketing the 99-year leasehold condo, which is targeted at HDB upgraders.

It is located within the Jurong Lake District and will be the largest launch so far this year.

Developers generally did not want to launch their projects ahead of the Jan 22 Budget and the Chinese New Year celebrations, given the already poor sentiment.

Still, Frasers Centrepoint had been aiming to launch Caspian after Chinese New Year.

Sales start today with a staff preview. The public preview starts on Saturday, with 250 units available at an average price of $580 per sq ft.

The chief operating officer of Frasers Centrepoint Homes, Mr Cheang Kok Kheong, said in the statement that feedback and analysis of their pre-sales surveys had confirmed pent-up demand.

'We have received strong interest from prospective owner-occupiers and even investors, who are now more keen to invest in brick-and-mortar property than risky financial instruments, especially if the property has a great potential upside to it.'

Another mass-market condo near Lakeside MRT station is The Lakeshore, which had seen the values of its units rise substantially since its 2003 launch and is reportedly selling at around $750 psf.
Posted by Richard Yeo at 5:55 AM No comments: 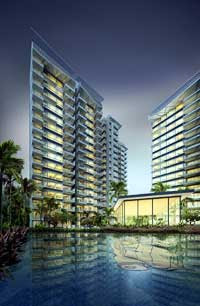