Investors, end-users eye good value in prices, which are almost half their peaks last year.

HONG Kong's office market is showing signs of life again, after almost a year in the doldrums.

About 120 office sale transactions were registered in March, representing a rise of more than 80 per cent from the previous month and the highest level in six months, according to data from Knight Frank. End-users and long-term investors are entering the market again, eyeing good value in prices that have fallen almost 50 per cent from their peaks in 2008.

FURTHER SLIDE AHEAD - The prevailing trend of corporate downsizing and cost rationalisation will cause rents and capital values to fall further in Hong Kong over the next 12 months, says Colliers International

Also in March, the average price of Grade A offices in Hong Kong increased 1.8 per cent month on month, after having fallen for 12 consecutive months.

While prices in Wan Chai and Causeway Bay stabilised, a mild recovery in prices was seen in other business districts. Sheung Wan led the market with a price gain of 3.6 per cent, followed by 3.1 per cent in Central and 1.8 per cent in Admiralty.

'The prices of several office buildings in core areas staged a strong rebound over the month,' Knight Frank observed in a report. 'For instance, a mid-floor unit and a low-floor unit in Lippo Centre in Admiralty were reportedly sold for HK$8,900 (S$1,685) and HK$8,700 per square foot (psf), representing a rise of 15.6 per cent and 13 per cent respectively from the previous month.' 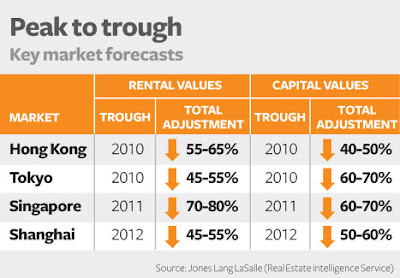 The increase in the sales could have been helped by bank financing being more easily available in the market in Q1 2009, as compared to the last few quarters of 2008.

In a recent market bulletin, Colliers International noted that one key hurdle for investors was the availability of bank loans. However, the market can expect to see an improvement soon as the local banks in China have recently become more active in offering financial packages. Bank valuations are gradually getting closer to asking prices in the market.

However, while transactions might have picked up, most analysts do not have hopes that the capital values and rentals of office space will recover. The problem, said one observer, is not just the current economic situation. Even if Hong Kong's economy starts to recover, the market will still face a problem of oversupply. The same holds true for Singapore.

Singapore and Hong Kong continued to suffer the sharpest declines among all Asian markets in Q1. According to data from CB Richard Ellis (CBRE), Singapore saw an 18.6 per cent drop in office rents while in Hong Kong, overall office rents declined by 14 per cent quarter on quarter.

For Hong Kong, the prevailing trend of corporate downsizing and cost rationalisation will cause rents and capital values to fall further over the next 12 months, Colliers said.

Noted CBRE in its Q1 market view research note: 'A number of hedge funds in Hong Kong were observed to be considering subleasing and surrender options during the quarter, while landlords remained under significant pressure to lower rents even further.'

And although bank financing is becoming more readily available in Hong Kong, as far as prospective investors are concerned, the yield spread between real estate investment yields and banks' lending rates continued to expand in Q1 2009 - signifying that investors had factored in a thicker risk premium in their bids.

Despite the fact that the three-month Hong Kong Interbank Offered Rates (Hibor) - the commonly used benchmark for borrowing rates - fell further by more than 100 basis points in Q1 2009, real estate investment yields in the office and industrial property market in fact edged up more than 50 basis points during the quarter.

However, Colliers advises that long-term investors could still consider investing in prime office buildings in Central/ Admiralty, given that the prices for strata-title office space there have decreased by about 45 per cent from the peak price of HK$26,112 psf in July 2008.

The other investment opportunity is in development sites. 'Since land owners bear no income with their bare sites, they see certain pressure to sell and many will be open to price negotiation,' Colliers said.
Posted by Richard Yeo at 11:58 PM No comments:

DEVELOPERS are riding the wave of buying interest to launch more units.

Some of the 100 units released yesterday were the remainder from an earlier launch.

According to Urban Redevelopment Authority (URA) records, CapitaLand introduced 80 units to the market in July last year and sold 24 until September that year at median prices above $1,500 psf.

The Wharf Residence is expected to receive its temporary occupation permit in 2013. CapitaLand is offering buyers a package deal of stamp duty absorption and interest absorption. BT understands that those who do not take up this package may get to pay up to 8 per cent less.

CapitaLand could make more units available today as the launch stretches into the weekend.

The release of more units at The Wharf Residence comes as activity in the higher end of the property market is starting to stir. According to URA's April statistics, buyers snapped up 64 units out of 75 launched at Bukit Sembawang Estates' Verdure at Holland Road. The median price of the transactions was $1,416 psf.

And even if prices have not bottomed, they believe that there is probably 'no harm in going in now, rather than letting money sit in the bank'. Some buyers are also worried about missing out on a real estate recovery, he said.

Separately, Frasers Centrepoint mentioned at its results briefing last week that it will launch its Woodleigh project in July or August this year. Prices will be at a level that 'the market will accept', said its chief executive, Lim Ee Seng.

The company's Caspian at Lakeside has seen strong take-up since its launch in February. Of the 712 units in the development, 611 had been sold as at May 7, Frasers Centrepoint said.
Posted by Richard Yeo at 11:56 PM No comments:

Sales in core central region get big boost in April, soaring to 19-month high of 322 units

THE high-end property market - which has remained subdued since the beginning of the year even as activity increased in the mass-market segment - started to move in April. 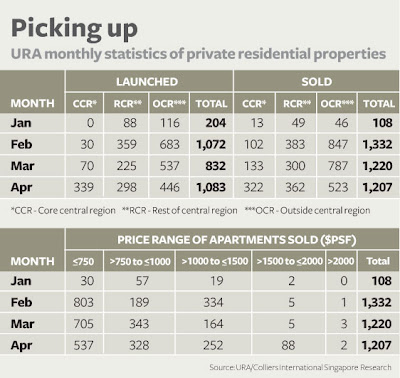 According to data from the Urban Redevelopment Authority (URA), some 1,207 units were sold by developers last month. And unlike in the first three months of the year, homes in Singapore's core central region (CCR) - which includes the prime District 9, Marina Bay and Sentosa - sold as well, with transaction volumes there soaring to a 19-month high of 322 units. In contrast, only 133 homes were sold in the CCR in March.

This rebound is an encouraging sign that the high-end market is not totally void of life as feared, analysts said. Outside the CCR, some 523 homes were also sold in the mass-market outside central region in April, as well as 362 homes in the more upmarket rest of central region.

Buoyed by the performance of the mass market over two consecutive months in February and March, developers started testing the ground with launches in the mid-tier and high-end segments in April.

While just 70 units were launched in the CCR in March, the number rose almost five times to 339 units in April - the highest number since September 2007. Launches in the CCR accounted for almost one-third of all units launched in the month.

'Developers were probably hoping to ride on the rebound in buying momentum to clear their stock and land bank,' said Tay Huey Ying, director for research and advisory at Colliers International.

Colliers' analysis showed that there was a significant jump in the number of new units sold in April in the range of $1,500 per square foot (psf) and above. Some 90 units were sold at above $1,500 psf in April, compared to less than 12 units a month in the preceding six months. Of note, Illuminaire on Devonshire sold all of its 72 newly launched units at a median price of $1,703 psf.

However, there was still no activity in the luxury segment. April marked the fourth consecutive month with no units transacted above $2,500 psf, pointed out Nicholas Mak, Knight Frank's director of consultancy & research. 'Although the sale volume is showing signs of increase, price growth is still subdued,' Mr Mak said.

Analysts said there could be a variety of reasons why the buying momentum carried on from February and March. Some 1,332 homes were sold in February, and another 1,220 in March - a huge pick-up in sales volume after just 108 homes were sold in January.

Talk that the United States and Singapore economies are recovering, combined with the recent stockmarket rally, could have injected confidence and lifted the sentiments of potential buyers, analysts said.

There is also an increasing sense among potential homebuyers that home prices could be nearing bottom, with URA's statistics showing that private home prices chalked up their worst-ever quarterly decline of 14.1 per cent in Q1.

Developer sales for the January-April period are already about 90 per cent of all developer sales in 2008. Such launch and sales activity can be sustainable in the months ahead if the Singapore economy and employment market were to expand in 2009, said Knight Frank's Mr Mak.

Priya Sengupta, associate director of Savills' research & consultancy unit, warned, however, that in the coming months, cautiousness is the key in developer launches as any sign of 'false euphoria' may scare the buyer away, leading to several months of inactivity again.

Others similarly called for 'cautious optimism'.

There is still enough pent-up demand from homebuyers for a few more months, said Chua Yang Liang, Jones Lang LaSalle's head of research for South-east Asia. But he added: 'However, until there is a clear signal of a stabilisation and underlying positive growth in the real economy, the residual pent-up demand alone cannot be expected to lift the residential market in the long term.'
Posted by Richard Yeo at 11:54 PM No comments:

蔡炎亮博士认为，过去三个月的旺热需求应该能够持续下去，不过条件是楼价和房贷配套必须继续保持吸引力。他也相信，经济必须出现明确的稳定和复苏迹象，否则单单靠积压的需求量，将不足以带动整个楼市的长期走势。
Posted by Richard Yeo at 12:09 AM No comments: