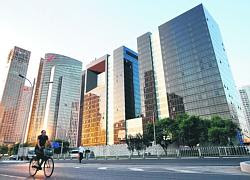 HOT PROPERTY - Residential property prices in Beijing's Central Business District rose 6.5 per cent in the past week and demand for second-hand houses in some other areas is four times the supply, said the China Daily

Residential property prices in Beijing's Central Business District rose 6.5 per cent in the past week and demand for second-hand houses in some other areas is four times the supply, said the China Daily, citing brokerage Homelink.

It said that a land parcel in Beijing, which was withdrawn from a public tender due to a lack of bidders only 15 months ago, was auctioned off on Monday for a record US$585 million.

'The bidders have gone irrational. A bubble in Beijing's property market is definitely there,' Pan Shiyi, one of the bidders that day and chairman of leading developer Soho China, said after the auction, according to the report.

In Shanghai, developers of the luxury Tomson Rivers apartments, priced at over US$14,600 per square metre, sold at least 10 units in June, the report said.

That compared with sales of only four units since the project was marketed four years ago, it added.

In the southern city of Guangzhou, the downtown housing price reached US$1,600 per square metre in May, close to the record high of US$1,700 in October 2007, the report said.

'One thing we are concerned about is whether there is a new bubble being shaped,' the report quoted Gu Yunchang, secretary general of the China Real Estate Association as saying. 'The possibility of a bubble is pretty big.'

China's house prices have been rising fast in recent years with the country's economic boom.

The trend accelerated in 2006 and 2007, partly spurred by a growing stock market that prompted investors to place their windfalls in property.

As a result, the average home price in Beijing was 23 times a local family's average income in 2007, compared with levels of four to six times average incomes internationally, state media reported.

Fearing the property market would suddenly collapse, Beijing launched a number of measures from September 2007 to curb speculation, including raising downpayments on second homes and banning loans to developers for land purchases.

The policies affected the industry severely, causing sales to slump and house prices to drop in dozens of major cities.

However, the financial crisis has forced authorities to relax the curbs, with local governments relying on preferential policies to boost demand.

Stamp tax on property purchases and value-added tax of land on property sales was lifted from November 2008 and minimum deposits for first-time home buyers was also slashed. -- AFP
Posted by Richard Yeo at 11:43 PM No comments:

RETAIL rents continued to fall in the second quarter of 2009 amid economic contraction and new supply, according to a report released yesterday by DTZ Research.

However, rents in 'other city areas' fell more in Q2 than Q1, partly due to new supply that will be completed in the second half of 2009. Prime first-storey rents declined 3.1 per cent to $25.40 psf pm in Q2, more than the previous quarter's fall of 2.2 per cent. 1.3 million sq ft or 56 per cent of new retail space that will be completed in the rest of the year will be in 'other city areas', DTZ estimates.

Anna Lee, associate director of retail at DTZ, said that many retailers and F&B operators have delayed expansion plans or changed their business strategies because of the economic downturn. Some F&B operators have or are considering moving to business parks, where rents are much lower and there is a considerable worker catchment to tap on, she added.

Looking forward, the retail sector will remain under pressure this year because of the downturn in visitor arrivals and the economic contraction, said Chua Chor Hoon, head of DTZ South-east Asia research. 'Orchard/Scotts Road and other city areas will be more affected due to substantial new supply,' Ms Chua said.

Other analysts likewise expect retail rents to keep falling this year, with the prime Orchard/ Scotts Road area tipped to be worst hit.

Macquarie Research, for example, said in a June 15 report that it expects prime Orchard Road rents to fall 10-15 per cent this year given new supply coming on stream. For suburban retail rents, a smaller 5-10 per cent year-on-year fall is expected.

David Lawrence is, however, bearish on Singapore office market.

WHEELOCK Properties (Singapore) CEO David Lawrence is sanguine about the island's residential market and predicts the luxury segment will be 'doing very well within two years'. 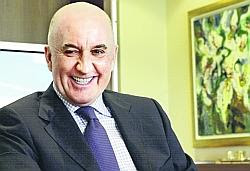 'You're not going to make money buying office buildings...My guess is the best way forward for Singapore is to have a reasonably low-cost office sector to attract financial businesses to Singapore.' -- David Lawrence on the importance of keeping Singapore office rents competitive

But he is bearish on the office sector. 'I don't know what the policy is, but if I were running the Urban Redevelopment Authority, I would make sure I kept releasing land so that office rents are reasonable and more financial companies relocate to Singapore,' Mr Lawrence said in a recent interview with BT. 'So you're not going to make money buying office buildings now,' he quipped.

Mr Lawrence, who has a track record of astute property investments, is a chartered surveyor by training. He formerly headed Richard Ellis International in Singapore and Indonesia, and was a founding director of the company's Thai office.

On Singapore's residential sector, he said: 'The mass and mid segments are doing well at the moment. Quality property is the best long-term hedge against inflation. And inflation is definitely going to come in a few years, whether you like it or not, whether governments like it or not.'

Low interest rates are also spurring home sales in the mass and mid-market segments, Mr Lawrence said. 'The banks have woken up and started lending. They're not being so ridiculously unrealistic about valuations. They are quite keen to lend to the lower to mid-end of the market at the moment.'

The luxury market is starting to move, but not in such a big way. 'Sub-sale prices are going up,' he said. 'Although there is a bit of over-supply, actually buyers are very focused on certain developers and certain projects. A lot of the supply, people aren't interested in really because it isn't good investment-quality product.

'New entrants into the market who are not developers, like the contractors, for example', will just have to reduce their prices, he pronounced. BT understands that luxury residential developers are starting to see a trickle of sales above $3,000 per sq ft - after a hiatus of more than six months.

Another factor that is helping to draw home buyers again is 'a lack of trust in international banks and the financial instruments they are trying to sell', Mr Lawrence said. As well, the weaker Singapore dollar is making direct property investment attractive for overseas buyers. And there's a shortage of investment-grade stock in all sectors.

Mr Lawrence notes there haven't been any large distressed asset sales, due to the generally low gearing of major property companies.

Singapore's reputation as a well-governed and safe place to live is also a strong pull for foreign buyers. It emerged as the 18th most liveable city in a recent ranking of the 25 most liveable cities by the magazine Monocle. It was the only tropical financial centre in the list, Mr Lawrence said.

On his bearish take on the office market, he said: '(Minister for National Development) Mah Bow Tan has managed supply and demand for the office market well in the past 10 years, but everything went up a bit crazy in the past two years and office rents got too high for the long-term development of Singapore as a financial centre.

'The current crisis has brought rents down to a more reasonable level. My guess is the best way forward for Singapore is to have a reasonably low-cost office sector to attract financial businesses. The government has prepared a lot of infrastructure, land, ready to expand the office market, particularly in the Marina Bay area. The land should be released on a regular basis so we don't get any more spikes in office rents.'

Grade A office rents here doubled in 2007, but have fallen about 45 per cent since peaking in Q3 last year.

A policy of keeping office rents competitive will create spin-offs for the residential sector 'because you get more companies coming in to lease or buy' homes, Mr Lawrence said.

As well, the opening of new offices in Singapore, with an increase in the population, will help generate more sales for retailers and ameliorate the effects of over-supply in the retail property market arising from the completion of new malls.
Posted by Richard Yeo at 11:39 PM No comments:

THE average price of freehold non-landed resale private homes in prime districts 9, 10 and 11 increased 11.3 per cent to $1,247 per sq foot in the second quarter from Q1, says DTZ.

Two-bedroom units posted a 12.8 per cent q-on-q gain in Q2, as their lower quantum prices stimulated interest among people hoping to own prime district property.

But DTZ considers the Q2 price gain a blip supported by buyers' fears of missing the bottom, pent-up demand and low interest rates - rather than economic fundamentals.

As for primary market sales, the property firm is now projecting that developers' private home sales for the whole of 2009 are likely to surpass the 11,147 units achieved in 2006, which was the second-highest performance after the 14,811 homes they sold in 2007.

Outside the prime districts, the average resale price of 99-year leasehold homes rose 3.2 per cent q-o-q to $573 psf in Q2, as prices had fallen less and there are fewer 'specu-vestors' in this segment.

Despite DTZ's figures showing an increase in resale prices of non-landed homes in Q2, DTZ's head of South-east Asia Research Chua Chor Hoon said: 'Without a clear recovery in sight for the US and Singapore economies, the price recovery in Q2 2009 is not sustainable and sales volume would be affected if prices continue to rise.'

The number of caveats lodged for resales and sub-sales in April and May this year exceeded that for the whole of Q1 by 70 per cent. The proportion of foreign buyers, excluding Singapore permanent residents, rose from 5 per cent in Q1 to 8 per cent in April and May.

Indonesians and Malaysians accounted for 49 per cent of caveats lodged in April and May by foreigners and Singapore PRs, compared with 40 per cent in Q1.

Meanwhile, as new supply came on stream amid waning demand, rents continued to fall in Q2, although at a slower pace than in Q1. 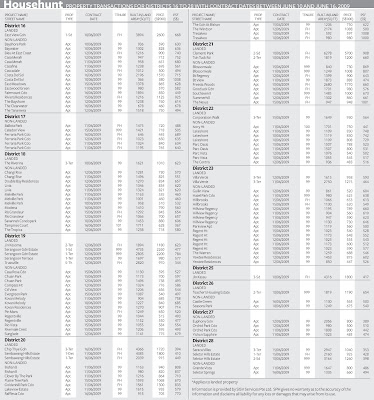 THE Ministry of Trade and Industry (MTI) said on Thursday it will continue to suspend the confirmed list for its industrial government land sales (GLS) programme for the second half of 2009. 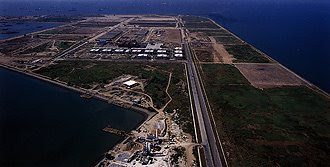 This will provide flexibility for the market to 'adjust supply in accordance with the current economic conditions' said MTI in a statement.

But to meet potential demand for industrial land, MTI has put three new sites on its reserve list.

Under the reserve list system, a site is only offered for public tender if the government receives an application from a developer who commits to bid for the site at a price which is deemed acceptable.

All three sites have a lease of 60 years and are estimated to become available in the last quarter of this year.

Analaysts say MTI's announcement was not surprising given the uncertain economic climate, but noted that interest was stirring in the industrial sector.

More sites may be triggered for tender by year end, they added.

In total, the reserve list for the second half of the year comprises nine sites with a total site area of 19 ha, said MTI.
Posted by Richard Yeo at 11:29 PM No comments:

戴德梁行发现，今年第二季，买家不但购买新推出的单位，二手市场的交易也非常活跃。外国人也开始进场，今年第一季只有大约5％的新私宅单位是外国人购买的，4月和5月的外国买家比率却提高至8％。印尼人和马来西亚人仍然是最大的外国买家，占了将近五成的外国购买力量。
Posted by Richard Yeo at 11:18 PM No comments: