THE date is March 2011. From an elevated viewing platform at Punggol Point, residents are looking out onto tranquil waters, and strolling along a sandy beach while enjoying the sea breeze. 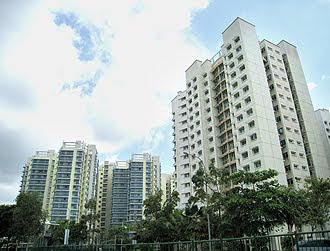 It has so far offered about 6,500 new flats in Punggol since it unveiled grand plans for the former fishing village to become the only waterfront public housing project in August 2007. -- PHOTO: NP

Along a 4.9 kilometre promenade which begins here, they can also access playgrounds, fitness corners, fishing spots and even a horse riding school, flanked by eateries on this route which are set alight when the sun sets.

With this ground-breaking, 'we are one step closer to realising the vision of Punggol as a beautiful waterfront town with an array of leisure opportunities,' said Deputy Prime Minister Prime Minister Teo Chee Hean yesterday at the ceremony. 'We're all very excited by... the developments.'

He noted that fresh plans for the walkway, released by the Urban Redevelopment Authority yesterday, had integrated feedback from residents such as including fitness corners along the route.

This walkway is part of a 150km 'round-island route' which will allow users walk, cycle, or jog around the whole island eventually - connecting Singaporeans 'not only psychologically, but physically', added Mr Teo.

Developments in Punggol have accelerated in the last two years since Prime Minister Lee Hsien Loong offered a new vision for it - called Punggol 21-plus - in his 2007 National Day Rally speech.

It has not always been smooth sailing for Punggol, which more than 10 years ago had a population of only 500. The vision for its transformation began as early as 1996, when it was announced by then-prime minister Goh Chok Tong.

Read the full story in The Sunday Times.
Posted by Richard Yeo at 5:57 AM No comments:

More Lights Up At Iluma

New Bugis mall is 90% leased and is seeing more shoppers.

ILUMA may not have opened its doors with a bang, but it has been working to fill space and draw crowds since. The new mall in Victoria Street is now 90 per cent occupied and more shoppers are making their way there, says its management. 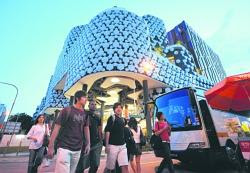 Traffic has 'definitely improved' in the past few months, says Han Minli, business development director at Jack Investment, which owns and manages Iluma.

Iluma entered the mall scene in March as Filmgarde Cineplex began operations. Retailers gradually opened for business in the following months. But what seemed to stand out in the mall's early days was empty space and a lack of crowds, going by reports.

Jack Investment is counting on the situation to improve as more tenants strut their stuff. 'I think we will really see the surge in (shopper) numbers when the mall is fully ready. That will probably be the end of the year,' says Ms Han.

So far, 10 per cent of space at Iluma - concentrated on the first and second floors - is left.

There was opportunity to fill it but Jack Investment is waiting for the 'right' tenants to come, Ms Han says. Rents at the mall range from the 'high-tens' to 'forty-ish' dollars per square feet.

The mall is looking for unique retailers - many of those already in business are start-ups and may have made their first foray into a commercial shopping centre, she adds. 'We are being a little bit more experimental.'

Besides having more tenants, the completion of a link bridge from Bugis Junction at the end of the year may drive more shoppers to Iluma, says Ms Han. There will also be retail space on the 53-metre bridge, with a net rentable area of around 3,800 sq ft.

Around 60 per cent of the space has been taken up by retailers such as comic and accessory shops, and rents there range from the mid-$20s to around $50 psf.

Singapore's retail scene has become more interesting of late with the entrance of more new malls. Besides Iluma, Orchard Central and Ion Orchard have opened, even as the economy contracts and visitor numbers fall.

Iluma is taking the competition in its stride, explains Ms Han. 'The key opportunity for us is that we are not in a very densely populated shopping belt with a lot of new competition. So that allows us to create our own niche.'

She also notes that the Bugis area has a 'sizeable' population of students, working executives and visitors to nearby museums.

Iluma has a crystal mesh media facade touted as one of the world's biggest permanent media facades. It can be used as a canvas for advertisements or for media artists to exhibit their works. The mall will be showcasing the facade's technical capabilities at a lighting preview today.
Posted by Richard Yeo at 5:51 AM No comments: