CEL Development is launching the remaining units of its Oasis @ Elias condominium at Pasir Ris on Saturday. 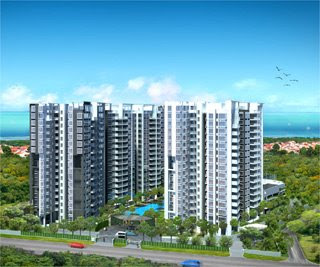 Half of the 142 units previewed have been sold, at an average price of S$670 per square foot.

The units that have been sold included six of nine penthouses in the property.

Marketing agent CB Richard Ellis said HDB upgraders made up 80 per cent of the buyers.

The recently launched 8 @ Woodleigh condominium at Potong Pasir was fully sold within two weeks, while Vista Residences in Balestier has also seen a strong take-up rate for the units launched so far.

Oasis @ Elias is a 99-year leasehold property, and comprises six blocks of two to five-room apartments. - CNA/yt
Posted by Richard Yeo at 12:17 AM No comments:

PRIVATE home prices slowed their downward slide in the second quarter, with suburban homes helping to hold up the market.

The Urban Redevelopment Authority (URA) announced yesterday that its initial estimates showed a 5.9 per cent fall in private home prices from April to last month, following a record 14.1 per cent slide in the first quarter. 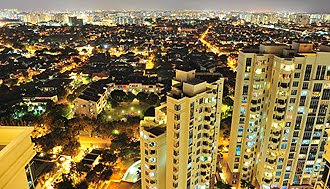 Prices of non-landed homes in the suburban areas fell just 2.6 per cent in the second quarter, compared with a bigger 6.6 per cent slide in city-centre prices and a 6.3 per cent decline in city-fringe prices. -- ST PHOTO: ALPHONSUS CHERN

Some property experts yesterday expressed surprise at the larger-than-expected drop. And with the recent strong demand, they are expecting to see a much smaller fall in four weeks' time, when final second-quarter figures are released.

A few are even expecting to see a small price rise by then because of last month's buying craze, which saw project launches attracting rising numbers of investors and speculators.

But given that the current frenzy is being whipped up against a still-weak economic backdrop, more analysts are turning cautious, saying it is unsustainable.

Yesterday, the URA reported prices of non-landed homes in the suburban areas falling just 2.6 per cent in the second quarter, compared with a bigger 6.6 per cent slide in city-centre prices and a 6.3 per cent decline in city-fringe prices.

The smaller mass-market price fall reflected the strong buying support from upgraders in the HDB market, where resale prices reversed a marginal fall to rise by 1.2 per cent in the second quarter.

The stock market rally, coupled with strong liquidity, has resulted in a surge in second-quarter new home sales. CBRE Research estimated that 4,000 new homes were sold - more than 50 per cent above the 2,596 units sold in the first quarter.

The volume lent support to home prices and, in some cases, allowed developers to raise their prices when supply was tight, it said.

The second quarter also saw more new launches at higher price levels because they were located either on the city fringe or in prime districts, CBRE Research added. These include Martin Place Residences, The Wharf Residence, One Devonshire and the sold-out 8@Woodleigh.

CBRE Research executive director Li Hiaw Ho said the 5.9 per cent decline in private home prices is 'contrary to the present market perception' as actual price levels in the second quarter are known to have risen more than 10 per cent from the first quarter.

DTZ head of South-east Asia research Chua Chor Hoon described the fall as 'surprising' because prices picked up around last month - especially in the prime districts of 9, 10 and 11.

Average home prices were still relatively flat in April and May - some developments saw price increases, while others saw price falls - she said. But last month, resale home prices rose from 3 per cent in the mass-market segment to as much as 11 per cent in prime areas, she added.

'Going forward, developers are likely to test the market with gradual price increases. Should the current momentum hold, we can expect private property prices to increase by 5 per cent to 8 per cent in the second half of the year,' said ERA Asia-Pacific associate director Eugene Lim.

While local buyers are now supporting the market, more foreign investors may come when the integrated resorts open, he added.

Colliers International director for research and advisory Tay Huey Ying thinks the strength of pent-up demand should not be underestimated as new home sales had sunk to a low of 4,264 units last year - half of the annual average of about 8,500 new units since 2000.

Home sales could remain robust in the second half of this year, possibly reaching 12,000 units or more. This will hinge on price rises not exceeding 5 per cent for mass-market homes and 10 per cent for higher-tier homes, as buyers remain price sensitive in view of the absence of economic expansion and growth in employment and personal income, she said.

Others, like Ms Chua, think the final second-quarter index may already show some increase when more June caveats are included in the computation of the index. But she thinks this could be a 'temporary blip' with resistance setting in at some levels and prices possibly stagnant or falling from as early as the the third quarter onwards.
Posted by Richard Yeo at 12:11 AM No comments:

A Softer Slide In Private Home Prices In Q2

URA flash estimates show 5.9% fall but many expect final showing to be better

Singapore's private home prices fell for a fourth straight quarter in Q2 2009 - but the marked slowdown in the rate of decline shows that the residential market here is recovering, analysts said.

The private residential price index fell 5.9 per cent in the second quarter, according to flash estimates from the Urban Redevelopment Authority (URA) yesterday. By contrast, the index fell 14.1 per cent in Q1. 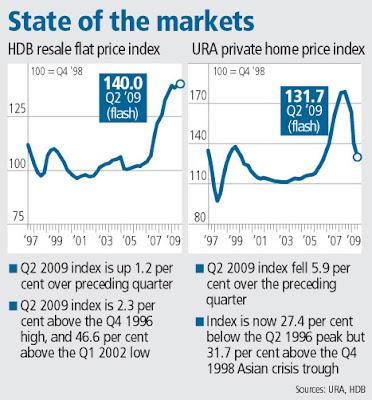 The continuing fall in the index caught many analysts by surprise, as anecdotal evidence showed that private home prices started climbing again in the second quarter.

'The decline is surprising as prices have picked up in the latter part of the second quarter, especially in the prime districts of 9, 10 and 11,' said DTZ's head of South-east Asia research Chua Chor Hoon.

Echoed Li Hiaw Ho, executive director of CBRE Research: 'This smaller decline in the price index is contrary to the present market perception where actual price levels in the second quarter were known to be more than 10 per cent above those in the first quarter.'

DTZ's Ms Chua pointed out that URA's flash estimates are based on transaction prices from caveats lodged during the first ten weeks of the quarter, while the buying frenzy gained pace in June. 'I expect the final price index to fall less or show some increase when more caveats in June are included in the computation of the index,' she said.

A URA spokesman said that while some developers had started raising prices recently, the extent of price increase quarter-on-quarter was small and pertained to selected projects.

The revised index (which will be out on July 24) will capture caveats beyond the first 10 weeks of the quarter.

Meanwhile, the slower pace of decline for private home prices was seen across the whole island.

The improved sentiment was also evident in the resale prices of Housing and Development Board (HDB) flats.

ERA, which says it has a 45 per cent market share of the HDB resale market, observed that its transaction volume surged some 52 per cent in Q2 over Q1.

Buyers are returning to the HDB market because sellers have become more realistic about asking prices - especially those selling five-room and executive flats, analysts said. Rather than holding out for higher cash-over-valuation (COV) amounts, most are now willing to sell at valuation or with a slight COV.

Analysts expect the property market recovery to continue - but cautioned against over-exuberance.

OCBC Investment Research analyst Foo Sze Ming said that property prices in Singapore are unlikely to surge to 2007 levels, even with the current recovery.

Then, prices were boosted by global real estate funds that bought up homes here for investment. 'Since the economic crisis is still ongoing, I doubt that there will be that much interest from funds in the Singapore property market to drive prices up to 2007 levels this year,' Mr Foo said.

'We retain our cautious outlook for the Singapore residential market,' said Nomura analysts Tony Darwell and Min Chow Sai in a June 29 report.

'In our view, the directional trend in the market will be driven by the competing forces of inventory clearance and buyers motivated by current 'value' rather than expectations of a sustained recovery in asset prices.'

The analysts see the likelihood of a W-shaped recovery in asset prices, rather than their previous expectations of a U-shaped recovery, the note said.
Posted by Richard Yeo at 12:04 AM No comments:

Singapore's government said on Thursday it will continue to suspend the sale of land on its 'confirmed list' in the second half of 2009 due to economic uncertainties.

The government did, however, add three sites to its 'reserve list', increasing the number of land parcels that may be sold to nine from six.

Singapore will only release a site on its 'reserve list' for sale if an interested party submits an application for the site at a price that is acceptable to the government. -- REUTERS
Posted by Richard Yeo at 12:02 AM No comments:

Property Transactions For Districts 1 To 15 With Contract Dates Between June 10th - 16th, 2009 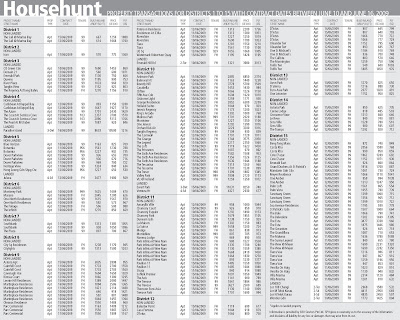