These days, even with the property market in the doldrums, it is almost impossible to buy a condominium for less than $500 per sq ft (psf).

Almost impossible, that is, except in Geylang. 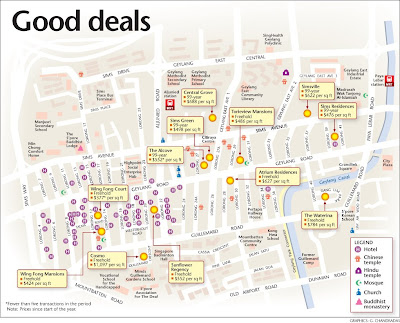 To the ordinary homebuyer, it is not hard to see why. Even on a weekday afternoon, the red-light district is peppered with young girls wearing skin-tight skirts and the men who crowd around them.

Temples on one side of the road face dimly lit terrace houses with blatantly displayed 'open' signs on the other. Famous food outlets are tucked between rows of cheap, rundown hotels.

But get past the sleaze and you will find some of Singapore's best condo buys lining the streets off Geylang Road. Many are freehold and a handful, such as Atrium Residences, are even brand new.

Properties come at a song partly because of the area's still-squalid reputation, and partly because some banks do not offer loans to buy homes in Geylang, agents say.

But savvy buyers with cash in hand, or who are willing to pay the higher interest rates offered by some financing firms, can often pick up a good deal, they add. Firms that offer loans for Geylang properties include Hong Leong Finance and Singapura Finance.

'Many buyers are open-minded enough to know that there is a lot of investment potential in the area. Geylang is near the city, but even cheaper than the heartland,' said Ms Natalie Maia Indra, an agent with DTZ Debenham Tie Leung, who has been selling homes in the area for almost a year.

The low prices mean that rental yields, calculated by dividing a property's total rents for a year over its purchase price, can 'easily hit 7 per cent', especially for the newer properties. This compares with an average of 2 per cent to 4 per cent for most homes in Singapore.

Geylang is also drawing more interest from homebuyers these days because of its growing reputation as a bona fide food paradise. This has not only helped Singaporeans get a taste of the more savoury parts of the red-light district, but also spawned foodie crowds that make the area feel less dangerous.

Of course, even within Geylang, not all properties are equal. The traditional wisdom is that odd-numbered lorongs are 'safe', while even-numbered ones are shunned.

A better guide, however, is that the area above Lorong 25 is generally quieter. Below that, a large cluster of cheap hotels and coffee shops gives rise to ribald revelry that often continues into the wee hours of the morning.

The more popular homes are those further removed from Geylang Road: nearer Aljunied MRT Station to the north, and around Guillemard Road to the south. These areas are favoured by big-name developers such as CapitaLand and Far East Organization, which jointly developed Central Grove near Aljunied MRT Station.

Between desirable streets and less preferred ones, prices can differ markedly.

Along Lorong 20, the newly completed Sunflower Regency is fetching around $550 psf. Down the road, Cosmo in Guillemard Crescent, lying just outside Geylang proper, was sold out at an average price of about $1,100 psf when it was launched in April.

A few streets west of that, Wing Fong Court and Wing Fong Mansions are hovering at about $400 psf. They are located at the heart of seedy Geylang, where the streets are dirty, the buildings old, and the noise of raucous foodies extends late into the night.

Still, potential buyers such as entrepreneur Sebastian Lim, 27, are not deterred by such details.

'Geylang properties are really cheap and I think they will appreciate in time because the area is not too far from town,' he said.
Posted by Richard Yeo at 7:50 PM No comments:

FOR those waiting to snap up a public flat in the iconic 50-storey integrated housing development, the good news: Some 428 four- and five-room units at The Pinnacle@Duxton are among 992 available under the Housing and Development Board’s (HDB) latest balloting exercise launched on Friday. 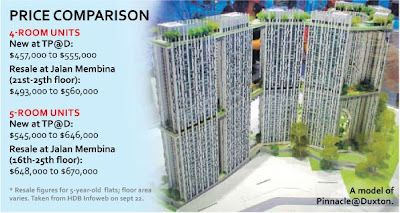 Even so, the board pointed out, these new flats which come with the HDB discount are priced lower than what resale units in the area have recently sold for. Resale HDB prices have been climbing, showing a4.4-per-cent growth in the second quarter.

The Pinnacle@Duxton is based on an award-winning design, and boasts special features such as skybridges and sky gardens at the 26th and 50th storeys. Apartments will be provided with a varied combination of balconies, bay windows and planter boxes, to suit the preferences of flat buyers.