UOL Group and Kheng Leong sold about 70 units of their new Simei condominium Double Bay Residences over the past weekend - fewer than what it was aiming for, sources said.

UOL said last Friday after it sold over 80 units on the first day of the project's soft launch that it expected to sell at least 200 units in all by the end of the weekend.

But so far, the developers have sold about 150 apartments in the 646-unit project.

Sources also said that prices are higher than what the developers had previously quoted.

The companies said last Friday that units in the 99-year leasehold development will be sold for $600-650 per square foot (psf). However, BT understands that most of the units sold so far are either smaller apartments, and/or apartments on the higher floors - which means that they were sold for higher than average prices. For example, a one-bedroom apartment in the development sold for more than $800 psf, BT understands.

UOL and Kheng Leong released 250 units during the soft launch over the weekend, and hundreds of people turned up at the showroom in Simei. The project will be officially launched on Saturday.

One market observer said that the two developers could be pricing units higher to ensure a respectable profit margin. UOL and Kheng Leong paid some $296 psf per plot ratio for the site in January 2008.

Elsewhere, boutique developer Hiap Hoe Group has sold just a few units of its 118-unit The Beverly at Toh Tuck Road since the project was soft-launched at the end of February.

The units sold for an average price of $730-$740 psf, BT understands. Hiap Hoe released just 31 units in the project, and is aiming to sell enough homes to start construction.
Posted by Richard Yeo at 12:12 AM No comments:

As prices drop sharply from peak, investors may return to pick up bargains

The entire 32nd floor of Suntec City Tower 1 has been sold for about $1,300 per square foot of strata area, which is about 40 per cent lower than what strata floors in the development were fetching about seven or eight months ago. BT understands the buyer is a Hong Kong investment company. 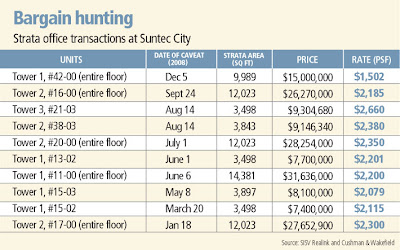 The seller is understood to be an entity linked to a German company that had bought the property for about $1,180 psf or $15 million in June 2006 - just as prices were starting to climb. They have come a full circle since then.

Cushman & Wakefield brokered the latest sale, which involves a lump-sum price of $16.5 million for the floor that has a strata area of about 12,712 sq ft.

Prices of office space at Suntec City - a Grade A strata office haunt - have been slipping steadily in recent months. A December 2008 transaction of the entire 42nd floor in Suntec Tower 1 took place at $1,502 psf.

'If you look at transactions of office floors at Suntec City, say about 12 months ago, or even just seven/eight months ago, they were going at above $2,000 psf; now they are below $1,500 psf. So that's a huge discount,' observed Cushman & Wakefield managing director Donald Han.

It also presents attractive value to some potential investors, although strata office transactions on the whole have slowed to a trickle amid the generally weak property investment sales climate and the tight credit market.

'Things are a lot different from two years ago when rents were escalating. Then, you'd find buyers looking to own their premises instead of being at the mercy of landlords and upward rental revisions. Today, the priority for companies is cash preservation and buyers are looking at the right price before taking a position. There are still some investors hoping to buy strata offices for their own occupation. But there are also pure investors hoping to fish at the bottom of the cycle,' Mr Han said.

Some of those willing to sell their strata offices now may be trying to capitalise on opportunities such as acquiring new businesses, said Mr Han.

DTZ's senior director for investment advisory services Shaun Poh said that foreign companies with a presence in Singapore are among those interested in buying strata office floors. 'Some of them may need say only 3,000 to 4,000 sq ft premises, but are willing to pick up an entire floor of say 11,000 to 12,000 sq ft at Suntec City (and lease out the rest of the space). So it's a case of buying for their own use mixed with an investment flavour,' he said. And if there's a chance of prices coming down another 10-15 per cent, they are prepared to wait it out.

Cushman's Mr Han recalls that during last year's market peak, strata office investors were eyeing units with either vacant possession or with leases expiring soon. They wanted to ride on higher rental rates that would come with new or renewed leases.

'But with office rents slowing down quickly today, you'd probably want a unit with a lease committed during the peak last year and with another two years to go,' Mr Han said.

Grade A office rents peaked in Q3 last year. According to CB Richard Ellis data, the average gross monthly rental value for Grade A office space in Singapore slipped 20.2 per cent in Q4 last year from the preceding quarter, resulting in a full-year decline in 2008 of 12.5 per cent. This was in sharp contrast to the 96.4 per cent jump seen in 2007.
Posted by Richard Yeo at 12:09 AM No comments: