Paya Lebar was one of Singapore's earliest commercial hubs, but it now stands neglected and underdeveloped, with the Singapore Post Centre building its sole marker of modernisation.

Within the next 15 years, however, all that will change. 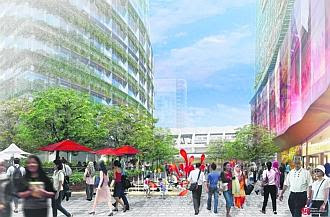 The Paya Lebar Station Plaza, seen here as an artist's impression, is part of the Government's draft masterplan to position the area into a fringe hub along the lines of Novena and Buona Vista. -- PHOTO: URA

The neighbourhood around the Paya Lebar MRT station is slated for a major makeover as part of the Government's recently unveiled draft masterplan.

It will be transformed into Paya Lebar Central, a suburban commercial node nestled between the city centre and the bustling Tampines commercial hub. 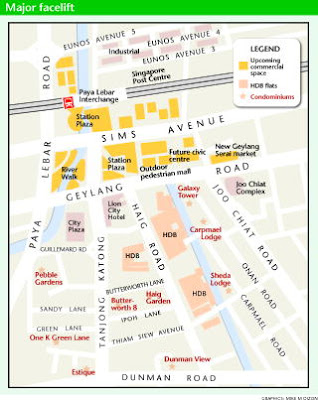 About 12ha of land around Sims Avenue and Geylang Road will be put up for development, yielding some 5.4 million sq ft of commercial space.

More than half of this space has been earmarked for offices. The rest will be for shops and hotels with about 1,400 rooms.

While Paya Lebar will be positioned as a fringe hub along the lines of Novena and Buona Vista, the area's traditional local Malay character will add a unique flavour.

Apart from the new commercial buildings, some upcoming developments include landscaped public spaces around the cleaned-up Geylang River, a pedestrian mall along Geylang Road, and a new plaza square and civic centre next to the rebuilt Geylang Serai Market.

'It has the potential to become as successful as Novena,' he said at the masterplan's launch last month.

But what does this all mean for potential investors and current owners of Paya Lebar properties?

Property consultants say it is a bit premature to predict any trend in property values right now or even in the next few years.

Over time, however, starting from about five years from now, properties in the area will almost definitely become more valuable, they add.

'The plans to improve Paya Lebar will have a long-term impact on the properties around the area,' he said. 'The first thing that comes to mind is that the commercial assets will benefit from the increased activity once things start to take shape.'

There are limited avenues for small-time investors to take advantage of, though, as there are not that many strata-titled commercial properties in the immediate area. The few that exist include City Plaza.

Dr Chua said, however, some properties in the nearby Geylang area might enjoy a spillover effect. Prices and rents of office and shop units there, such as coffee shops, have been on the rise recently.

As for residential developments, there are currently no plans for new housing sites in Paya Lebar. This, however, may prove a boon to existing homes in the area.

Their prices and rentals are expected to rise, as the critical mass of workers that will flow into the commercial hub look for homes nearby to buy or rent, consultants say.

Currently, there are few major projects in the vicinity. Most apartment blocks are boutique developments around Guillemard Road, Guillemard Crescent, Sims Avenue, Haig Road and Geylang.

Prices differ widely, depending on the area, according to CBRE, citing data from the Urban Redevelopment Authority.

CBRE's analysis show some recent launches, such as Esta Ruby in Guillemard Road and Cosmo in Guillemard Crescent, have commanded prices well above $1,000 per sq ft (psf).

Latest transactions for nearby developments along Haig Road, such as Butterworth 8 and Haig Garden, have fetched prices hovering around $1,000 psf.

Others, such as Sunflower Regency in Lorong 20 Geylang, are hovering at between $500 psf and $600 psf.

The same trends can be seen for completed projects. Homes in Geylang proper - including those in Sims Green, The Sunny Spring, Wing Fong Mansions, The Waterina and Aston Mansions - have been transacted recently at well below $600 psf.

On the other hand, homes in Geylang East, in projects such as Simsville and Central Grove, have been sold for $600 to $900 psf.

Le Crescendo, one of the rare condominiums along Paya Lebar Road, is fetching between $800 psf and $1,000 psf for its newly completed units.

As for public housing, prices for a three-room flat in the Geylang town range from $170,000 to $300,000, according to sales in the last three months. Prices are lower in estates along Paya Lebar Way, Eunos Crescent, Balam Road and Circuit Road, and higher in Haig Road and Aljunied Crescent.

Within the next 15 years, about 12ha of land in Paya Lebar will be put up for development around Sims Avenue and Geylang Road, which will yield some 5.4 million sq ft of commercial space.
Posted by Richard Yeo at 12:48 PM No comments: