WHEN 31-year-old Farrer Court is demolished over the coming months, its replacement will be a “curvaceous” condominium that is set to dominate the skyline ofDistrict 10 and clock several firsts. 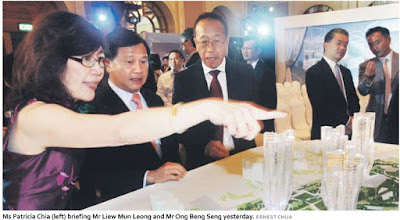 Giving the media a sneak peek yesterday, a CapitaLand-led consortium gave hints of how it planned to transform the site of Singapore’s biggest-ever en bloc sale.

In a precinct made up largely of landed homes and low- to mid-rise buildings, the upcoming 99-year leasehold project will comprise seven towers, which willeach reach a height of 36 storeys. There will be a total of1,500 homes, including 32 penthouses and 12 garden villas.

The condominium, yet to be named, will be launched in the first half of next year and is estimated to cost $3 billion to build, said CapitaLand Group chief executive Liew Mun Leong. The breakeven price ranges from $1,350 to $1,450 per square foot.

Unite pricing will be set closer to the launch, “but it will be affordable and we can make money”, said Mr Liew. He was confident that the project would find takers as en bloc sellers still need homes.

He said: “I am not worried about the economic downturn in the United States. Business must still go on.”

Behind the Farrer design is Pritzker ArchitecturePrize-winner Zaha Hadid, the first woman to clinch the architecture world’s equivalent of the Nobel Prize and the one who drafted the masterplan for the Buona Vista science hub, one-north. This will be her first condominium contract here. 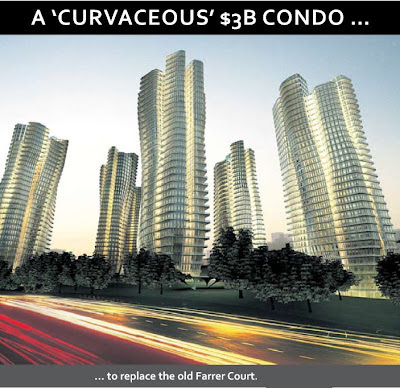 “Zaha is very famous for her ‘sensuous architectural silhouettes’, whatever that means,” straight-talking Mr Liew said to laughter all round. “It just means curves to me.”

Later at the briefing, Mr Liew again had the audience in stitches when he replied to a question on how the consortium persuaded Ms Zaha to take up the job.

“It started with Mr Ong Beng Seng having a relationship — I mean ...” Mr Liew paused abruptly as the room erupted with laughter. “... Having a good working relationship with Ms Zaha, because all these require personal relationships.”

Mr Ong heads Hotel Properties Limited (HPL), which is the number-two shareholder of the consortium after CapitaLand.

Mr Liew was addressing business partners, lawyers and senior executives from the 10 banks that have sewn up a loan of $1.996 billion, the largest ever syndicated residential property development loan arranged here.

The funds will be used to cover some of the construction costs — which are estimated to total $3 billion — and to partly finance the cost of the site, which has a maximum gross floor area of 2.35 million square feet.

It was the biggest collective sale in local history and made 618 homeowners instant millionaires, as each unit fetched an average of $2.15 million.

The en bloc sellers of Farrer Court will be invited to a preview of the new condominium. “But there will be no special price for them,” said CapitaLand Residential Singapore chief Patricia Chia.
Posted by Richard Yeo at 6:07 PM No comments:

IT IS a situation that may apply to some en bloc deals: The selling price could have been higher if the sales committee or its agent had tried harder to secure a better deal.

In the case of Horizon Towers, a potential buyer was even standing by with a higher price than the one that was eventually chosen.

But that cannot be reason enough to disallow an en bloc sale, according to Justice Choo Han Teck as he brought a protracted saga to an end.

In a landmark decision, the judge set out the role of the Strata Titles Board as well as which of its findings can be challenged, and which ones cannot.

When it comes to price, as long as the STB finds that a purchase price is fair, which would make it a “finding of fact” in legal parlance, it would have fulfilled its duty and is entitled to approve an en bloc sale.

Minority residents at Horizon Towers who argued that the $500-million sale to Horizon Partners Private Limited (HPPL) was done in bad faith — as evidenced by Vineyard Holdings’ higher offer of $510 million :— had failed to prove their case.

Justice Choo found “no error of law” and said the High Court “cannot and will not” interfere in findings of fact made by the STB.

“Whether it was the right time to sell, or that the sales committee ought to have made a little more effort to persuade the purchaser to offer more, are not crucial matters that oblige the STB to withhold approval.

“Nor would it be the concern of the STB that some, or all, of the appellants might have consented had the Vineyard offer been made known to all of them,” he said.

If the STB were to make such enquiries, it “would never get its job done within the time limited”.

The minority owners had appealed to reverse a Dec 7 decision by STB to approve the sale. But if residents believe that the sales committee had “deliberately or negligently” not pursued a higher offer, resulting in a financial loss to them, the recourse is through litigation in the courts, said Justice Choo.

“It is necessary for this point to be made, not to encourage further litigation, but to emphasise that a subsidiary proprietor who does not wish to sell his unit can only object to the en bloc sale on such grounds as the relevant statutes allow,” he said.

And, the statutes do not allow the STB to deal with “allegations and counter-allegations against parties” as its tribunal hearing does not give such parties “the full recourse of trial to defend themselves”.

He concluded that all sides were treated fairly in this deal as “fairness requires only that the rules and regulations of each en bloc deal to be properly and duly administered”.
Posted by Richard Yeo at 6:04 PM No comments:

SINGAPORE'S third condo-style public housing project is about to go on sale, this time in the heart of bustling Ang Mo Kio.

The project is located at Ang Mo Kio Street 52, which is flanked by Ang Mo Kio Avenue 3 and Avenue 5 and within walking distance of the Ang Mo Kio MRT station. 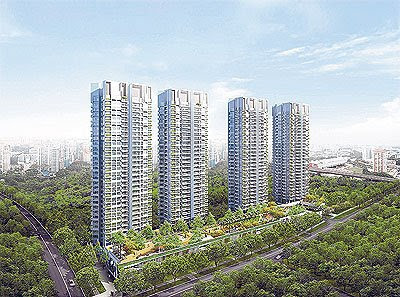 LIVING IN STYLE: The Park Central development will boast amenities like barbecue pits and jogging path on the roof-top garden above the carpark. -- ARTIST'S IMPRESSION: COURTESY OF UNITED ENGINEERS

The prices for Park Central @AMK are about 10 per cent below the last such project, City View@Boon Keng, launched early this year. Sales there were slow amid some concerns that prices were too high.

Developer United Engineers (UE), through its unit Greatearth Developments, is launching the 578-unit Park Central project for sale on Wednesday.

It aims to take advantage of the small window before the Hungry Ghost month starts in early August when some home hunters are wary of buying.

The developer will also put in barbecue pits and a 400m jogging path on the roof-top garden above the carpark, allowing for more privacy, though these are public areas.

UE won the Park Central site in a tender last November at $212 per sq ft of potential gross floor area. It is the third project under under the Housing Board's Design, Build and Sell Scheme (DBSS).

In such projects, private developers set the price of the flats but are bound by general public housing rules. For instance, they can sell their flats only to households earning not more than $8,000 a month.

Because of this restriction, the project's price seems a little high, said Chesterton International's head of research and consultancy, Mr Colin Tan. 'But the interest will be strong as Ang Mo Kio is one of Singapore's largest housing estates.

'People tend to buy in areas they know or have lived in. With a little clever marketing, enough people may be persuaded to really stretch themselves and part with their hard-earned money.'

The first DBSS project, The Premiere@Tampines, met with an overwhelming response when it was launched at the end of 2006. But demand at City View@Boon Keng, which was priced over 50 per cent more than The Premiere, was slower. Some buyers felt the prices - the five-room units cost $536,000 to $727,000 - were too high.

The fourth DBSS project, in Bishan, could come to market at the end of the year.
Posted by Richard Yeo at 6:00 PM No comments:

It has 'condo-style' fittings and finishes, & expects a sell-out

UE acquired the Housing and Development Board site in November 2007 and based on the $212.40 per sq ft per plot ratio (psf ppr) it paid, property consultants estimated the launch price could be around $580 psf.

The actual price, revealed yesterday by UE, is lower than the reported average price of $520 psf for another DBSS project, City View @ Boon Keng, launched earlier this year.

UE did not comment on its pricing strategy but said Park Central @ AMK will comprise four 30-storey towers with a total of 578 four and five-room units.

With 'condominium-style' fittings and finishes, four-room units are not expected to cost more than $400,000, while five-room units will be under $600,000.

PropNex CEO Mohamed Ismail said the project is, 'competitively priced'. 'I am glad the developer has priced it sensitively.'

Mr Ismail said that when City View @ Boon Keng was launched there was, 'some resistance' to the pricing.

Savills Singapore director (marketing and business development) Ku Swee Yong agrees that Central Park @ AMK is attractively priced. He believes UE could be looking at a slim profit margin, given a breakeven price of around $400 psf.

Increasing construction costs, which he estimates at between $200-$250 psf, could also weigh in.

Still, a sell-out development would be good for overall market sentiment, he said.

Mr Lim said that five-room flats in the area, which are at least five years old, are going for around $400,000.

Still, the response from buyers is unlikely to reach the fever pitch experienced at the launch of the first DBSS development in late 2006. Then, almost 6,000 people applied for 616 units at Premiere @ Tampines. But those units were going for around $300 psf.
Posted by Richard Yeo at 5:58 PM No comments: 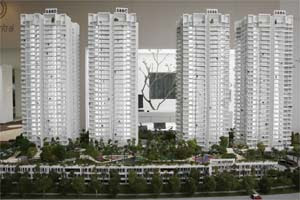 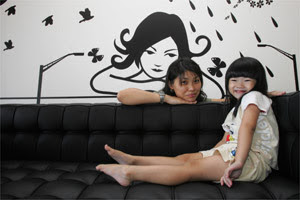 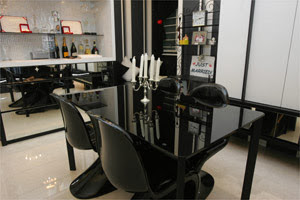 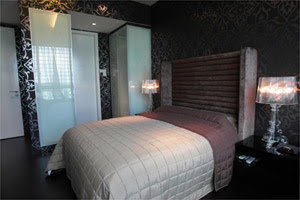 小寒不迷信，当初这个单位门牌有两个“4”字，她都不介意。住进来后连续发生屋子漏水、墙裂事件，跟着摔伤脚，又在台湾金曲奖落马，她都没有怪罪风水。这个本地第一个入围金曲奖最佳作词的才女，还要在这个家写出更多的好词呢！
Posted by Richard Yeo at 5:37 PM No comments: