As the property market heads into a down cycle, there will be more and more completed condominium developments with unsold units.

At the end of the third quarter, the number of unsold units in completed non-landed developments stood at 759, up from 461 a year ago. 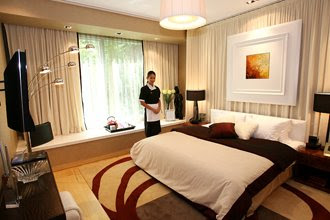 Among the completed condos with new units still available are the St Regis Residences Singapore (left) and the Rafflesia (next picture). -- PHOTOS: BT FILE 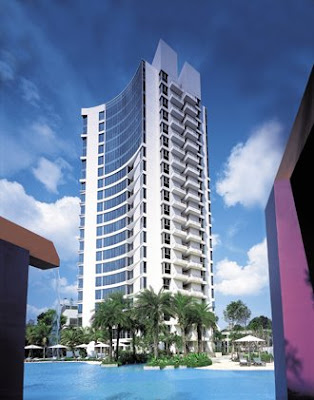 'This number may increase given the weak homebuying sentiment which is expected to persist,' said Knight Frank director of research and consultancy Nicholas Mak.

Buyers can buy these unsold units directly from the developers.

Although most of the projects targeted for completion next year received a good take-up rate during the good years in 2006 and last year, some of them would have been sold at high prices.

'Some buyers who have stretched their financial limits and bought multiple units may sell these units on the resale market, so potential buyers will have more choices,' said Mr Mak.

For example at The Sea View, a recently completed condo near the bustling Parkway Parade mall, there are unoccupied high-floor units going for $930 per sq ft (psf). Caveats filed this year showed that deals had been done at $1,000 psf and above.

The advantage of completed homes is that they offer immediate occupation, be it for owner-occupiers or for investors looking for immediate rental returns.

Retiree Khin May Myint, 69, who bought a 1,200 sq ft unit in the 99-year leasehold Lakeshore at $920 psf in October, said: 'We feel more secure buying directly from developers as everything is new and in good condition.'

The price she paid was much higher than when the development was first put up for sale at $460 psf in late 2003.

She paid close to resale prices, she said, but the developer had more units for buyers to choose from.

A potential buyer who declined to be named said: 'I like new units because they have no history. I am sure there are other superstitious buyers out there who do not like to buy a home that has been occupied and gives off bad vibes.'

On top of the new projects, there are also older developments with unsold units.

The 230-unit Rafflesia condo, opposite Raffles Institution in Bishan, received its temporary occupation permit in 2003 but still has several vacant units. Caveats lodged for the 99-year leasehold condo this year showed that deals were mostly done below $900 psf, not far from its launch price of $750 psf to $800 psf back in 2000.

Developer Far East Organization is offering the new units at $900 psf, but they come with a guaranteed 4-per-cent annual rental yield for three years and a one-year warranty on defects. The 12-month liability period for defects usually comes only with new condos.

Some developers may lease out unsold units before selling them. Such units would be good for those looking for instant rental yield, said property experts.

But those looking to move into new apartments should check if the units had been leased out previously, they said.

Mr Mak said some developers of completed projects may lower the prices of unsold units while others may have a policy of not lowering prices.

Still, as competition increases, some projects may be re-priced, he said.
Posted by Richard Yeo at 9:59 PM No comments: