APPROVAL for an enbloc sale by owners of Laguna Park apartments crossed the 80 per cent threshold on Friday, Channel News Asia reported yesterday. This allows the owners of the 30-year-old condominium to proceed to market the site, which has a total land area of about 667,000 sq ft.

The asking price is $1.2 billion - or $1.8 million to $2.3 million per unit, down from the more than $3 million some owners were hoping for last year.

The move to sell started in early 2007 but hit a snag as some residents held back in the hope that the bull market would last, CNA reported. Most of the development's 528 units are between 1,500 and 1,700 square feet.

Figures from property consultancy group CB Richard Ellis released last week show that only seven collective sales worth a total $371 million have been sealed this year, against the record $12.4 billion from 111 transactions in 2007. The collective sales market was dormant this year as developers remained mindful of the lukewarm response to new residential launches, rising construction costs and tighter credit measures, CBRE observed.
Posted by Richard Yeo at 9:44 PM No comments:

Privare Residential Property Sales Up 63% On Month In November

Sales of uncompleted private homes rebounded 63 per cent on month in November, after falling 70 per cent in October. Some 192 new units were sold in November. 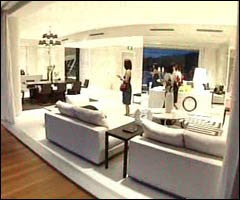 According to analysts, many developers had launched new projects in November after delaying launches in October, in the wake of the global financial crisis.

Among these, 52 per cent were projects in the core central region.

"What is significant in the recent launch trend is that we are actually seeing developers stepping up launches of prime properties. This could indicate the weakening holding power of small or mid-tier developers who are still holding on to prime development sites," said Tay Huey Ying, director of Research & Advisory at Colliers International.

The mass market segment dominated November's sales. Six in 10 units were sold at below S$1,000 per square foot. Mid-tier units priced between S$1,000 psf and S$1,999 psf made up the rest.

Looking ahead, market watchers said prices of private residential properties could fall by an average of 10 to 12 per cent for the whole of 2009. This is partly due to slower demand growth and the fact that property prices went up too quickly in 2007.

Barring more bad news in financial markets, analysts said there could be bright spots ahead for property sales.

Said Ku Swee Yong, director of Marketing & Business Development at Savills: "The banks have been hoarding a lot of Singapore dollars in the past few months as they go conservative and try to improve the balance sheet quality. As such, the inter-bank lending rates have become very low. The 3-month SIBOR rate has been below 1 per cent for the past two to three weeks.

"And the banks might start to come out to offer very attractively priced mortgages in the first two quarters of next year, in order to (seize) market share, especially of good credit, quality customers."

Some observers said sales may slow in December, ranging between 150 and 200 units. This will bring the total sales volume to 4,500 units for 2008, which is about one-third lower than last year. - CNA /yb/ls
Posted by Richard Yeo at 9:37 PM No comments:

S'pore Economy 'Expected To Recover In 2010'

SWISS bank UBS expects Singapore's economy to shrink by 0.5 per cent next year but to bounce back with growth of 4 per cent in 2010.

Its assumption rests on expectations that the United States and Europe stage a moderate recovery at the end of next year.

Mr Thomas Kaegi, senior economist at UBS Wealth Management Research, said that while the US faces its worst recession in 25 years, fiscal and monetary stimulus measures will help offset the sharp decline in private consumption and boost the economy.

'The recovery we forecast for the US in 2010 is not a sharp re-acceleration by historical standards,' said Mr Kaegi at the bank's global outlook briefing last Friday.

There will be a 'bottoming out' in some hard-hit areas of the US economy, such as capital expenditures and commercial real estate spending, while other components will stage only a 'moderate turnaround'.

Mr Kaegi predicted more pain in the near term for Singapore. 'The labour market will deteriorate and this will weigh on consumer spending and investment spending. Next year, we'll see correction in construction spending that has held up quite well,' he said.

He also spoke about the spectre of deflation: 'For Singapore so far, inflation has come off very slowly, much slower than we've expected. However, it might well be that we're going to see some months of negative inflation going into next year.'

Fears of deflation are rising globally, as the economic slowdown and the threat of a deepening recession hit the cost of raw materials.

And it might be worthwhile taking note of deflation, industry watchers say, because it encourages households and companies to delay purchases in anticipation that prices will fall. This, in turn, hurts economic growth. Deflation also makes it more expensive for debtors to pay off their loans.

A Morgan Stanley report said the 'open nature' of Singapore's economy makes it most vulnerable to build-up of slack, and hence lower pricing power.

'In the 1998 and 2001 recessions, when GDP growth was minus 1.4 per cent and minus 2.4 per cent respectively, there were three to four quarters of deflation. We expect negative inflation towards the second half of 2009,' it noted.

Mr Kaegi does not believe Singapore will be entrenched in Japanese-style deflation, where prices were static or falling despite the ultra-low cost of borrowing. Japan's decade-long deflation dented the national appetite for risk and investment.
Posted by Richard Yeo at 9:36 PM No comments:

MADRID - THE International Monetary Fund chief warned on Monday of a global recession but said the world economy could begin to recover in late 2009 or early 2010 after 'a very difficult year.'

'The global outlook will continue to deteriorate,' IMF managing director Dominique Strauss-Kahn said. 'The possibility of global recession is really in front of us.'

He said declining growth in emerging countries such as China would not make up for recessions in developed countries.

'We are facing an unprecedented decline in output and we have evidence of substantial uncertainty limiting the effectiveness of some fiscal policy measures,' he said.

'The most urgent need is a big foot on the accelerator of fiscal expenditure.' He said '2009 will be a very difficult year,' but by 'late 2009, early 2010' the global economy should begin to recover.

The IMF last month forecast that advanced economies would contract next year for the first time since World War II and called for government spending to battle the global financial crisis.

It lowered its global economic growth forecast by 0.8 point to 2.2 per cent. -- AFP
Posted by Richard Yeo at 9:34 PM No comments:

虽然一些经济大国如法国、意大利、德国、韩国、俄罗斯等的第三季数据还未能取得，环球房地产指南预料，这些地方的房价将难逃下跌的厄运。
Posted by Richard Yeo at 9:31 PM No comments: