(WASHINGTON) More Americans unexpectedly signed contracts to purchase previously owned homes in June, a sign that lower prices are drawing some buyers back into the market.

The index of pending home resales rose 5.3 per cent after a revised 4.9 per cent decline in May, the National Association of Realtors said yesterday here. The gain is the third this year.

Plummeting property values, spurred by mounting foreclosures, may be helping to stabilise the market by making houses more affordable.

Still, repossessions may keep growing as stricter lending rules make it harder for owners to refinance their mortgages.

'Home sales have been boosted by the sharp price falls, which have been related to the large number of foreclosed properties,' David Sloan, senior economist at 4Cast Inc in New York, said before the report.

Economists had projected the index would fall one per cent after a previously reported 4.7 per cent decrease in May, according to the median of 37 forecasts in a Bloomberg News survey. Estimates ranged from a drop of 3 per cent to a 3.5 per cent gain.

Pending resales were down 12 per cent from June 2007, yesterday's housing report showed.

The measure last month increased in all four regions of the country from May, led by a 9.3 per cent gain in the South.

'Buyers entering the hardest-hit markets, in some cases with multiple-bid offers, may have put a floor on prices,' Lawrence Yun, the agents' group chief economist, said in a statement.

'In addition, rising commodity prices and higher construction costs have resulted in a very unusual market with existing home prices being less than replacement building costs in some areas.'

The pending resales report is considered a leading indicator because it tracks contract signings.

Closings, which typically occur a month or two later, are tallied in a separate report from the Realtors. -- Bloomberg
Posted by Richard Yeo at 11:16 PM No comments:

Rising construction costs could have made URA award to low bid, some say

The winning bid from HH Properties, a joint-venture between Hiap Hoe and sister company SuperBowl Holdings, was $73.3 million or $172.09 per square foot per plot ratio - significantly below the $350-470 psf ppr that analysts indicated for the site when it was launched in late March. 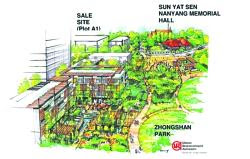 Heritage area: URA said the project will have a strong link with the Sun Yat Sen Nanyang Memorial Hall

This created uncertainty as to whether URA would award the site. Contacted by BT, a URA spokeswoman would not say whether the top bid was below the Chief Valuer's reserve price.

'We are unable to disclose CV's reserve price, which is confidential,' she said. 'However, the Government has assessed that the highest bid is acceptable and has thus awarded the site. We are unable to comment on the details of the evaluation, as they are confidential.'

The tender, which closed on July 16, attracted three bids. Some market watchers suggest that in awarding the site, the authorities may have taken into account how rising construction costs are denting bids.

An industry observer suggested that when a top bid is below the state's reserve price, the chances of a plot being awarded may improve if there are at least three bids.

The award of the Balestier site may also have been motivated by its strategic importance as a catalyst to URA's plans to rejuvenate the area. URA said yesterday that the project on the site will be a 'landmark development that will establish a strong connection with the heritage Sun Yat Sen Nanyang Memorial Hall'.

The Hiap Hoe-Superbowl joint venture will make an all-in investment, including land cost, of about $200-220 million, Teo Ho Beng, managing director of both Hiap Hoe and SuperBowl told BT.

The two listed companies are part of Hiap Hoe Holdings group, which is also involved in the construction business. The group will handle the main contract for the Balestier project.

Mr Teo said that the project marks Hiap Hoe group's first venture into the hotel business, which it hopes will be a new core segment.

The project, slated for completion in about three years, will include two towers.

A hotel with about 500-600 rooms will be in a 25-storey tower, which will also have a four-storey podium with function rooms, restaurants and shops.

The other tower is likely to be 15 storeys and will have offices and small-office, home-office (Soho) units.

'The intention is to strata title and sell the office and Soho units to part finance the development,' Mr Teo said.

The three-star hotel will cater to businessmen and tourists, especially from China and India.

'We will appoint a hotel management company to operate the hotel,' he said.

URA said that Balestier, with its strong heritage value and old world charm, has been designated as one of Singapore's identity nodes since 2002.
Posted by Richard Yeo at 11:13 PM No comments:

DEVELOPMENT property was the key bottom line driver for Fraser & Neave (F&N), which yesterday reported a 14 per cent rise in net profit after exceptionals to $110.3 million for its third quarter ended June 30, 2008. 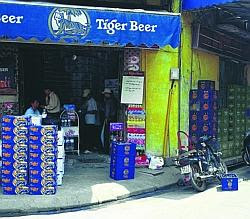 Sterling performance: APB's Indochina cluster continues to lead, with Vietnam, Cambodia and Laos together generating 37 per cent of revenue

This translates to earnings per share of 7.9 cents, against 7 cents a year ago. Without the exceptional items, net profit increased 20 per cent to $115.6 million.

Revenue fell 8 per cent from Q307 to $1.2 billion. The food & beverage (F&B) business was the largest contributor to revenue, at more than 60 per cent.

Property development contributed 60 per cent of the group's net profit before exceptionals.

Besides properties and F&B, F&N has a printing & publishing (P&P) arm. 'Our diversified businesses and wide footprint have helped shield F&N from the direct impact of the credit and liquidity crisis,' Mr Lee said.

F&N announced a management revamp in June. As part of the change, the current CEO of Asia-Pacific Breweries (APB), Koh Poh Tiong, will become CEO of F&N's F&B business on Oct 1. The CEOs of properties, F&B and P&P will report to F&N's board.

'Economic growth in the Asia-Pacific region is expected to be moderate for the next 12 months,' F&N said in its financial statement. It expects its net profit before exceptionals this year to exceed last year's.

F&N's unit APB also reported notable results for the third quarter, with net profit after exceptionals jumping 22 per cent to $37.4 million from a year earlier. Based on this, earnings per share were 14.5 cents in Q3, 2.6 cents higher than a year earlier.

Excluding exceptionals, net profit was $42.5 million, or 34 per cent higher.

APB posted a 9.6 per cent increase in revenue to $472.9 million. Vietnam, Cambodia and Laos together generated 37 per cent of revenue.

'Very satisfactory results were achieved for the third quarter and nine-month period to June 30,' said Mr Koh. 'This positive trend is likely to flow into the remaining fourth quarter. Barring any unforeseen developments, we expect our full-year attributable profit (before exceptional items) to exceed that of last year.'
Posted by Richard Yeo at 11:11 PM No comments:

Marina Bay Sands Rises Out Of Sight To Stay On Track

The lay of the land may still look relatively flat over the Marina Bay Sands site but the integrated resort will open on time.

That is because - away from the limelight - almost 40 per cent of the development is underground and progressing well. Marina Bay Sands says the sub-structure works for the convention centre are well established while superstructure works are well underway and rising above ground.

Sub-structure basement slabs for the casino and theatre are also 'progressing well'. 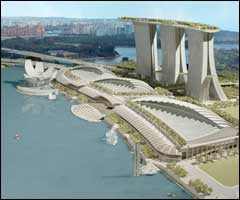 Earlier issues with the reclaimed land subsiding have been ironed out too. 'Marina Bay Sands has the expertise to deal with such conditions based on our experience in Macau, which is also on reclaimed land. In Singapore, we overcame the challenging conditions of reclaimed land through special considerations and complex below-ground work such as long-length diaphragm walls,' explained Marina Bay Sands general manager George Tanasijevich.

Of the three hotel towers, one has been built to the eighth storey with the other two already four storeys high.

Mr Tanasijevich added: 'Admittedly, it is a very aggressive target, but our target remains and we are confident we can hit it for a December 2009 opening.'

The three hotel towers will have around 2,500 rooms and will be run by Marina Bay Sands.

'We have spoken with over 1,000 brands. We have been talking to them for over two years and some have been interested even before we had a floor plan,' Mr Tanasijevich said.

Average rents for units leased are currently at about $50 per square foot per month and Mr Tanasijevich said: 'We do expect to have market-leading rents.'

While specific brands have not been named, Mr Tanasijevich said that it started by looking at luxury fashion, watch and jewellery brands. 'We are in the process of determining what will be the best mix,' he added.

Marina Bays Sands has employed about 300 people directly and its meetings, incentives, conventions and exhibitions (Mice) team is about nine-strong.

The Mice business is important to Marina Bay Sands. Mr Tanasijevich said: 'We are deep in discussion with about 30 expos, and organisers of about 40 meetings and conferences for the opening year up to 2016.'

Saying that he found the rents that retailers were willing to pay 'extraordinary', he added: 'And they certainly indicate that they expect to do a high level of gross volume to justify these high minimum rents.'

'We expect that our mall in Singapore, the Marina Bay Sands, will be considered probably the most successful, the most profitable mall ever,' he added.

Mr Adelson was speaking from Macau, where the Venetian Macau will soon celebrate its first anniversary and also open the Four Seasons Macau together with its world premiere of Cirque du Soleil's Zaia.

The integrated resort (IR) model with gaming and non-gaming offerings is still relatively new in Asia but Las Vegas Sands reported that its Asian entertainer performances - including headliners Jay Chou, Hacken Lee, Easton Chan and Aaron Kwok - have been drawing visitors, with some acts seeing over 100,000 visitors a day.
Posted by Richard Yeo at 11:08 PM No comments:

THE residents of seven blocks in Commonwealth Drive will soon be offered new flats as part of the Housing Board's latest redevelopment exercise.

Under the Selective En-bloc Redevelopment Scheme (Sers), 669 households in the 44-year-old precinct near Tanglin Halt will be relocated to a new site situated just across the road, the HDB announced yesterday.

They will be closer to the Commonwealth MRT station, Tanglin Halt neighbourhood centre and HDB commercial amenities at the adjacent Commonwealth View precinct.

Eligible flat owners will be invited to register for their replacement flats around the third quarter of next year. Construction of the flats are due for completion by early 2013.
Posted by Richard Yeo at 10:46 PM No comments: