世邦魏理仕执行董事李晓和说：“悲观的情绪将继续笼罩市场，2009年第一季的楼市预料也会相当淡静，特别是受到农历新年庆祝活动的干扰。虽然有些发展商正筹备推出一些新项目，但它们相信还是会将注意力集中在清掉已推出的单位上。”
Posted by Richard Yeo at 11:39 AM No comments:

公众对小型组屋反应热烈，组屋推出首天就有574份申请，每间单位平均有3.8人申购。申请截止日期是本月8日。
Posted by Richard Yeo at 11:37 AM No comments:

Some Bargains For House Hunters

Developers cutting prices and offering discounts; some small projects on the way

The property market is off to a quiet start this year, with some developers even closing their show-flats temporarily in response to dwindling crowds. 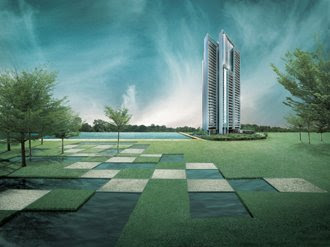 Interested property buyers can look out for three offerings from City Developments - Phase 2 of Livia in Pasir Ris, The Arte (left) in Thomson Road and the Quayside Isle in Sentosa Cove. Projects launched earlier are rolling out discounts and incentives to attract more buyers. -- PHOTO: CITY DEVELOPMENTS

But as home prices continue to fall, house hunters tempted back into the market do have some places to go shopping.

Several small developments are coming on the market, while other projects that have been launched earlier are giving discounts or other buying incentives.

In the Balestier area, developer Roxy Homes is soft-launching two freehold boutique projects this weekend - Nova 48 in Prome Road and Nova 88 in Bhamo Road, both off Balestier Road.

Another upcoming launch is that of Alexis in Alexandra Road. The freehold development has about 300 units and is less than 10 minutes' walk to Queenstown MRT Station, according to property agents.

Indicative prices are about $900 to $1,000 psf, according to agents. The developer is offering a payment scheme similar to deferred payment, where buyers can pay 20 per cent upfront and then nothing until completion.

Closer to town, the Heritage Group is holding private previews for Vivace, a new 999-year leasehold project to be built at the former Tong Watt Mansion near Robertson Quay.

There are also a number of developers that have cut prices or are offering carrots to buyers.

Novelty Group, for instance, has lowered the price of its Lucida project along Thomson Road. The 62-unit development was launched at close to $1,600 psf early last year, but is now selling at about $1,200 psf.

The one-bedroom units are 624 sq ft in size, while two-bedroom apartments are 1,066 sq ft.

In the East Coast, the asking price for Mountbatten Suites has fallen from $1,100 psf at its launch to over $900 psf now. The developer is reportedly offering deferred payment and absorbing stamp and legal fees.

Frasers Centrepoint is also giving renovation vouchers to buyers of its Woodsville 28 project in Potong Pasir. Two-bedroom units come with a $20,000 voucher, while buyers of a three-bedroom unit get $30,000. Prices remain at $850 psf on average for the freehold development.

For the rest of the year, interested buyers can look out for three offerings from City Developments, which is planning to launch Phase 2 of Livia in Pasir Ris, The Arte in Thomson Road, and the Quayside Isle in Sentosa Cove.

While the prices for the last two projects have yet to be finalised, prices start at $797,000 for a three-bedroom apartment at Livia.

Far East Organization is also understood to be planning to launch the latest phase of cluster houses in its Greenwood landed housing development, as well as a new 99-year leasehold project in Choa Chu Kang.
Posted by Richard Yeo at 11:32 AM No comments:

The number of home buyers defaulting on their home loans for three months or more has risen significantly over the last five years.

Figures obtained by The Sunday Times from the Housing Board show that the number of these defaulters has jumped by about 8,000 since the end of 2003.

Also, such defaults have climbed from 5per cent to 8per cent of all HDB home loans.

The figures underscore what seems to be a growing problem. From one in 20 borrowers being in arrears, the proportion is now one in 12.

Parliament was told recently that 33,000 out of 420,000 HDB home loan borrowers were in arrears for more than three months.

On the decreasing number of total HDB loans, market analysts say this is likely due to new rules that took effect on Jan1, 2003, which stated that those upgrading their flats for a second time, as well as all downgraders, must borrow from banks instead of the Housing Board.

HDB loans - which offer a concessionary rate - are available only for first-time buyers or first-time upgraders.

Analysts told The Sunday Times that the increase in defaulters was likely due to the fact that HDB flat prices were 'very much lower in 2003' than they were last year.

'Incomes were also on the rise. During good times, it is possible that some home buyers overstretched in a rising market and may now be in a fix as the economy sinks into recession,' he said.

HDB flat prices enjoyed a spectacular bull run with a 17.4per cent gain in 2007, the strongest growth in a decade.

Property agency PropNex's chief executive officer, Mr Mohamed Ismail, said an increase in affluence and higher costs of living over the last five years could have contributed to the higher incidence of people being in arrears.

Finally, HDB rarely repossesses defaulters' flats, leaving their numbers to accumulate in the system. Some home owners in arrears can take up to a few years to pay off debts.

Still, the number of HDB home owners in trouble is clearly on the rise.

Members of Parliament interviewed confirmed the trend, noting a rise in residents seeking help for home loan problems at their Meet-the- People sessions.

Dr Teo Ho Pin, Mayor of the North West District, MP for Pasir Ris-Punggol GRC Teo Ser Luck and Aljunied GRC MP Cynthia Phua are among those who have noticed the trend.

In many cases, said Dr Teo, home owners were retrenched or had to switch to lower-paying jobs and could not maintain their loan payments.

'A lot of them are coming to me for help to find them jobs,' added Mr Teo.

The MPs pointed out HDB's various assistance measures, such as allowing for the restructuring of loans, postponing payments, and even helping borrowers to downgrade to smaller flats.

The HDB also said it has several comprehensive measures to help such cases.

Banks which give market-rate loans for HDB flat purchases say they have not yet seen a significant increase in the number of defaulters.

Maybank said there had been a slight increase 'but nothing at an alarming rate'.

OCBC and DBS said there had been no significant increase in arrears.

Repossession of their flats is a last resort.

Looking ahead as the recession deepens, MPs said more HDB borrowers will probably have problems paying off their mortgages.

Madam Phua said the limited supply of smaller flat types could become a problem that needs fixing quickly as families start to downgrade.

The HDB is addressing this by beefing up the supply of two- to three-room flats to around 4,000 over the next two years for lower-income families and those home owners who need to downgrade.

These, however, will be ready only in two to three years. 'We'll have to explore other options in helping such default cases in the coming year,' said Madam Phua.

Two years ago, renovation contractor Ting Kah Ping was up to his neck in debt, owing the Housing Board more than $80,000 for his home loan. He was unable to meet the instalments.

Today, the father of four owns a flat without an outstanding loan - and he said it is thanks to the HDB.

Mr Ting, 54, and his wife bought a four-room flat in Tampines in 1998 for $112,800 but started having problems paying the instalments about five years ago.

Work as a renovation contractor was inconsistent and he was unable to service his loans regularly. He approached the HDB for help and it agreed to let him make smaller payments and, for a time, postpone his payments for half a year.

Still, despite his wife taking on part-time jobs while looking after their four children, now aged 11 to 21, they had difficulty paying their debts.

The HDB advised the couple to downgrade their flat and, earlier this year, they sold their home for $303,000. With the money, he bought a three-room home nearby and fully paid up his debt to the HDB.

'I'm just glad the HDB did not force me to give up my flat or take it back. I think banks wouldn't have had as much patience,' Mr Ting said in Mandarin.

He is one of many home owners whom the HDB hopes to help with its various initiatives.

The board will consider allowing them to pay reduced loan instalments on a temporary basis and work out a solution to their financial situation.

Owners can also sublet a room to generate income, or include working family members as joint owners to help pay for the flat.

The board may also consider providing an additional HDB loan to help owners downgrade to a smaller, more affordable unit.
Posted by Richard Yeo at 11:30 AM No comments: