Tender For Phase 3 Of Fusionopolis Will Open By H2

Singapore is seeing an overwhelming demand for research and development space, particularly from the info-communication, media and science sectors.

So to meet the growing need, the government said it will expand the Fusionopolis cluster at one-north. 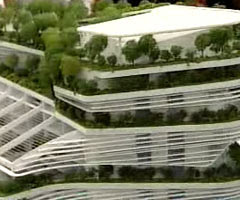 This was revealed at the ground-breaking ceremony of Phase 2B of the development on Friday.

The ground-breaking marks the start of Phase 2B of Fusionopolis. However, further development of the cluster is now projected to grow at a much faster pace.

Philip Su, Assistant CEO, JTC Corporation, said: "In terms of demand from the private sector for space in business park, you'll find that we are presently quite short.

"Even with the ground-breaking of Phase 2B, there is an unfulfilled demand for such space. So, that's the reason why we may have to push forward some of our plans to bring in Phase 3."

An additional 50,000 square metres of Gross Floor Area will be added under Phase 3 and Phase 4. And to meet demand for more business park space, JTC is bringing forward the development of the third phase.

It will open Phase 3 for tender by the private sector by the second half of this year.

Speaking at the ground-breaking, Trade and Industry Minister Lim Hng Kiang noted that Fusionopolis plays a key role in building up a knowledge-based economy in Singapore.

Mr Lim said: "The Fusionopolis cluster, together with the other developments in one-north, will help to anchor high-value economic activities and contribute to the development of Singapore as a knowledge-intensive economy."

When ready, the 15-storey building will house R&D labs for the infocomm, media, science and engineering industries. As part of the Fusionopolis cluster, it is expected to set the stage for more public-private partnerships.

With Fusionopolis Phases 1 and 2A previously attaining full occupancy even before completion, Phase 2B is expected to receive similar responses.

Low Soon Sim, Executive Director, Soilbuild, said: "There has been quite a bit of interest, and at this point in time, we are focusing on their design requirements."

Mainboard-listed Soilbuild is the developer for Phase 2B - the first private developer in the Fusionopolis cluster. Construction for Phase 2B is expected to be completed by 2010. - CNA/ms
Posted by Richard Yeo at 5:31 AM No comments: