(WASHINGTON) Former Fed chairman Alan Greenspan said the decline in the US housing market may be bottoming and it's 'very easy to see' financial markets continuing to improve.

'We are finally beginning to see the seeds of a bottoming' in the housing industry, Mr Greenspan said on Tuesday during a conference of the National Association of Realtors in Washington. The US is 'at the edge of a major liquidation' in the stock of unsold properties, which may help to stabilise prices, he said.

Home-sales figures in recent weeks have shown a slower pace of decline, and the slide in property prices has eased, according to gauges including the S&P/Case-Shiller index.

The former Fed chief, who was among the first prominent economists to warn about the risk of a recession in 2007, said housing prices could fall another 5 per cent without putting too much strain on the economy. 'We run into trouble if it's very significantly more than that,'Mr Greenspan said. Housing prices remain 'the critical Achilles' heel' of the economy.

While the housing bottom may not be obvious in prices, it is becoming clear in 'significant regional differences,' where some of the hardest-hit areas are starting to show signs of improvement, he said.

Mr Greenspan said in congressional testimony in October that 'a flaw' in his free-market ideology contributed to the 'once-in- a-century' credit crisis.

Today, Mr Greenspan said companies are having less trouble raising money. US firms have sold bonds at a record pace so far this year, including a US$3.75 billion offering from Microsoft on Tuesday. Wells Fargo and Morgan Stanley raised US$16.6 billion in stock and bond sales on May 8.

'Company after company has been raising capital and they are getting far more than they expected,' said Mr Greenspan, 83, who left the Fed in January 2006 after almost two decades at the helm and has returned to his former role as a private economic forecaster.

With the expansion in market liquidity, 'you begin to see, as we are seeing today, a very significant rise in the availability of money,' Mr Greenspan said. As markets improve, 'it's very easy to see that it's going to continue for an indefinite period,' he said.

US home prices fell the most on record during the first quarter from the prior year as banks sold seized homes and foreclosures persisted at a high rate in California and Florida. The median US housing price fell 14 per cent during the quarter to US$169,000 year- over-year, the National Association of Realtors said.

US banks held US$26.6 billion of repossessed real estate at the end of 2008, more than doubling from a year earlier, according to the Federal Deposit Insurance Corp in Washington.

Mr Greenspan's decisions as a central banker have come under scrutiny in recent years after the fall in home prices triggered a collapse in mortgage financing and other credit.

Under Mr Greenspan's leadership, the Fed left the overnight lending rate between banks at one per cent from June 2003 until June 2004. Regional Fed presidents such as Gary Stern of Minneapolis and Janet Yellen of San Francisco have publicly questioned the Fed's hands-off approach toward asset bubbles like the one that emerged in house prices during Mr Greenspan's tenure. -- Bloomberg
Posted by Richard Yeo at 11:48 PM No comments: 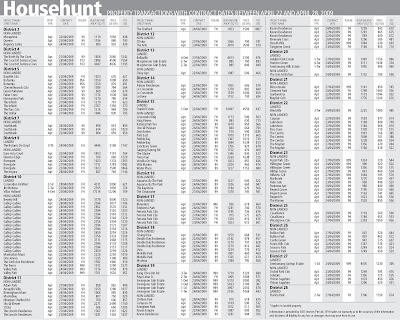 (HONG KONG) The brother of a Hong Kong property and gambling tycoon has paid the second-highest per square foot (psf) price on record for a shop in the city, hoping to benefit from an influx of mainland Chinese visitors. 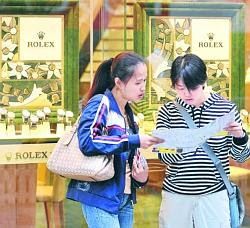 Comparing prices: Rents for retail shops in Hong Kong dropped 20per cent between October and February and may have reached bottom

'There's a lack of supply in the area as most of the shops are in malls that are owned by Wharf (Holdings) Ltd,' Mr Lo said.

Mr Yeung, Midland's client, is the brother of Albert Yeung, he said.

The street-level shop is near Wharf's Harbour City, one of Hong Kong's biggest shopping centres, and the Star Ferry pier in Kowloon.

The mall and Wharf's Times Square in Causeway Bay on Hong Kong island account for 10 per cent of the city's retail sales, Wharf deputy chairman Stephen Ng said in March.

Rents for retail shops in Hong Kong dropped 20 per cent between October and February and may have reached bottom as more mainland Chinese visit, Wong Leung-sing, an associate director at Centaline Property Agency Ltd, said yesterday. The price of leases has risen by 2 per cent since February, he said.

Mr Yeung, who sees the shop as a long-term investment, hopes to rent it for more than HK$200,000 a month, double current prices, when it becomes vacant in July, providing a rental yield of 4.5 per cent, Mr Lo said.

The sale was reported earlier by the South China Morning Post.

The number of Hong Kong office and retail-space real estate transactions has risen to the highest since August last month, climbing 27 per cent from a month earlier to 648, the Wen Wei Po newspaper reported last week.

LONDON - NEW data released on Thursday provided further signs of a pickup in the British housing market, with a survey showing that the number of new mortgages jumped by 29 per cent in March.

The Council of Mortgage Lenders said that a total of 31,000 mortgages were advanced during the month for people buying a property - up from 24,000 in February - although the figure was still 33 per cent lower than March last year.

There was also a rise in the number of people buying their first home, with 12,500 first-time buyers taking out a mortgage during the month, accounting for 40 per cent of all loans, the highest proportion since April 2005.

The figures add to growing evidence that activity in the housing market has passed its low point.

Earlier this week the Royal Institution of Chartered Surveyors said inquiries from potential buyers rose at their fastest pace in almost a decade during April.

But analysts have stressed caution, pointing out that activity is still very low by long-term norms.

Bob Pannell, head of research at the Council of Mortgage Lenders said that there was a sharp dividing line in the housing market between those potential buyers who can afford a substantial deposit and those who cannot as tight lending restrictions line up against a record low official interest rate of 0.5 per cent.

'For those who can, the burden of debt payments is low and mortgage interest is consuming proportionately less income than for a number of years,' he said. 'But for those without substantial deposits, entering the market is still both difficult and uncertain. While there are some signs of demand increasing, house prices remain weak and lending criteria inevitably remain inherently conservative as lenders necessarily seek to rebuild their capital position.'

The lender said that it would make all its fixed rate mortgages available to people borrowing up to 70 per cent of their home's value, rather than restricting them to those with at least a 40 per cent deposit, as had previously been the case. -- AP
Posted by Richard Yeo at 11:40 PM No comments:

SING Holdings is launching its latest residential development, BelleRive, this weekend at indicative prices of between $1,325 and $1,464 per sq ft. The listed developer is also extending an interest absorption scheme to all buyers. 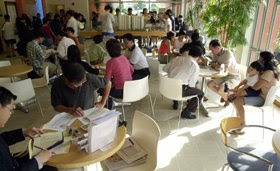 BelleRive, located off Bukit Timah Road between Balmoral and Robin roads, is a 15-storey apartment tower with a total of 51 units. Its two and three-bedroom units range from 958 sq ft to 1,679 sq ft.

The two penthouses, at 2,734 sq ft and 3,735 sq ft, each have a private roof garden, swimming pool and pool deck. The development boasts fittings and finishes from notable brands including kitchen appliances by Gaggenau and imported kitchens by Hoffen.

Sing Holdings chief executive Lee Sze Hao said yesterday that about 50 per cent of the freehold project was sold during a recent preview.

Residential projects in the pipeline are Meyer Residence on the East Coast, an 85 per cent-owned project, and a joint-venture project called The Laurels at Cairnhill.
Posted by Richard Yeo at 11:36 PM No comments: