由于全球主要国家都纷纷印制钞票来救市，麦俊荣指出，许多投资者也担心未来一两年将出现高通货膨涨率，因此买资产以保值。
Posted by Richard Yeo at 11:53 PM No comments:

租金方面，全岛私宅租金在今年第一季下跌了8.5％，但于第二季放缓至下跌5.2％。办公楼的租金跌幅也由下跌10.7％放缓至下跌7.7％，商店的租金则从下跌3.3％放缓至下跌2.0％。只有工业房地产的租金连续两个季度都下跌5.6％。
Posted by Richard Yeo at 11:52 PM No comments:

新组屋方面，建屋局打算在今年下半年推出6000间预购组屋，超过三分之一是三房式或更小组屋。大部分新组屋将位于榜鹅新镇。
Posted by Richard Yeo at 11:50 PM No comments: 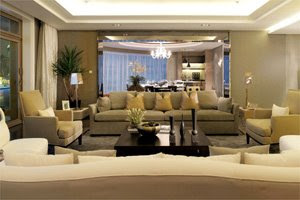 他也说：“国际金融中心一般需要约60万名境内外金融人才，而当前上海金融业即使把（普通）人力都算上，也只有12.8万，显示后进者将大有人在。这些财力雄厚、注重品位与地位的专业人士，一旦陆续进驻上海、陆家嘴，对房地产所产生的强大购买力，可想而知。”
Posted by Richard Yeo at 11:48 PM No comments:

The resale prices of HDB flats rose by 1.4 percent in the second quarter of 2009.

This comes after a slight drop of 0.8 percent in the three months ending March. 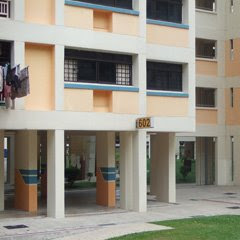 The jump in the second quarter was higher than an initial estimate of a 1.2 per cent increase made earlier this month.

The median cash-over-valuation or COV amount among all resale transactions continued its declining trend.

"COV has further declined, and this would have attributed for more buyers looking towards resale rather than the BTO or DBSS. Because either BTO or DBSS will take 3 to 4 years before they can get the keys to their respective houses. And this trend is expected to continue as long as the HDB COV is low, there will be greater demand."

HDB flats which sold above valuation accounted for 57 per cent of all resale transactions in the second quarter, down from 62 percent in the previous quarter.

HDB also announced plans to launch 6,000 new Build-to-Order flats over the next six months, of which some 2,400 units will be 3-room or smaller apartments.

The bulk of the new flats will be in Punggol.

In the HDB rental market, rents for 3-room, 4-room and executive flats fell by $100, but remained the same for 2-room and 5-room units.
Posted by Richard Yeo at 12:07 AM No comments:

Analysts say the worse is over for Singapore's private property market even though private home prices continued to fall in the second quarter. 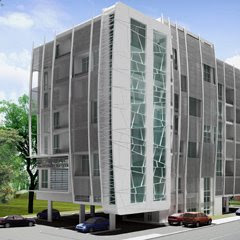 Citing a recent surge in Singapore's equity market, a spate of new developments being launched and an influx of foreign buyers, the analysts forecast home prices turning positive as early as next quarter.

Although it's the fourth quarterly decline in residential property prices, it's less than URA's initial estimate of a 5.9 per cent drop announced earlier this month, and a far cry from the 14.1 percent plunge in the first quarter.

"More and more buyers are confident that the global and Singapore economy is on the way to recovery and there is also a lot of pent up demand especially from the HDB upgraders. The market is also supported by foreign buyers from countries like China, Indonesia, India...some even come in quite a big way, some institutions are looking for a bulk purchase."

She attributes this to strong market sentiments from buyers worried that home prices may rise again after having corrected from peak levels.

The URA data also showed activity in the sub-sales market, which more than doubled to 940 in the second quarter, accounting for more than a tenth of all sale transactions in the quarter.

Managing director of Cushman and Wakefield Donald Han says this indicates the presence of more speculators in the market - which may not necessarily be a bad thing.

"The improvement that we're seeing certainly would attract a lot of investors, let it be investors or specu-vestors - people who can hold a little bit longer but the intention is still to sell, into the marketplace and I think even if there is speculators in the market, they still play an important role in terms of trying to create liquidity and I think there is a role for both long term as well as short term investors in today's market."

Private residential rents also fell 5.2 percent in the second quarter but moderated from an 8.5 percent fall in the previous quarter.
Posted by Richard Yeo at 12:04 AM No comments:

THE sizzling-hot property market and the rush by buyers to secure choice units have led some property agents to turn greedy.

Some agents are offering potential buyers their services to secure a booking for their choice units if they pay them a commission. This has prompted at least two marketing agencies to warn their agents against this practice.

This scheme is reportedly rampant at the freehold Meadows@Peirce development near Teachers' Estate, which is supposed to be open for preview only from today.

Some marketing agents, however, told Today that it is the potential buyers that are offering commissions to agents to secure for them their choice units.

The fee earned by these agents is said to be about 1 per cent of the property value. With unit prices at Meadows@Peirce ranging from $900,000 to more than $1 million, these agents could potentially earn between $9,000 and more than $10,000 for each unit that they can secure for an eager buyer.

In an email to its 3,000 associates on Wednesday, ERA Realty Network, one of the marketing agents for the project, warned: "Please do NOT collect commission from buyers for Meadows@Peirce or any other projects. Anyone caught doing so will be terminated from ERA and no commission will be paid to the associates."

"We want to stop it before anyone receives a commission. It is not right," he added.

Of late, ERA has been cracking the whip on its agents in an industry where complaints of rogue or ignorant agents are rife. Last week, ERA warned its agents against submitting transactions under the names of senior colleagues to garner a higher share of the commissions.

And in February, a couple successfully sued ERA after its agents profited from "flipping" an apartment they were engaged to sell. The couple had sold their apartment through ERA agent Jeremy Ang, but it turned out that the buyer, Ms Natassha Sadiq, was the wife of his boss Mike Parikh, a senior director at ERA. She immediately resold the unit for a $257,000 gain.

Another marketing agent for Meadows@Peirce also issued an email warning a few days ago. Knight Frank reminded its 700 agents that they cannot receive or ask for commission from buyers, cannot collect an entrance fee into the showflat and cannot ask for blank cheques, which can subsequently cause the buyer to feel pressured to make a purchase.

The company's executive director Foo Suan Peng said: "This is something we don't condone because it will give rise to conflict of interest."

Agents Today spoke to said the "fee for secured booking" practice happens with other projects, too. One said there was "nothing wrong" for buyers to pay agents, as both are willing parties.

Singapore Accredited Estate Agencies chief executive Tan Tee Khoon disagrees. He told Today: "The agent receives a commission from buyers when they are already hired by the developer to provide the services. That is unethical."
Posted by Richard Yeo at 12:01 AM No comments: