Before you get tempted by that one-of-a-kind apartment in Melbourne or that previously unaffordable flat in London, it would be a good idea to check out your financing options. 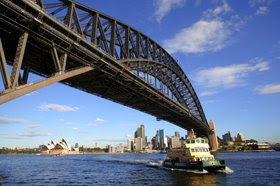 Depending on where their properties are located, investors can head straight for a lender in Singapore or approach one that can refer them to the relevant overseas branch.

They can also try to find a lender in the country where the property is located, but this can be a waste of time as most lenders will not lend to a non-resident, experts said.

Banks such as Standard Chartered Bank and United Overseas Bank (UOB) will put investors in touch with their teams in the relevant markets. UOB, for instance, offers loans for overseas homes in Malaysia, Thailand and Shanghai, China - places which may not be covered by some foreign banks.

Standard Chartered Singapore can leverage on its global footprint. But, for those looking to invest in offshore homes in Australia, the United States, Canada and Europe, including Britain and France, it will refer them to Lloyds TSB Bank, an arrangement it has maintained since 2006.

Lloyds TSB and banks such as the National Australia Bank offer overseas property loans from Singapore. The former, in particular, has the widest jurisdiction when it comes to such loans as it covers 11 countries including Britain, France and New Zealand.

Overseas property loans can be taken in various currencies, but you face quite a bit of risk - including possible capital losses - as they will be subject to currency fluctuations.

'The Australian banks with operations in Singapore had a bad time last year as many of their clients opted for Singdollar lending and got caught out on the currency exchange, losing thousands of dollars in equity and causing many margin calls,' said Mr Steve Douglas of Smats, an Australian property finance and taxation portal.

'Some of these banks even had to stop lending for a while, not because of a bad property market but because of bad lending practices as they did not properly inform their clients of the real risks of multi-currency lending.'

Mr Barry Lea, chief representative of Lloyds TSB Bank, said: 'Generally, you can't go hugely wrong matching your loan with your fixed or liquid assets. If you have the option to switch between the two, you will have the flexibility to mitigate your risks.'

Because of the global credit crunch, taking an overseas property loan is not as easy as in the past. 'Banks have generally tightened their loan approval criteria in view of increased risks due to the ongoing financial crisis and the fall in property prices,' said the founder of www.HousingLoanSG.com, Mr Dennis Ng.

Instead of keeping to a typical loan-to-valuation ratio of 70 per cent to 80 per cent in the past, banks are now generally more comfortable with giving a loan for up to 60 per cent to 70 per cent of a property's valuation, experts said.

Mr Lea said the ratio can be as low as 50 per cent in some US states. It rises to 65 per cent to 70 per cent in Australia, New Zealand and Britain and can possibly be higher for single-currency loans from some lenders, he said.

A property's valuation is also something investors should watch out for as prices in many markets are still falling. 'Any distressed sale of properties might affect sentiment and the market valuation of properties,' said Mr Ng. He advised investors to make sure the banks can match valuation to the purchase price as the buyer has to pay for any shortfall between the price and valuation.

Investors should apply for in- principle approval to ensure that they have a lender's support before they buy an overseas property, said Mr Lea. 'It will also save them time and trouble if they intend to go overseas to look for a property and they can wave it under the nose of a vendor so as to substantiate their means.'

Fees for certain countries have also increased somewhat over the last 12 months or so, to reflect a risk premium and higher capital cost of funds, said Mr Lea. For instance, the arrangement fee has gone up for British and Canadian properties, he said.

Given the level of uncertainty due to the economic downturn, investors should be even more careful in considering all aspects of borrowing, and not just the interest costs, he said.
Posted by Richard Yeo at 9:18 AM No comments:

The latest condos have fancy names that people cannot pronounce or are misnomers.

Home buyers may be drooling over the latest stylish new condominiums, but once they move in, they might face a tongue-twisting time.

That is because developers sure have got creative in the latest condo name game. 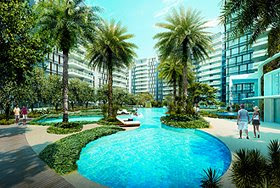 There is no bay near Double Bay Residences (left) in Simei. -- PHOTOS: UOL.

But it could translate to a word puzzle once hapless home owners move in and give directions to visitors.

Telling a well-travelled friend to 'Take me to the Caspian' might have him wondering why you want to suddenly go around the world to the Caspian Sea in Russia.

But no, you would be meaning Caspian Condominium near Singapore's Lakeside.

And be careful if you ask the friend to 'Come and visit me at Double Bay this afternoon'.

He might assume you have moved to Australia as Double Bay is the name of a famous, ultra-expensive suburb in Sydney.

But you are really closer to home, at Double Bay Residences at Simei on the east coast.

E-mail someone to visit you at The Arte, and your visitor might find that his taxi driver has taken him to an art gallery.

Worse, if you were a smartie and asked for somewhere art-ee, you might find yourself at the MRT.

For the record, the 336-unit The Arte condo in Thomson Road is pronounced as 'art'. The 'e' is silent.

Condo names come and go in waves of fashion, and where once monickers with @ in them or the word One were 'in', the latest trend is for fancy, posh-sounding names.

Developers say a well-chosen name can complement and enhance the development and helps to brand and define its positioning.

A spokesman for City Developments (CDL), developer of The Arte, says 'arte' is Italian for art and that the name is a 'fitting reflection of the unique visual statement that the iconic design of the residence makes, which elevates architectural aesthetics to a work of art'.

In addition to mispronunciations, there are misnomers.

The latest condominium project to be launched in Simei is Double Bay Residences, which oddly enough is located in an area where not a single bay is in sight.

Developer UOL Group says the 646-unit project was named after Sydney's Double Bay because it has similar attributes.

The Double Bay residential suburb is in the east of Sydney near the city's commercial centre and near Bondi Beach.

UOL says that like the Australian suburb, Double Bay Residences is in the eastern part of Singapore, near the Changi Business Park commercial district and the beach at East Coast Park.

The property developer has other projects with more apt names: Newton Suites in Newton Road and Duchess Residences in Duchess Road.

As for Caspian, a condominium in Boon Lay Way, a spokesman for developer Frasers Centrepoint Homes says the name was inspired by the Caspian Sea.

This is the largest lake in the world, which borders Azerbaijan, Russia, Kazakhstan and Iran.

'It is surrounded by several islands, some of which hold significant geopolitical and economic importance,' says the spokesman.

She adds: 'Our project was similarly named because of its strategic location in the Jurong Lake District, which is an upcoming business, leisure and educational hub that promises home buyers a quality and vibrant lifestyle.'

According to CDL's representative, various factors such as a project's neighbourhood, views and architectural theme are considered in coming up with a name.

The Frasers Centrepoint spokesman says names chosen should be 'tasteful, can be pronounced easily and have no negative societal or religious connotations'.

Still, not everyone is attracted to a project just because of its name.

'The right location, price and size of the apartment are still more important than the name,' says financial consultant Tommy Lim, 35, who is looking for a house.

Big And Cheap Condominium, anyone?
Posted by Richard Yeo at 9:15 AM No comments: