How Asia Will Be Hit

And how it can seize the opportunity and surge forward

WE NOW have a perfect storm with the perfect ingredients — easy liquidity, poor alignment of incentives, inadequate assessment and management of risks, greed, and lack of due diligence. 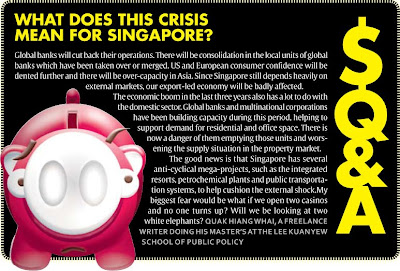 The surge of the energy price — a bubble of its own — was the catalyst. To fight inflation, the United States government hiked interest rates. The housing bubble burst and mortgage default surged. With property foreclosures and defaults in mortgage payments, mortgage-backed securities were now viewed as high risk with low value. When large investors holding them attempted to unload their holdings, the action spiralled into even lower valuations.

But, the bad news did not stop there. At the beginning of the sub-prime crisis, the US government did not take decisive actions; instead, it still played the interest rate game. Fundamentally, the US borrowed too much. One could counter that by producing a lot of income growth. Unfortunately, with globalisation, the US economy now only made up about a third of the world economy. Thus, the US monetary authorities could not readily generate a surge in the US economy.

The recent spate of write-downs of losses arising from bad investments was the right thing to do, but, they came a little too late in the game. Without a clean revelation, investors were suspicious, especially after seeing some losses. The result is a systemic large-scale markdown of the real value of many financial instruments, largely stemming from fear.

The US government’s attempt to alleviate fear in the financial markets by bailing out some, but not all, had the unintended consequence of heightening investor suspicions. Trapped investment banks now found refinancing capital even more expensive. One after another, the banks had to either create a bailout (call it accepting a fire sale) or file for bankruptcy.

What this means for Singapore

The financial turmoil has real consequences on the economy. If we get up in the morning and find that our financial assets have dropped by $200,000, what would we do? We would scale down our expenditures, perhaps not dining out and having a simple home-cooked meal instead. The financial meltdown drags down our consumption levels. The high cost of capital also discourages corporate investment. We have a severe economic downturn in real terms.

Asians are affected in two ways. First, the slowdown in US consumption and investment affects our exports, and thus our earnings. Second, the losses in the US suffered by Asian banks and other financial institutions damage their books and their ability to lend. Tighter credit curtails investment. (We hasten to add that not all Asian banks are affected equally. For example, Singapore banks have insignificant exposure to Lehman’s instruments while Japan and Taiwan banks have billions. Credit is available in Singapore in a prudent manner.)

LESSONS TO BE LEARNT

This is not a simple storm and it will take time for it to pass. It is not clear what the best course of action should be. Yet, a few things are clear.

First, financial institutions should make clear what they have suffered and recognise the losses. The Japanese financial firms’ coming-out action in this regard is the right move, although it does not spare them from negative market reactions to the exposure. But not doing so will only heighten investors’ fear and worsen the current credit crunch.

Fourth, we should learn from this crisis. It teaches us to recognise the need to evaluate how and where financial innovations and policy initiatives will challenge our regulation and market systems. In the sub-prime case, the noble initiative to encourage home ownership and fancy financial engineering created a breakdown in the otherwise sound public regulations and monitoring system of the US.

Finally, for me, I hold on dearly to the maxim: Do not invest in what you do not know.

The writer is Dean and Stephen Riady Distinguished Professor of Finance, NUS Business School.
Posted by Richard Yeo at 9:10 PM No comments:

Vietnamese women of the night have long taken over a certain stretch of Joo Chiat Road, but they have not taken away the general laid-back charm of the cosy neighbourhood, something not easily found elsewhere.

Although property prices have risen in the area in recent years, they remain below those in more popular nearby areas such as Katong and Amber Road. And for shophouse lovers, this is an estate worth checking out. 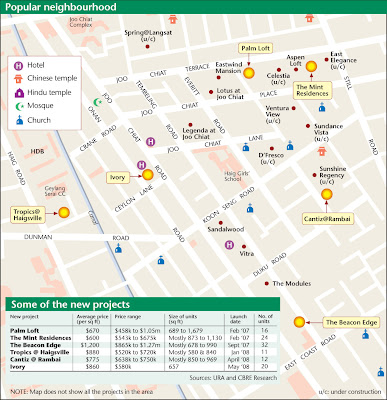 Amid the shophouses, conservation houses and landed homes, Joo Chiat has mostly small and low-rise developments. The area has a rich heritage and a distinct identity.

It is known for eateries that serve mainly local cuisines. Some of these have built up a loyal clientele over the years.

'Joo Chiat is not a dodgy area. It is a good and established residential area,' maintained the MP for Joo Chiat, Mr Chan Soo Sen.

'The presence of foreign women in bars,' he pointed out, 'is confined to a 50m stretch of Joo Chiat Road.'

This stretch is in the Blue Zone, a term coined by residents because of the bars found there, such as the Blue Lagoon Lounge, which is on the Geylang Serai side of the road.

Although the Vietnamese women can be seen gathered in coffee shops or standing around bars along that stretch, they do confine themselves to the area, said Mr Colin Chee, spokesman for the Save Joo Chiat group.

This neighbourhood group was formed in 2004 by residents who were alarmed by the sudden proliferation of bars in the area and the large number of scantily dressed women wandering into their estate in the evenings.

Joo Chiat is as safe as other parts of Singapore, Mr Chan said. 'The police told me there was no evidence of higher crime statistics in Joo Chiat.'

A business operator in the area, who declined to be named, said the efforts of the MP, the authorities and the community had led to the shutting down of several major bars and massage parlours over the past few years.

'But Joo Chiat is not saved yet as the sleaze element remains. That element is not welcomed by other businesses in the area or by the community,' he said.

The hotels along Joo Chiat Road that charge hourly rates are patronised largely by the Vietnamese women and their clients, he said.

These women, who come to Singapore on social visit passes, stay illegally in private apartments, houses and even HDB flats in the area, he added.

Still, the area has a unique charm and is changing for the better as fresh residents move into newly built developments or refurbished shophouses.

According to Mr Chee, who is a manager in a foreign firm, more yuppies and expatriates are moving into the area.

The business operator confirmed this trend, saying: 'I see success stories in many forms, from the new artists and design studios that are coming in to the food establishments that are re-inventing themselves.'

New business operators have also zoomed in on the area, hoping to convert shophouses or old buildings into boutique hotels.

As part of efforts to retain the heritage and architecture of key buildings in this area, Joo Chiat was gazetted as a conservation area in 1993, according to the Urban Redevelopment Authority (URA). Shophouses and terrace houses along Joo Chiat Road, East Coast Road and selected streets have been conserved.

Rows of old shophouses, too, have been bought en bloc and refurbished. Such work is still going on and Joo Chiat boasts quite a few beautiful examples. For instance, Lotus at Joo Chiat, a service apartment development that comprises 32 apartments and 17 conservation shophouses, won the URA Architectural Heritage Award in 2002.

Because Joo Chiat is in district 15, a coveted residential area, it competes with more popular areas such as Katong, Marine Parade, Siglap and Telok Kurau, said CBRE Research.

As these areas also enjoyed a large supply of new projects over the past 12 to 18 months, the take-up of new homes in Joo Chiat has not been as strong, it said. In effect, homes in Joo Chiat are more affordably priced than those in other parts of district 15, it added.

However, demand for shophouses - which are limited in supply - is healthy. Transacted prices for shophouses in Joo Chiat are now around $1 million to $4.5 million, after rising around 20 to 30 per cent over the past year, said the research unit.

More new homes will be coming up in Joo Chiat and the Haig Road area as some 16 projects with 428 units in total are being planned for the area, said CBRE Research, citing URA data.

These new projects, which could have eight to 80 apartments, include the 24-unit Ventura View in Rambutan Road, the 12-unit Esterina in Haig Avenue, the 16-unit Sundance Vista in Koon Seng Road, and the 26-unit Spring @ Langsat in Langsat Road.

Some very recent launches such as D'Fresco and Ivory still have units for sale.


Still a good, safe area 'Joo Chiat is not a dodgy area. It is a good and established residential area...The presence of foreign women in bars is confined to a 50m stretch of Joo Chiat Road.'

MP for Joo Chiat, Mr Chan Soo Sen, who has been part of efforts to clean up the area
Posted by Richard Yeo at 9:06 PM No comments: