It reverses earlier forecast of 10% slide next year, upgrades CDL to 'buy'

Goldman Sachs is now projecting a 5 per cent gain in Singapore private home prices next year, reversing its previous forecast of a 10 per cent fall in 2010. It has also upgraded City Developments, which it terms 'the Singapore residential bellwether', to a 'buy' rating from 'sell' previously.

'The recent pick-up of transaction volumes in the primary residential market is a harbinger of price stabilisation being just around the corner, in our view,' the US bank said in a report dated May 12.

It expects the residential property sector to stabilise by end-2009, ahead of the office and retail sectors, which it sees stabilising around the end of next year.

Goldman Sachs sees the average luxury residential capital value sliding some 38 per cent for the whole of 2009, on top of last year's 36 per cent drop, and the average islandwide 99-year leasehold residential capital value easing 13 per cent in 2009, similar to the 12 per cent fall last year. Much of these price declines have already taken place year to date, and Goldman Sachs sees price stability setting in by year-end.

The 5 per cent residential price increase projection for 2010 will be supported by expected healthy, above-consensus take-up activity that will gradually draw down on supply.

'Firmness witnessed in the mass end of the segment is gradually filtering up to the mid-end segments, though investors are still harbouring concerns over sustainability of demand. What may not be so apparent is the relative wealth of HDB owners,' said the report.

'We expect the pick-up in transaction volumes witnessed over the past three months to continue, driven by HDB upgrader demand in the mass end of the market as affordability has improved,' it added.

'While we acknowledge that there are still overhangs (eg deferred payment scheme defaults) weighing down on the broader sector, we think the risk/reward trade-off in the Singapore residential market is currently favourable,' the report said.

With residential cycles tending to be shorter than commercial ones, Goldman Sachs expects commercial property to underperform when recovery takes place eventually. It also continues to be relatively more cautious about the retail and office segments given the challenges that are likely to affect businesses and consumers over the near term.

'Unlike in residential, where (sales) take-up has been healthy, leasing and transaction activity in the commercial space continues to be weak,' the report noted.

'On the basis that a residential property recovery is in the works, we turn more constructive on the Singapore developers as we see the residential sector leading the property sector recovery. We think property investors (Reits) mainly exposed to commercial real estate will see trends deteriorating into 2010 and are likely to underperform when the eventual recovery does take place.'

In addition to upgrading CDL to 'buy', Goldman Sachs has upgraded Wing Tai to 'neutral' from 'sell' and reiterated its 'conviction buy' for CapitaLand for their exposure to the Singapore residential sector. For CapitaLand, it said that maiden profits from The Seafront and Orchard Residences condos expected this year should help shelter the stock from potential writedowns.

Goldman downgraded CapitaCommercial Trust to 'neutral' from 'buy' and Suntec Reit to 'sell' from 'buy'. It kept its 'sell' rating for Keppel Land, which has substantial exposure to the Singapore office market.
Posted by Richard Yeo at 11:01 PM No comments:

Mandarin Gallery At 85 Per Cent Occupancy

MANDARIN Gallery, the high-end Orchard Road mall now undergoing a revamp, reported an 85 per cent occupancy rate yesterday - five months ahead of its re-opening in October.

Nearby Orchard Central, which is set to open in June, said last month it was 65 per cent taken up.

And another upcoming mall, Ion Orchard, had leased out more than 80 per cent of its space by March, four months before its July opening.

It has already attracted several international fashion brands including Hugo Boss and Mauboussin, which will open flagship stores, as well as new labels like Trioon by upcoming local designer WeiLing Liu.

'The Mandarin Gallery proposition has resonated well with tenants and we are glad to report that we are well on target with our lease projections,' said Patrina Tan, senior vice-president of retail, marketing and leasing for Overseas Union Enterprise (OUE), which owns the mall.

OUE started by defining a core customer base, then sought out specific brands, she said. 'Essentially, our strategy is not to sell space on prime Orchard Road but make our prospective tenants understand how being at Mandarin Gallery will be of relevance to their business.'

However, faced with unfavourable economic conditions, Mandarin Gallery has joined the ranks of Orchard Central and Ion Orchard in using the tried and tested marketing strategy of rent rebates to sweeten the offerings.

'In the first quarter of 2009, when the economy started to feel the impact of the meltdown, we reviewed the terms of tenants on a case-by-case basis and made adjustments, including rent rebates and marketing collaboration assistance, to realign ourselves with their revised projections,' said Ms Tan, who declined to disclose figures.
Posted by Richard Yeo at 10:59 PM No comments:

Developers test waters at some projects by cutting back on discounts

Some developers have quietly started raising prices a notch as they test waters after strong sales volumes seen in the first quarter.

Price adjustments are often made by reducing discount levels. On a project average basis, the effective prices for some developments may have gone up between 2 and 5 per cent compared with levels earlier this year, according to developers and property consultants.

'Developers aren't raising prices overnight. Prices are being adjusted only after clear buying momentum has set in for a project. If you look at the first and last units sold in the project, the price difference could be, say, 10 per cent; but if you look on a project average basis, the price increase would be less than 5 per cent,' says Knight Frank chairman Tan Tiong Cheng.

The recent stock market rally has generated its share of positive sentiment. Even so, property agents say that prices of only the better-selling units have been raised in some projects, while the others have seen more widespread rises. 'Developers are careful; if they push up prices too fast, potential buyers may start looking at other projects,' one agent said.

The recent price adjustments have to be viewed against the significant price declines before that, seasoned players point out. For instance, Q1 2009 prices of mass-market condos were about 10 per cent off the peak levels in late 2007/early 2008, while for luxury condos, the price decline was steeper, at around 30-40 per cent.

DTZ executive director Ong Choon Fah says that developers started to inch up prices in April and May from Q1 levels. 'In the secondary market, sellers have been more aggressive; some are asking about 5 to 10 per cent more than in Q1,' she added.

Property giant Far East Organization's residential projects such as the Mi Casa condo in Choa Chu Kang, The Lakeshore in Jurong, Hillview Regency in Bukit Batok, Floridian at Bukit Timah Road (non-premium units), and Vida at Peck Hay Road are among those that have seen slight price gains lately.

Rival City Developments is also said to have incrementally raised prices for The Arte at Thomson as sales progressed briskly. The developer has sold more than 250 units since it previewed the mid-end project in March.

BT understands that prices of the remaining 80-plus units have been adjusted upwards slightly this week. The average price is now about $900 psf and the freehold project includes a mix of two-, three- and four-bedroom units.

Bukit Sembawang is also said to have introduced a single-digit per cent price hike for later units (apartments) at The Verdure at Holland Road after the initial batch of units were sold.

UOL Group and Kheng Leong are also understood to have upped prices selectively - for better-selling units - at Double Bay Residences in Simei.

A major developer said: 'Demand is better now. People are prepared to come to the negotiating table and not baulk at prices, compared with last year when it was very difficult to even get buyers to sit down. I think there's a sense that the worst is over.'

He says that the quantum of price appreciation that a developer can achieve in the current market will hinge on a project's location, the nature of the development and the profile of its buyers. 'For instance, for a prime district project with a lot of small units costing $1-2 million each, you can adjust prices a bit more, especially if you have a fair number of foreign buyers,' according to the developer. 'Mainland Chinese buyers are more optimistic, and can accept price hikes better as they have seen an upturn in their own property market,' he added.

Mr Tan says that there's currently a 'sweet spot' in the Singapore market for projects priced below $1,000 psf and on a lump-sum basis costing $1 million to $1.2 million per unit (for three-bedroom units) and $800,000 and below (for two-bedroom units). Their prices can take a sub-10 per cent increase without affordability being seriously dented.

Mr Tan argues that a small price increase will not generally price buyers out of the market or send them to the sidelines again - 'especially if they think the worst is over and don't want to miss the boat'.

'Even if the view is that we're not at the bottom yet, there seems to be a greater sense of price stability now. The thinking now is that if prices drop a further 5 or 10 per cent, can I live with it? Three months ago, there seemed to be no bottom,' Mr Tan recalls.

Agreeing, CB Richard Ellis executive director (residential) Joseph Tan says: 'Once people are more confident, they can accept the fact that price may be higher, but in an improving situation. If I believe the market has bottomed, the closer I buy to the bottom, the better it is for me. That sort of thinking is also being fuelled by the stock market rally; traditionally the residential property market lags the stock market by three to six months.'
Posted by Richard Yeo at 10:57 PM No comments:

1.5% fixed mortgage interest rate up in the offering.

STANDARD Chartered (StanChart) in Singapore is the latest bank to unveil attractive home loan packages for homebuyers and owners, as interest in residential property purchases continues to pick up. 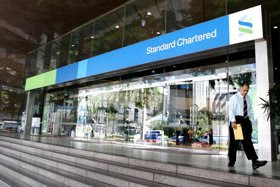 It is introducing a package with a low interest rate of 1.5 per cent per annum for the first year.

For the second year onwards, customers will pay an annual rate equivalent to the three-month Singapore Interbank Offered Rate (Sibor), plus 1.35 percentage points.

The promotion, which applies to any new mortgage taken up with the bank from yesterday till June 15, is part of StanChart's 150th anniversary celebration.

It will also throw in freebies like free valuation, legal subsidy of up to $2,000, and free fire and home content insurance.

There is also an additional perk for priority banking customers who hold StanChart's Visa Infinite card.

A quick check shows StanChart's offer to be one of the more attractive ones in town, particularly if Sibor continues to languish at well below 1 per cent.

A comparable package by Maybank - touted by the bank as the lowest three-year fixed rate home loan in town - fixes its first, second and third year rate at 1.6 per cent, 2.2 per cent and 2.9 per cent, respectively.

There is no minimum loan amount required for application.

For StanChart, the minimum loan quantum is $100,000, while the lock-in period is just two years.

Said StanChart retail banking products general manager Dennis Khoo: 'With this offer, they (customers) can enjoy more flexibility in their finances to be more agile and responsive to market changes.'
Posted by Richard Yeo at 10:50 PM No comments: 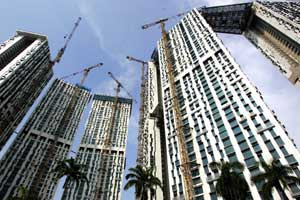