THE Housing Board launched Punggol Spectra yesterday, the third of its build-to-order (BTO) projects in Punggol this year and the first to introduce two- and three-room flats. 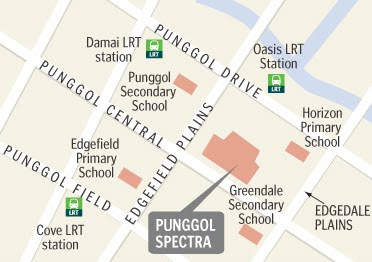 Under the BTO scheme, flats are built only when a certain level of demand is reached.

Located in Punggol Central and a short drive from Tampines Expressway, Punggol Spectra will offer 301 two-roomers, 285 three-roomers, and 556 four-room flats.

First-time buyers with an average monthly household income of $5,000 or less can apply for an Additional CPF Housing Grant of up to $40,000.

PropNex corporate communications manager Adam Tan expects Spectra to be very well-received, as it is the first in the area to offer two- and three-room flats.

'Smaller families will be attracted to these units, given their attractive prices,' he said, adding that the median resale prices for two- and three-room flats across Singapore have not seen such affordable levels for more than two years.

According to HDB, this year's total BTO supply is expected to reach 8,000 units, located in towns such as Punggol, Sengkang and Sembawang.

Applications for the Spectra flats can be submitted online at HDB's website www.hdb.gov.sg until Sept 14.
Posted by Richard Yeo at 12:14 AM