410 Units Snapped Up At Trevista Preview

Singaporeans make up 87% of buyers; even Swiss nationals among purchasers

NTUC Choice Homes has sold 410 of the total 460 units it released for the preview of its Trevista condo in Toa Payoh last week. The co-operative is expected to release more units in the 590-unit project this weekend when it does an official launch, accompanied by an advertising campaign, for the project. 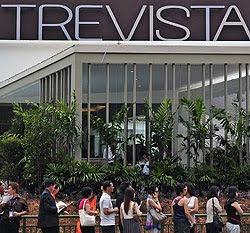 Worth the wait: More units in the 590-unit project are expected to be released at its official launch this weekend

Singaporeans picked up 87 per cent of the total 410 units. Permanent residents made up 7 per cent and non-PR foreigners, 6 per cent, of buyers.

The majority of PRs and non-PR foreigners were from China; some were also from Indonesia and Malaysia; there were also a few Swiss nationals, an NTUC Choice Homes spokeswoman said.

She said 70 per cent of the buyers have HDB addresses and the other 30 per cent, private addresses.

About 80 per cent of buyers purchased on the normal progress payment scheme. The remaining 20 per cent who opted for interest absorption scheme are being charged a 2 per cent price premium, the Choice Homes spokeswoman said.

When sales in the 99-year leasehold condo began on Friday morning for the first batch of 210 units, the average price was $898 per square foot, but with two subsequent batches of additional units released, prices were adjusted marginally upwards, although this also had to do with the newer units being on higher floors and having better orientation.

The average price currently is understood to be around $920 psf.

What's left are a limited number of two-bedroom units, with the majority of what's available being three- and four-bedroom apartments, BT understands. The remaining 130 units in the condo are expected to be released this weekend and they include prime pool-fronting units.

Trevista is being marketed by CB Richard Ellis and ERA.

Over at Ridgewood Close in the Mount Sinai area, Singapore Land is understood to have sold slightly more than 100 units at its preview of Trizon, a 289-unit freehold condo.

Two of the project's three blocks have been released for sale. The units were priced between $1,250 psf and $1,550 psf and buyers are understood to be mostly Singaporeans with some foreigners (predominantly Indonesians).

SingLand is selling the 24-storey project with only the normal progress payment scheme. It will hold an official launch of Trizon this weekend.
Posted by Richard Yeo at 12:06 AM